Fried Rice and Fellowship – Days Of My China Dragon 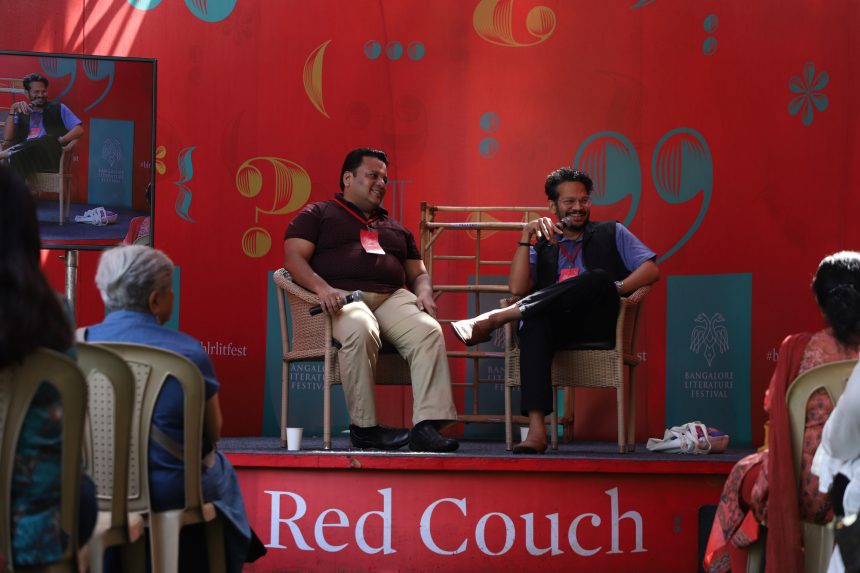 First session of day 2 of BLF 2019 and one would have thought it would be a dampener given the heavy outpour of previous night. But that is not namma Bengaluru!

The session was a conversation on the power of food to nourish and console. It had Chandrahas Choudhury, the author of three works of fiction, Clouds, Arzee and Days of my China Dragon and Rupesh Pai, a Mumbai based entrepreneur who managed his father’s Udupi restaurant back in 1992 and made it into the Chinese restaurant.

Chandrahas and Rupesh unfolded their journey together dating back to a decade in Mumbai. Chandrahas first met Rupesh when he moved to Mumbai in a rundown apartment in Prabhadevi. On a rainy night he went to Rupesh’s restaurant and there was no looking back since then.

Chandrahas has been a self-employed writer throughout. He got sucked into the multifaceted world of dragons through Rupesh’s restaurant ‘China Dragon”. This is where he realized that economics was not the measure of life. He very beautifully compared the writing of fiction to running a restaurant. Both have to understand people and make people happy in the short time they enter your world.

Rupesh added that to know every customers taste was very important and they ensured that they treated each customer personally.

Chandrahas reminisced how he missed the unlimited access in afterhours to the restaurant. The book is a representation of the afterhours of people who work in a restaurant. How the restaurant employees never ate the same Chinese food that they served. The restaurant represented a little India to him. A school of character where waiters would analyse customers and human nature.

Chandrahas added that he had really grown to enjoy Mumbai seeing tough people hardened by life’s journey. How it brought joy to people being called ‘sir’ and be served by a waiter. Difference between business and hospitality is not just to serve but make the time warm. People will come in certain mood and leave in another. Customers would confess their worries. A restaurant is not just a pace to get food but a cross between a theatre and a therapy centre.

Rupesh engaged the audience with his journey in the restaurant business. How he started it when he was 11 years old. The age gap between his father and himself was forty-five years but he learnt everything from cooking and serving from his father In 1992 when he joined his father’s restaurant business was also the time of Hindu Muslim riots. How the Mumbai blast did not affect the daily operations. Mumbai is a city that never sleeps.  He quoted some phrases in Mumbai accent which got many in the audiences relate to Mumbai. (“Uska dil jeetna hai toh uske pet mei ghuso”. Aaisa khilao jaisa uski biwi ne bhi nahi khilaya”).

Rupseh also spoke about the discipline that his father had and how he was charged rent to run his own restaurant that taught him a lot about running businesses. He spoke about the tough time he had to convince his father when grilled sandwiches were making way in Udupi restaurants.

Chadrahas’s book “My days of China Dragon” depicts many invisible characters drawn from the real life of Rupesh’s actual restaurant.They spoke about the shared life from which the book has emerged.

Chandrahas then had the audience quiet and attentive when he read a passage from the book about a character Pintu from Kolhapur – “portrait of a waiter from a young man”. It was heartening to know about Pintu’s journey and struggles. “Nothing like a restaurant to test a man’s character and nothing like a man’s character to test a restaurant” line struck a chord. Pintu was described as eager, sweet, nervous and out of place in Mumbai. Pintu thought only the rich wore a second layer of clothes. He did not understand the Chinese dishes as he came from the simple daal-bhaat family. Some very catchy lines to describe Pintu’s journey in Mumbai like “Long twisting noodle like road of life” left the audience with a warm relatable smile.

Chandrahas also confessed that he loved philosophizing some of the stories. He feels that the restaurant was the greatest university in life with no fees but so much learning.

There was a friendly banter between Rupesh and Chandrahas that was refreshing. Rupesh fondly remembered his times in the restaurant and his role to ensure all his waiters felt comfortable and at home. (He used phrases like “aye pintu kidher jaa raha hai re? mai hai na”.) The camaraderie with waiters and customers was narrated too.

Chandrahas and Rupesh had similar thoughts on how Swiggy or Zomato deliveries can never replace a small restaurant experience. Parcelling food loses its taste and the personal touch of being served. Plastic also has a chemical reaction that spoils the taste of food. The restaurants are to stay for a long time to come. On this note this very endearing conversation ended leaving the audience with a very encapsulating feeling and leaving them hungry for more!

Neha Agrawal is an expressive-impulsive woman with the halo of positivism and energy, a smile that emanates from the heart and wants to reach out to the world. She loves books, children, rawness, originality, and nature – not in any particular order. A budding poet and a writer under the handle #fursatkealfaaz on instagram. She currently writes for TheSeer.