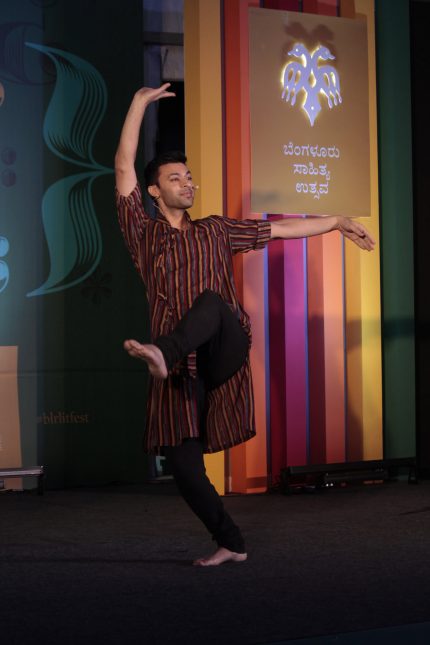 The stage was set for what was going to be one of the most mesmerizing dance performances and social statements all blended into one. Revanta who is a dancer, choreographer, and actor from Ahmedabad started off on a very strong note talking about how many of the older Bharatnatyam pieces consisted of mainly solo performances by women and how that has evolved today with the men also coming to the forefront, depicting alternate stories. He described how one of the pieces he performed about Ekalavya taught him about untouchability and it is through dance that he learnt about gender fluidity.

Next he spoke about the Hindu trinity of Gods – Brahma, Vishnu, and Shiva and their context in modern life and climate change. He then broke into a beautiful dance performance about how humans had not respected our planet, which is God’s creation, and essentially insulted our creator. A verse from the performance read – “We are destroying trees, and melting mountains, O Lord of destruction, We are destroying the world ourselves”.

As the music faded, without stopping for a breath, he told us the story of Nandanar an untouchable devotee who longed for acceptance. He further added- “Perhaps the Nandanars of today will not take it lying down and perhaps the privileged will ask the right questions.” This was followed by another beautiful dance piece that was so immersive that the audience broke into a huge round of applause.

But the best was yet to come. Revanta now spoke about modern love, modern long distance relationships and our crippling dependency on technology. He then gave us an insight into how he along with his mentors had developed a piece that spoke about modern love problems while keeping the core essence of Bharatnatyam. Once again the music started, and he performed that particular piece for us. The audience could not stop smiling and applauding as he depicted through his movements how long-distance love survives by swiping phone screens, and phone calls and video calls. It was an intelligent and wonderful piece that combined old tradition and modern life.

What Revanta did with his session was remarkable. He made very strong and socially relevant statements while also displaying his core art form of dance. He has taken a traditional dance form and made it cutting-edge, honest, immersive, and relevant to the society and times we live in.