How I Became a Hindu: My Discovery of Vedic Dharma - BLF 2018 Reports - Bangalore Literature Festival (BLF)

How I Became a Hindu: My Discovery of Vedic Dharma 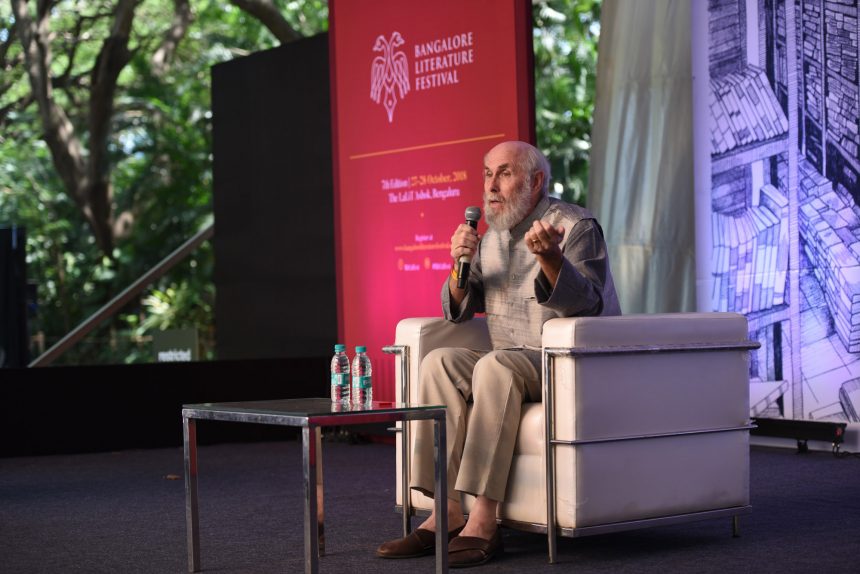 David Frawley spoke on ‘How I Became a Hindu: My Discovery of Vedic Dharma’ at the creatively named venue ‘Adjust Maadi’. Dr. David Frawley (Pandit Vamadeva Shastri) is a Vedic teacher and Hindu Acharya. He is the author of fifty books published in twenty languages worldwide. His fields of expertise include Yoga, Ayurveda, Vedanta, Jyotish and ancient Vedic texts. He has also written extensively on historical, social and cultural issues facing Hinduism and India today. Not to shy away from discussing contentious issues, Dr. Frawley began with describing his work of promoting vedic education, all paths of yoga, vedanta, jyotish, ayurveda, and other realms of the Indian system of knowledge under one umbrella of the Sanatana Dharma.

While stressing on the popularity of the Indian systems, he said – “India is not just a modern nation. India is millennia old vedic civilization that went inside the consciousness behind the universe. However, presently, modern India has lost its connection with its traditional systems.” He mentioned that there was no one Holy Book or one God or one Guru for the Hindus. There are more festivals, more Gods, more Gurus, more sampradayas, more books in the Indian system than in any other country or culture of the world. He added that the Indian festivals in particular should be regarded as World Heritage. He also pointed out that the courts in the United States did not interfere in the matter of religions and even the Indian courts did not do that in the matters of other religions. However, for Hindus, the courts and the state are controlling the religion from outside. Commenting later on the Sabarimala verdict of the Supreme Court, he asserted that when the courts and the state had no stake in the matters of religions and when they did not consult any of the Hindu Acharyas on such matters, they did not have the right to pronounce such a judgement.

David Frawley comes from a Catholic background and got interested in the Indian systems during the 60s movement, thanks to the Beatles, Maharishi Yogi, Prabhupada, Paramhansa Yogananda who he considers to be the Father of Yoga for the West. What he found lacking in the western philosophies, he found in Buddhism, Hinduism, and other eastern traditions. Gradually, he also studied Advaita Vedanta, Ramana Maharshi and Sri Sri Aurobindo’s works. He started correspondence with Anandamayi Ma and M.P. Pandit of the Sri Sri Aurobindo Ashram who later published his works in India. About 30 years ago, he was advised to become a Hindu and realizing he was already living the life of a Hindu, he adopted Hinduism. He continued his work on the ancient wisdom of India and was soon faced with ridicule for debunking the Aryan Invasion theory and showing Hinduism in positive light. Without naming the journalist of The Week magazine, Dr. Frawley informed the audience that the hatred amounted to him being labeled as a well known fascist. However, defending his position, he added that for the issues he had stood for in the United States, he had often been labeled as a leftist.

Dr. Frawley also expressed his bewilderment over the love Indians gave to Freud and Marx. According to him, all of Freud and Marx could be contained in a small corner of Aurobindo’s or Adi Shankara’s works. Dr. David Frawley appealed to the audience and the Hindus in general to become Sadhakas or practitioners instead of becoming academics in their traditional systems. “The Hindu wisdom is universal in nature and as such is relevant to everyone. The great knowledge of ‘I’m neither this body nor this mind’ comes from the Vedanta and the exposition of this thought must come from the inner practitioners and not the academics. Hindus must assert themselves because others are doing it already. They should understand and practise their wisdom and spread it to the whole world.”, he added.

Dr. David Frawley believes that India can only rise as India or Bharat and not by some imposed idea from outside. Q&A followed his concluding remarks where he answered questions on inner spiritual growth for the urban youth. He took up other subjects as well and impressed upon his audience that the idea that one can only be a born Hindu and not a convert was a propaganda, and the courts shouldn’t have intervened in the Sabarimala issue.

About the Author – Abhishek Kumar Jha is Founder Editor and Writer at www.bookstalkist.com.