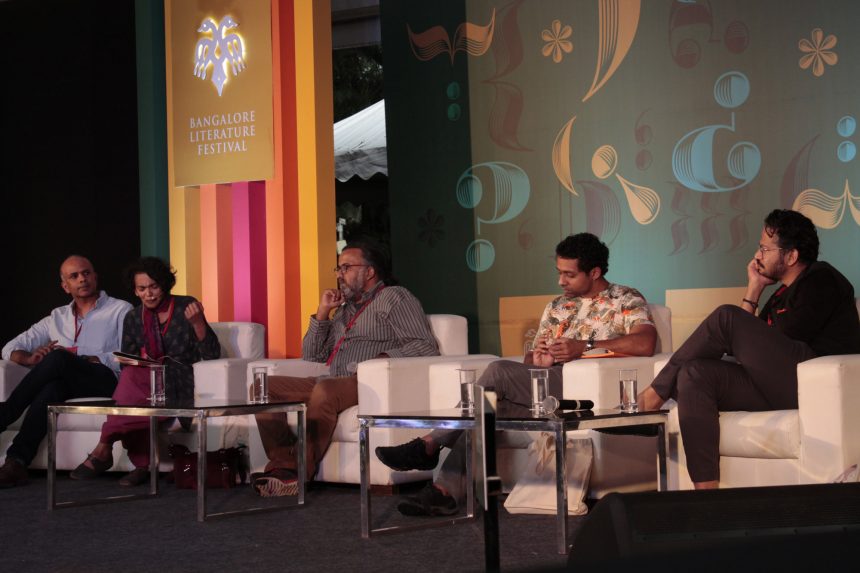 A conversation with writers Amitabha Bagchi, Chandrahas Choudhury, Deepak Unnikrishnan , Mahesh Rao anchored by Karthika Nair was initiated with the fundamental question – “How do men write women characters? Is gender the greatest distance you have to traverse while writing your characters?”

Chandrahas who is the author of ‘Clouds: A Novel’, said that he actually did not think that gender was a large gap to bridge. He felt comfortable writing about women characters but found the character of a tribal boy in his book hard to crack. He said that this was because he had not lived that life or had any first-hand experience of it, so even though it was a male character he found it hard to get into his mind and write about him.

Mahesh who is the author of the award-winning book ‘The Smoke is Rising’, said that for him, gender was the least distance to cover. He said that he writes from observed experience. He watched and learnt from the different women in his life and it came quite naturally to him. He further added that he never thought that it was odd for a man to write from a woman’s point of view. He believed that a writer needed to inherit his characters complexity, irrespective of gender.

Amitabha, author of ‘Half the Nights Gone’ then pitched in to say that men become men by answering questions raised by women. He said that essentially if a man can understand the place of origin of the questions and make an honest attempt to answer them he can quite easily assess a woman’s perspective, get into her mind and form female characters for his stories.

Deepak who is the author of ‘Temporary People’ shared a personal anecdote with us. He said that as a young boy growing up in Abu Dhabi, he went to school in the afternoon when the girls would leave and when he and his friends stood at the gates watching the girls walk out of the gates, they would cook up stories about them. He stressed about how they knew nothing about these girls but were able to perceive what kind of life they probably led. He further reflected how finding a voice for his characters was important to him and how he reached into his memory to find the voice of his grandmother and his great grandmother which he later used in his characters.

Wrapping up the session, Karthika then brought up a very important question to all the writers on the panel, asking whether post the “Me Too” movement they would think about how they wrote their female characters. Almost unanimously the panel said that yes they do think about these things and police themselves to make sure they are not creating stereotypes or writing poorly about women. They felt that this should have happened earlier itself and it probably did in pockets, but now that it has all come out in the open, it was important for all writers to think about how female characters lend themselves to the story.