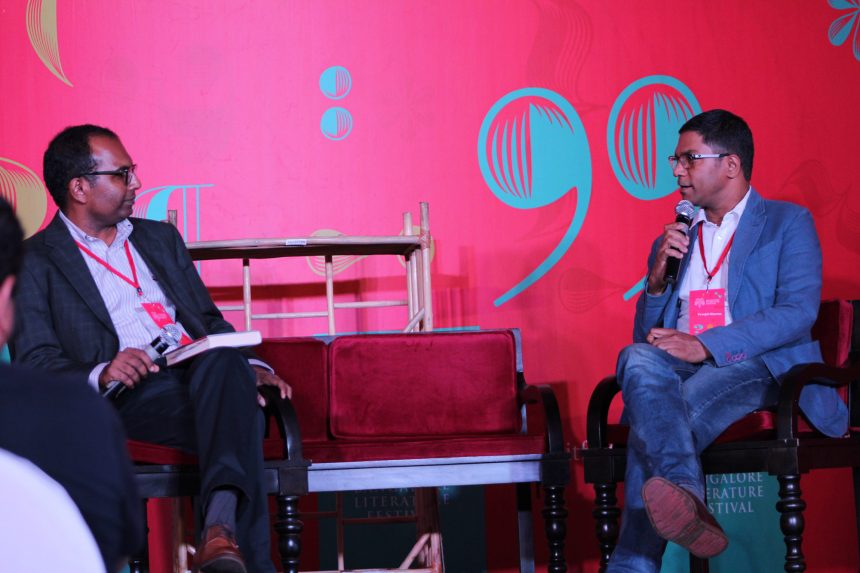 The session commenced on time at The Red Couch venue with Pranjal Sharma taking the lead who is an economic analyst, advisor and writer, focusing on technology, globalisation, and media. He guides projects on economic forecasting, business intelligence, and public diplomacy with Indian and global organisations. Pranjal creates and develops research projects that interpret policy impact on industry and society. He is a frequent speaker at events run by leading chambers of industry on policy advocacy and leads public discourse at several platforms in India and abroad. These include AIMA, the St Gallen Symposium, Horasis Global Summit and the web submit.

His book ‘Kranti Nation’ published in 2017 was an instant hit amongst the youth. He briefed  about his vision behind his latest release which is “Automated India”. He began his argument by explaining the need for an automation injection to the country. He backed his support towards an automated nation by bringing in the facts regarding the current employment state of the country and drawing parallels from the past and present. He made his perspective clear by elaborating on the loopholes of current education and empowerment state of the country. Making the listeners aware about the rising automation he claimed that a 3-4 year college course degree can not calculate the potential of any aspiring millennial. He defended his stance in favour of establishing automation in the country irrespective of the huge population and its ability to absorb automation by talking about the aids that the automated world has to offer. He enlightened the listeners by telling them about the loopholes in current structure of private sector which has led to a lot of fraudulent events like Punjab National Bank scam monitored by Nirav Modi. Pranjal talked about eliminating discretion through automation as well as making it relatively easier for the government sector to conduct safe online auctions. According to him, his book covers the 4th industrial revolution which is absolutely egalitarian. With rapid development in artificial intelligence (AI) and robotics technology, automation is at a tipping point. Today, robots can perform a slew of functions without considerable human intervention. Automated technologies are not only executing iterative tasks, but also augmenting workforce capabilities significantly. In fact, automated machines are expected to replace almost half of the global workforce. Multiple industries, from manufacturing to banking, are adopting automation to drive productivity, safety, probability, and quality.

The session concluded with an open question and answer round where a lot of questions were put forward to Pranjal regarding the aspect of robots and automated technology taking over human beings and eventually ending up controlling us. In the interactive round, he explained to the audience about his perspective of human retaining their powerplay position, because he claimed that the element that makes us human would still remain irrespective of the technological advancements. One of his central arguments which caught a lot of attention was the need to adopt the automated section in the country replacing many everyday affairs as well as activities like manual scavenging which needs to be abolished as soon as possible, thus the listeners had a major impact on their perceptions towards the injection of automation in the country.