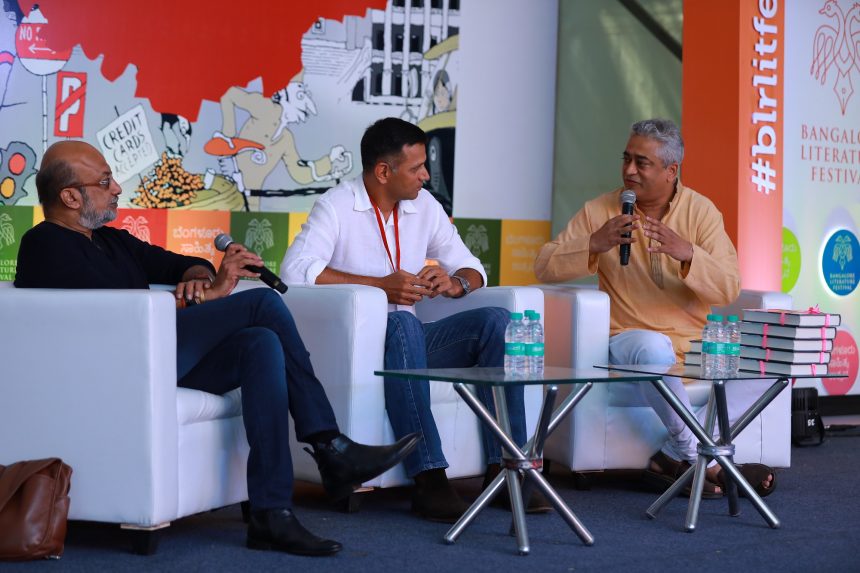 In the kickoff event of Bangalore Literature Festival on Day 2, Prem Panicker, Rahul Dravid, and Rajdeep Sardesai began the session amidst the massive crowd who welcomed them with huge applause that steadily reached a crescendo. Prem presented Rahul as the only example in the universe that is so calm and immovable yet an irresistible and unstoppable force, the Golden Boy of cricket and Rajdeep as the history of cable television 24/7 in the country. He is an author who has written on politics and now cricket.

Prem: Rajdeep’s new book on cricket is called Democracy XI and a majority of it is about the people he had picked as his 11. It is subjective and each one of us will have our own list. But Rajdeep hangs his book on two central premises. One is that cricket is a meritocracy and one of the few meritocracies that is left in India. I wanted to start with that.

Rajdeep: My father played for India, I didn’t. Because he had the talent and I didn’t. Ambani’s son can take over the family company, Abhishek Bachchan can become a movie star, Rahul Gandhi can aspire to be PM. But the fact is, I couldn’t. It’s important to recognize that. There are fewer and fewer activities in this country that are purely merit driven and cricket is one of them. And because of that approach, India is number one today. Anywhere in the country, if you have talent, the talent is likely to be spotted and likely to be given the kind of space that wasn’t there seventy years ago. That’s the point that I am trying to make. This isn’t about privilege or dynasty. This title reflects the democracy that we have in cricket.

Prem: Rahul, first half of your career, most of the national players came from the well-established centers and in second half, the influx of talent from IPL and players started coming from places that you never historically associate with. Do you identify a seminal sort of tipping point and what changes that brought from the team’s perspective?

Rahul: You’re right, in my earlier days, most of the players came from bigger cities and now in U-19 team, I see majority of the boys are from tier 2 cities. There are a couple of tipping points that have changed the landscape of Indian cricket for me. First, it’s the fund and facilities. It’s the game that needs facilities to develop the skills to be able to compete at the international level. There was complete lack of facilities for people outside bigger cities. If you had no access to them, somewhere along the line, you won’t be able to compete. If you’re coming to Bangalore and rent a room and start worrying about the next meal, you won’t be able to think big. But thanks to the money that came to the game because of IPL, there were resources in the smaller cities. Second, it’s the technology. Earlier we had set of coaches in big cities. Now so many of our experts are talking and the access to watch these games is easy. No one is stopped because of not having a quality coach in a small town.

Rajdeep: To add to that, in an earlier generation, they learned cricket from oral communication when they only had radio. That’s what I want the youngsters to know. In my book, I wanted to tell before Yadav, there was Prasanna; before Ashwin, there was Chandrasekhar; and before Dhoni, there was Kirmani. If you don’t know that, then you’re not a true fan of cricket. We need to celebrate the legacy of cricket.

Prem: Has the game changed at all, when there are people coming who weren’t brought up with a “nice boy” attitude?

Rahul: I think that it has a certain level of confidence. During one of my early tours, I told a senior that it would be great if we won all the matches and he replied that we would be lucky if we won one of them. Drawing matches were hailed as success then. Now we expect India to win. It doesn’t mean that the players of earlier generation were not aggressive or mentally tough. Right now, it is just that there is this in-the-face aggression and they are in your face all the time through television or twitter. It comes out a little bit more.

Rahul: People are lot more fearless these days. The fearlessness comes with a certain level of financial security. As a 21 year old with only a degree in commerce, I know that it wasn’t going to suffice and there was a certain pressure to make the cricket work to make my life easier. Today’s IPL brought in some sense of financial security and they do play a fearless brand of cricket.

Rajdeep: While there is fearlessness, there are also agents and sponsors for an 18 year old cricketer. It’s so much difficult to access them. I wonder whether they are caught in some sort of bubble and that troubles me. Other thing is that there is so much of lip being given on the ground. Is this the definition of aggression? Do they have to play the role of the macho rock star?

Rahul: It’s nature of the times that we live in. There is more sponsorship today. Earlier they did too and it’s just that there were not many of them and so not many agents too. Now there were sponsors who are willing to use the value and marketability of a player. But honestly I don’t think that the youngsters need an agent. Kohli or Dhoni – they need an agent to focus more on their game as they don’t want to chase the dates or the money he is owed. Only when you reach that particular level, you need an outside support to help you. For the question of redefining aggression, I think that it’s still about the performance of the game. Virat may be in your face but I think that is just his personality. That is what gets the best out of him. I was the way I was and that is what got the best out of me. People should be authentic to who they are.

Prem: All the players in your book – you have known them and interacted with them before. But what did you learn new about them?

Rajdeep: It’s their modesty. For example, Dhoni. In 2001, he was a ticket collector and 10 years later, he lifted the world cup. I asked him whether he dreamed of it. He answered, “Look, when I was a class 3 employee, all I wanted to become was a class 2 employee”. I thought, in the simplicity in which he put it, that’s where Dhoni’s success lies. The ability to make life much simpler than it is – that’s the key. When I asked Sachin how he handles the pressure, he told me that he thinks everyday as his first day. The joy of going out to bat was enough to keep him going. That’s the thing that I learnt from these greats – to simplify the game instead of complicating it.

Prem: Every little thing you said, Rahul, you noticed the reaction of the audience (referring to the audience cheer and claps). When are you going to write your story?

Rahul: It’s really hard to be honest without creating the controversies. When you write a book, it’s going to be all over the place and I don’t want to put my family through it.

Prem: Do you think that there is that much pressure?

Rahul: Don’t be critical about Virat and Dhoni, even Ashish Nehra can decide when he wants to retire. Most of the players come from a humble middle class family. They become heroes, thanks to you and the satellite television. You keep on asking for their interviews and write books about them. It’s the game that made them the hero. A lot of other people become rich by making them rich including TV channels.

Rajdeep: You didn’t answer my question. Should the captain get to choose the coach?

Rahul: That’s why he is a good journalist. I gave a long winding answer, thinking that he would forget what he was really asking. I don’t know the specifics of that issue and I am not privy to the information. It’s not fair for Anil, who has been an absolute legend to the game. Coaches get sacked and that’s the reality. It shouldn’t have played out in the way that it did publicly.

Rajdeep: Should players get to choose when they want to retire?

Rahul: People should never have to choose that. It’s the selector’s call. You have a captain and the coach who chips in and you have to believe that they made the right decision.

Even though we were all waiting eagerly to hear more from Rahul and Rajdeep, it was time for the book launch. Erapalli Prasanna, Syed Kirmani, BS Chandrasekhar, and Rahul Dravid together unveiled the book with the fans rushing to the front to get a closer look of the legends. As the crowd roared with whistles and claps, the most fantastic morning session came to an end as the four gentlemen who redefined cricket gave the stage back to the organizers.