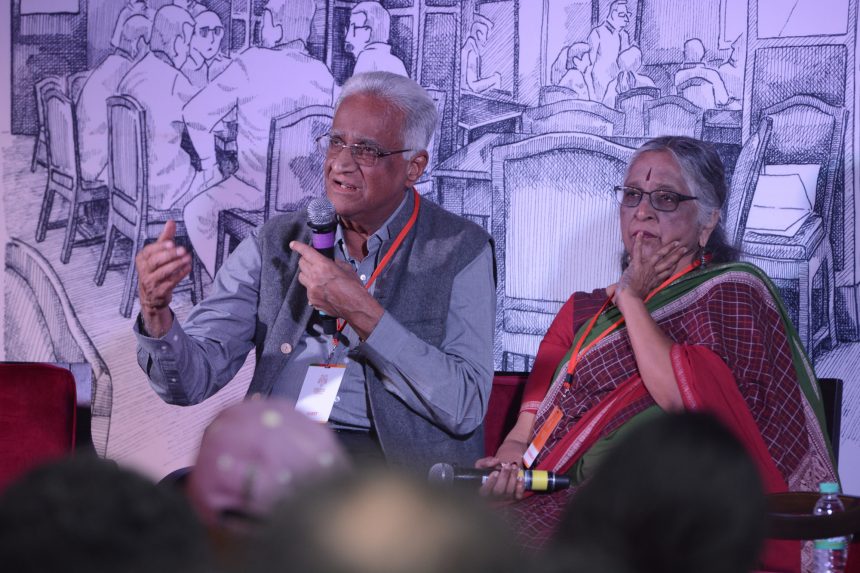 The Indian Space Research Organisation, or ISRO, is one the most widely respected and revered organizations in the country. It has no doubt placed India on the map of Space research, with the many successful PSLVs, and the hugely popular Chandrayaan and Mangalyaan.
Of course, as any success story goes, there are humble beginnings that lead up to all the fanfare.

ISRO’s rise has been traced in the book by Gita and R Aravamudan. Mr Aravamudan was a handpicked engineer by Dr Vikram Sarabhai to work with India’s Space Program. His wife, Gita Aravamudan is an established journalist who has co-authored the book with her husband. He chuckles, the book was written by the two of them, where Gita did most of the writing and the content came in from him.

The session saw them trace the journey of ISRO from its humble beginning with just about 6 of them, taking up training from NASA, and setting up in the ionosphere of Trivandrum with the initial motivation to have sounding rockets launched with a few payloads. To fuel this, set up a station in Thumba. A few years into it, the technological revolution around the world had opened up the door for new technology in the communication front, and that was where Dr Sarabhai drew the idea of satellite vehicle building from.

The humble beginnings of ISRO which began with rockets like that of “Diwali crackers” has now taken intellectual minds over the years to build a mammoth of an organization today. He calls this a fantastic example of a Government run technical organization. This is the essence of the book, he says. With modest budgets, and with the laws of the Government, the employees were still motivated to do something for the organization. Gita recounts the experiments that included balloons that were sent up in the air in the initial days.

ISRO is an example of a single visionary’s guide to the establishment of it, with the full support from the Government while it was still establishing itself, Aravamudan says. It also had a clear agenda and transparency with which it operates. Its failures and successes were out in the open for all to see; the failures which were much mocked at.

His work alongside the late president Dr A.P.J Abdul Kalam, he calls from his memory fondly, and their successes with the Satellite Launch Vehicles, the hardships in procuring technology, and overcoming all of it is also etched in his memory. He remembers how they egged each other on, and that Satish Dhawan’s encouraging words brought in the much-needed inspiration. Till today, of the 40, 39 of the SLVs have been successful, a record in the making! Today, the Mangalyaan and Chandrayaan have been hugely successful even in its first attempt, he adds in excitedly.

Gita asks his opinion on the many comments and questions that come in from the public on the importance of investing in space programs when India is still grappling with very many economic issues. He draws a parallel, if a movie could cost 4 times more than the entire Mangalyaan project, it definitely answers the question. Moreover, being technologically dependent on other countries for critical technology such as GPS is a risk to the defence of the country. An investment in these programs will not only make India self-sufficient and cost-efficient but plays a huge role in governing our safety as well.

The book is one that definitely acknowledges the never say die spirit of the ISRO, a stunning example of a Government run organization that works like a well-oiled machine, only making the country proud with each passing year.