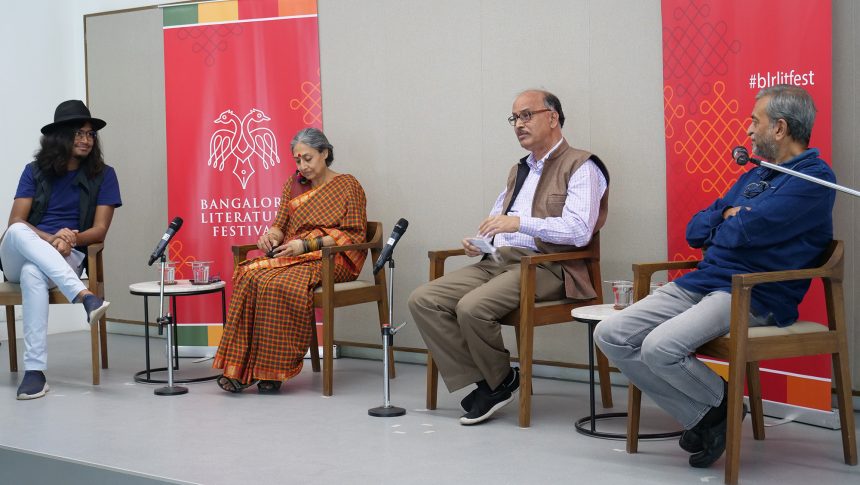 This session felt like a cinematic experience! When the veterans of cinema come together a very insightful discussion ensues. Samantak opened the session with the question if over time Indian cinema was trying to glorify an ideal life to help the masses get out of the drudgery of life? While doing this does it compromise on the realities?

Padmavati Rao, a renowned actor and writer, quoted her personal experience of what Nazir Husain, a famous actor during Indian independence days, said. He said that art cinema is very good to talk about, but people do not want to see their lives on screen. Thus, we need to create cinema that entertains them. Nazir’s films Jewel Thief, Carvaan etc. depicted what people wanted. She said that she feels it was a matter of choice then, but might be a compromise today.

Vidyashankar N, the founder member of Bengaluru International Film Festival, brought about a very interesting comparison between politics and cinema. He said that while for all other countries, cinema acted as a tool for political propagation, for India that was never the case. He spoke about how Gandhi was very against Indian cinema from the onset. This gives a picture of why Indian cinema was not used as a tool for political discourses.

He also added that the purpose of Indian cinema is not art but to serve as a tool of evolution of the capitalist mode of market economists. He thought that cinema is a cultural expression rather than an artistic expression. He brought about an important observation about villains before and after the 70s. Before the 70s, they were the smugglers, feudal lords, underworld dons, who also got unintentionally legitimized over the years. After the 70s, it changed to politicians, bureaucrats, and executives, where the idea is not evil, but the villains are.

MK Raghavendra, a writer on culture and international cinema, had such amazing knowledge and anecdotes to share about innumerable movies of all times. His view was that Indian cinema cannot avoid politics. The common factor that binds the public is politics. The messaging might not be explicit, but it has ingrained general political messaging. He quoted an example of 1948 movie Anokhi Ada and compared the plot and characters to the then political scene, with Pandit Nehru, Sardar Patel and Gandhi. Another example of the movie Anmol Ghadi by Mehboob khan and explained the underlying message.

He said that always dominant politics is followed in all cinemas. He took examples of Duniya Na Mane and Queen movies, to bring his point on how women are celebrated for performing their celebrated role in society. He also quoted examples of movies like Deewar and Johny Mera Naam that depicted Indira Gandhi’s anti-western agenda.

Samantak now moved the discussion to the next key topic related to gender issues. He asked in women-centric films is it the perpetuation of stereotypes or is it the reality?

Vidyashankar’s view on this was that one must look at the common denominator to sell for the audience. Cultural expressions, including music, dialogues, relationships are used because they are received very well by audiences. Basic instincts like sexuality, violence etc., the dominant ideologies, sell more. By doing this, the moviemakers get the cinematic dividends they are looking for.

Padmavati’s take was that women have been portrayed as victims because that was reality. She quoted an example of the movie English Vinglish where the protagonist is patronized to do housework. She also confessed that movies like Thappad are bringing a change in this direction in small measures. But the challenge still is that a liberated feminine audience too will be tempted to take side with men. It is so ingrained in our DNA, that we don’t allow ourselves to think otherwise. She said that she feels that women are contributing in a constructive way, saying we all need to coexist. She continued with her view that over years access to art has become less. It has become spectatorship now, while earlier it was participative.

She strongly brought out the point that cinema has been a culture keeper and has kept alive folk.

Raghavendra said that Indian cinema is constructed like a fable and thus every film has a message, and every character has to have only one meaning. The victim is also one of the parts and is essentialized.  He said that if someone is perceived as a victim, then one cannot bear to see them rise. Based on the essence of being, the rich are always rich and the romantic are always romantic.

Vidyashankar shared his challenges on taking Indian cinema to International Festivals. He spoke about the notions that are internationally carried about Indian cinema which makes it difficult to take many good ones to that level until it is truly representational of universal cinema.

He also spoke about an important aspect of social and natural orders in context with gender issues depicted in films. He said that natural order is the dominant aspect, to do with people’s attitude, which is unfortunately not changing. This makes it difficult to make a film where natural order is questioned.

Overall a very informative and insightful discussion on various aspects of cinema, politics and gender issues.