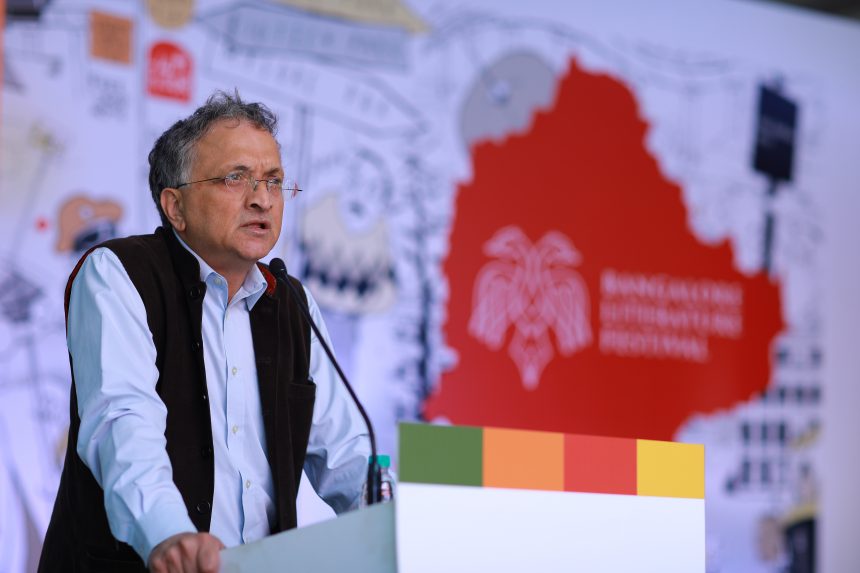 Weekend mornings of an octoberish Bangalore can carry you into an inertia that is extremely difficult to overcome. However, this is a time loved and awaited by writers, poets, and patrons of literature for reasons transcending into the creative streak of such people. As such, this is perhaps the best time for a celebration like Bangalore Literature Festival to happen. When you have a Historian and Author as eminent as Ramachandra Guha to speak with you right in the morning, you can’t really ask for more. ‘Jingoism Vs. Patriotism’ has been a lingering debate for a long time in our society and has gained refreshed vitality in the recent times. Guha spoke on this subject.

After explaining the European model of nationalism that demands the prominence of one language, one religion, and one enemy, Guha suggested that Pakistan was a perfect example of a product of European nationalism citing the religious basis of partition and the imposition of the Urdu language on East Pakistan. Invoking the leaders of Indian freedom struggle, Guha said that our leaders refused to identify India with one religion or one language. Indians had the freedom to practise their own linguistic individualities. A counter intuitive feature of Gandhian nationalism was that we were not made to hate even the British. The resistance was to the British imperialism and not the British people themselves. That Gandhi’s closest friend Charles Andrews was an Englishman, is itself the biggest testimony to that fact.

Guha transitioned to the 1920-21 Non-Cooperation movement of Gandhi and spoke about the 4 ‘sturdy bed posts’ of Swaraj – Non-Violence, Hindu-Muslim unity, Abolition of caste and gender based discrimination, and economic self reliance. Guha stressed upon the place of values in Indian nationalism vis-a-vis European nationalism. Guha calls it Constitutional Patriotism and he enunciated the aspects which make this form of patriotism aspirational. That no particular type of Indian is superior to another type irrespective of race, religion, caste, language, and other differences forms the most fundamental aspect of this kind of patriotism. Guha said, “…one must remember that patriotism operates at different levels. As charity begins from home, so does patriotism begin from your home, neighbourhood, city, state and so on.”

A constitutional patriot must also be able to feel shame at the failures of his state and have a desire to correct them. Most of the leaders of freedom struggle including Gandhi acknowledged this and worked towards a course correction. Guha further quoted Tagore and Gandhi to drive the true meaning of patriotism and nationalism. At this point, he also defined a jingoist to be someone bragging of his own country’s preparedness to fight whereas a patriot  loves his country and countrymen, is ready to fight for freedom and rights, and defend his country from enemies. Quoting Golwalkar from his book Bunch of Thoughts, Guha spoke about how Golwalkar thought that the 3 chief internal threats of our country were muslims, christians, and congress. This was comparable to the middle eastern world of 11th-16th centuries where jews and christians lived as ‘protected citizens’ and kafirs like Hindus had to be killed.

Guha explained the reasons of the ascension of jingoism and held the hypocrisy and ‘absence of patriotism towards their own country’ of the left as one of its chief agents. The corruption of the congress party and events around world including the rise of Islamic fundamentalism also have their own share. According to Guha, while the situation might look grim, the constitutional patriots must keep fighting and stand up against jingoism.

About the Author – Abhishek Kumar Jha is the Founder Editor and Writer at Bookstalkist.