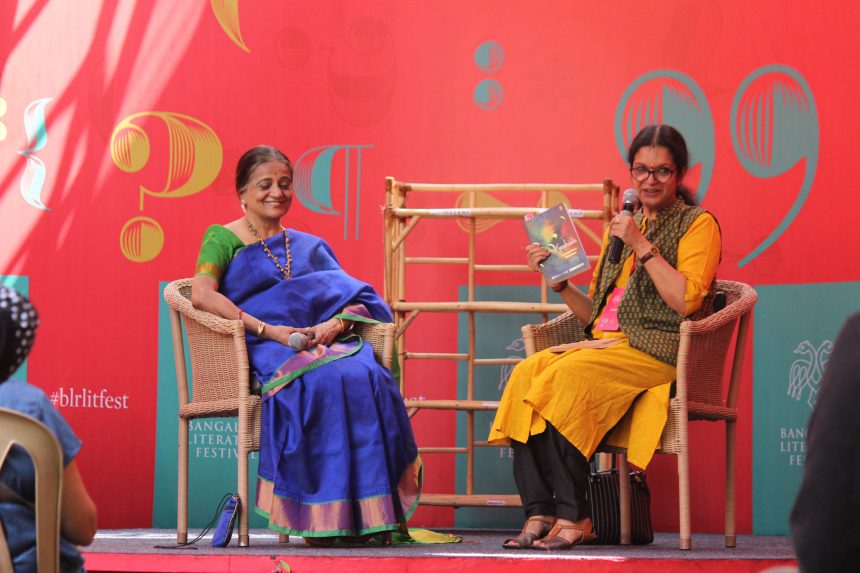 Bhavana Somaaya has been writing for cinema for more than forty years. She has not only worked as a film critic but published several books, worked on radio, and has no limit to her explorations. In her sixties now, she has started learning Bharatanatyam since past two years. “Keshava”, is her book on lord Krishna and his relationship with several elements of nature. Bhavana has written yet another book on lord Krishna and she finds him to be her inspiration to seek serenity and joy in life. “Anyone who comes in contact with Krishna is consumed by him,” said Bhavana. She said that Krishna is an alluring deity and adores the overall charisma he has.

Bhavana said that lord Krishna has the power to make everyone feel special; when a person comes in a relationship with him, one feels that lord gives all His attention and makes one feel important. Further in the session, she narrated how Keshava was not the original idea of a book or rather not just one single book, in fact it is a compilation of several small sections. She initially wrote “Tulsi”, her book which she struggled to publish as it was short of the required word limit. After a few years, she added the aspect as to how Tulsi is related to lord Krishna. While working on the book it thrilled her and she transformed it into an elaborated idea which dealt with Krishna’s relation with the natural elements of the world. That is how the book ‘Keshava’ came into existence with Tulsi as a part of it.

Bhavana spoke about how she considers evolution and absorption to be the mantra of her life. This, to her, is Krishna’s most prominent characteristics. Applying the same, she revealed that she got the inspiration to write the book from a Gujarati text on Krishna that she had wished to translate. But she faced many difficulties because she did not know the script. She learned several languages to complete her research and her book.

She told the audience that she has used very lucid language in this book which is different from all the other books that she has written so far. Despite the construction of this book being quite mechanical, yet it does not bind the reader to go by a chronological order. Each chapter serves as a different segment and establishes individual relation of the elements with Krishna. She calls it a book of devotion, belief, and prayer.

About the Author: Aditi Dua is a Masters student in English with Communication Studies who has a knack for aesthetics and poetry. Apart from being a literature enthusiast, she highly celebrates challenging ideologies and provide disputing ideas of death. Always available for a conversation over good coffee. She currently writes for TheSeer