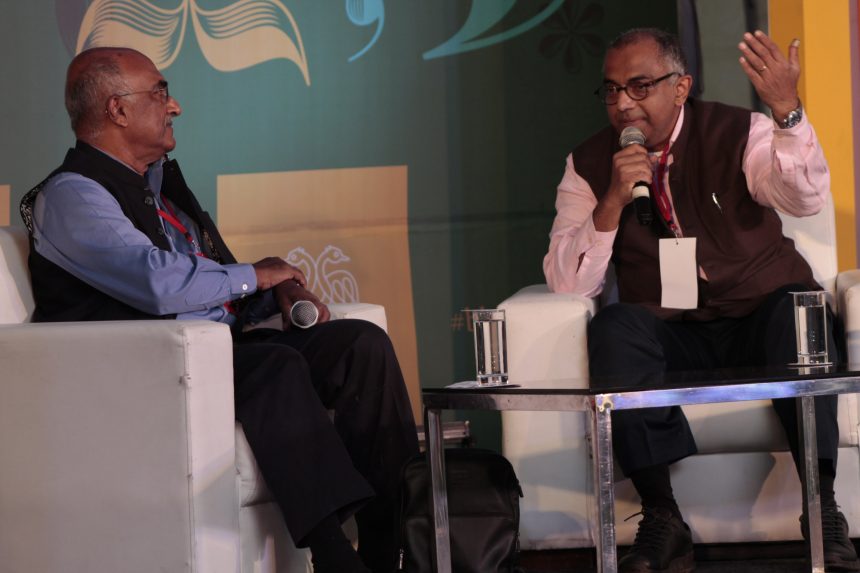 “Don’t step on people who are having sex”. The session, which had Ashok Alexander in conversation with Vijayendra Rao, started with the former quoting this line from his book ‘A Stranger Truth. This was in answer to the moderator, Vijayendra Rao’s question about the former’s experience visiting sex workers. This session was an interesting exchange between lead economist of the world bank, Vijayendra and the former Mckinsey member, Ashok Alexander.

Ashok started with a heart touching video clip portraying the work of his NGO, “Antara Foundation”. He related how this journey was set in motion because of his love of adventure. He also said how in this journey he had to unlearn Mckinsey’s way of providing solutions and seek answers from the marginalized community himself.

The former businessman was inspired by the power of people at the bottom of the pyramid, especially women, who could solve the most complex problems society faces. Vijayendra gave an insight to Avahan, an initiative funded by the Gates Foundation that aimed to stop HIV in its tracks in the early 2000s. Ashok credited the stigmatized community of sex workers for the victory of Avahan, a revolution led by women across 600 towns of India.

Ashok put out the ultimate message of his book through the words of Dr.Sushena,

“It was very simple. Trust and compassion spread like wildfire. They scale up very easily”

He further explained the role of compassion in his life through a meditative process he practiced. It involved closing eyes and visualizing closed ones when we witness someone beaten down by society. Ashok felt this fills him with empathy and compassion.

He shed light into the state of sex workers in India, stating that 6-7% of sex workers are found in brothels and the rest of them work on streets. He expressed the difficulty of finding these women and helping them.

Another crucial topic that his book dealt with was the practice of unsafe sex, which he found was the root cause of violence towards sex workers. As he said, every sexual transaction was almost always an incidence of violence which is correlated to STI prevalence. He gave an example of a woman who asked her client to put on a condom and was brutally abused as a result of that.

To conclude, the session was informative and educative.

Ayesha is a student pursuing Media Studies, Psychology, and English. She is an appreciator of new things, places and people. She believes good food and a trip to a beach can heal the soul. Her personal blog covers themes such as mental health and travelling. She currently writes for TheSeer. Instagram handle – gudiyaaa_