Lest We Forget – Descendants of Indenture 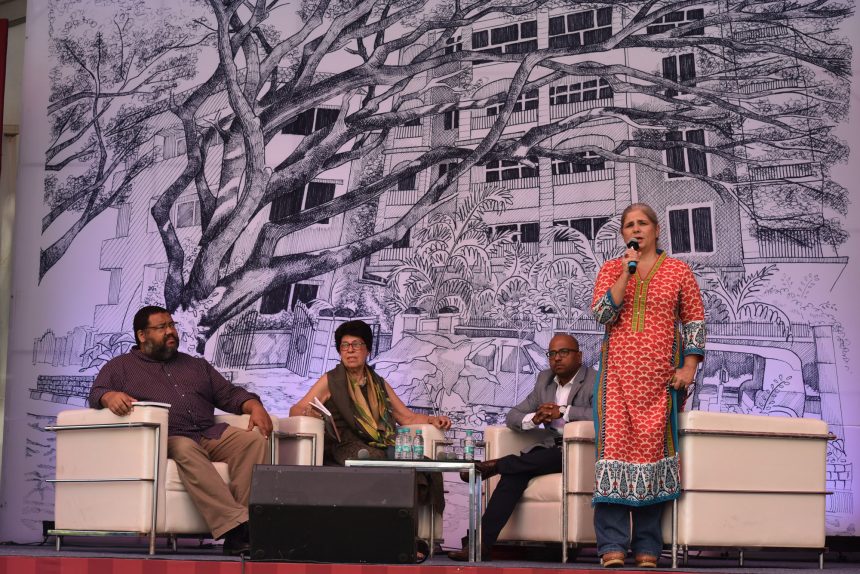 The session ‘Lest we Forget – Descendants of Indenture’ speaks of the stories and the journey of indentured labours and their descendants. The session observed the presence of Award-winning South African poet, Athol Williams, Simit Bhagat, and Deirdre Jonklaas Cadiramen with Janet Steel.

The session started off with Janet Steel giving an introduction about indenture to her audience. The concept of indenture was introduced soon after the abolition of slavery as it lead to the need for cheap labour. Indenture explains how individuals agreed to, or rather were forced into agreeing to work in a colony for a fixed period at fixed wages. Janet further explained that about 2-3 million people were shipped from ports like Calcutta and Madras to work in plantations located in Mauritius, Trinidad and Guyana, later followed up by South Africa and Fiji.

Individuals were indentured for a minimum span of 5 years after which, according to the contract, they were free to go home. However, at the end of these 5 years, the indentured labours found themselves at a lack of money to return home and hence got into another contract for 5 years at the end of which the employer would have to make arrangements to send them home or buy them land. These labours had to endure long hours of difficult work for very little pay through the period of the contract. The anthology ‘We Mark Your Memory – From the descendants of indenture’ which includes the works of Athol Williams and Deirdre Jonklaas Cadiramen aligns with the centenary of the abolition of the system of Indenture. And today, descendants of indentured labours are scattered across Commonwealth countries which include Belize, Srilanka, Kenya, Malaysia and the Seychelles.

Simit Bhagat presented a 10-minute excerpt from his documentary about indenture labours to the audience which portrayed a heartfelt expression of all the pain and suffering that the indentured labours have experienced through the medium of Bhojpuri folk music. The documentary is filled with stories of separation and migration which have happened through the British Raj.

Deirdre then read an excerpt from her story ‘Heist’ which was one among the 28 stories in the anthology ‘We Mark Your Memory’. The story presents the direct experiences of Dierdre and the journey she has had as the daughter of an estate superintendent in Srilanka. Janet remarked the uniqueness of her story when she explained to her audience that this was the only story in the anthology, which comes from the planter’s point of view.

Athol then introduced himself as the 4th or 5th generation descendant of the indentured labours. He explained the history of indenture in South Africa and also pointed out how people might be wondering that his surname (Williams) doesn’t sound Indian. He continued to explain how indenture often resulted in the erasing of history and memories. He said that the actual surname his ancestors held was ‘Balakrishnan’ which during the indenture was heard and noted by the officials as ‘Balachistan’ which remained that way for some time. His grandfather later migrated and changed the surname to Williams. History, language and religion often become collateral damage when it comes to an indenture. While sometimes simply forgotten, most of the times, it results from the shame associated with identifying as a descendant of indentured labour. Athol says that while that is the norm, he chooses to take pride in his history and identity as he reads his poem ‘Erased’ from the anthology which depicts the fictional account of a child asking his father of their history.

Discussion continued as Janice posed the question of why the concept of indentured labour was not as well known. Answers ranged from the descendant’s associated sense of shame to being overpowered by the focus over the independence movement. All 3 panelists explained how both the hope and despair experienced by the indentured labours and their descendants has seeped into and found its place in the arts to educate the audience through the mediums of Bhojpuri folk music, writing and film.

About the author: Bhargavi Komanduri is a final year student at BITS Pilani, Hyderabad. She has profound admiration for writing, reading, theatre, dance, movies, chocolates and chai. Being a seeker of good art in all shapes, and forms; Bhargavi also strives to be on the creators’ side of creation. Her journey has just begun as she unleashes her poems and thoughts every week. Find her foray into this new found creative spirit, on Medium, here – https://medium.com/@bhargavi2497. She currently writes for Bookstalkist.