Life, the Universe and Everything: The Influence of SF on Society - BLF 2018 Reports - Bangalore Literature Festival (BLF)

Life, the Universe and Everything: The Influence of SF on Society 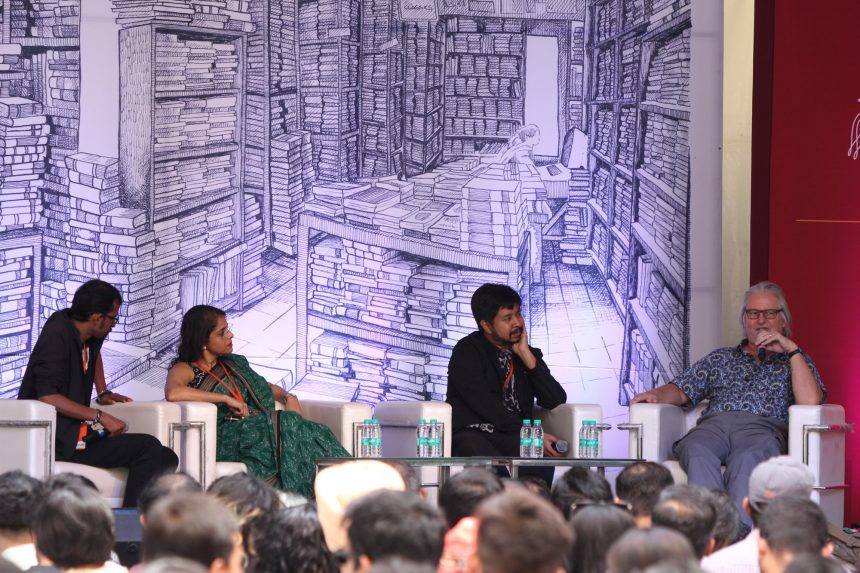 Science fiction has been one that catapults the reader into a world of possibilities. Be it time travel, or the world of superheroes, there is always something for everyone. What we miss is, however, the impact it has on society. Is it a reflection of what is going on in the society, or is it the other way round? Gautam Shenoy, along with established Science Fiction (Sci-Fi or SF) writers Bruce Sterling, Krishna Udayasankar, and Samit Basu, examines the multiple facets of how Sci-Fi brings a part of it into the working of the society.

How each of the writers looks at writing Sci-Fi is different. Sterling uses the example of the classic Jules Verne and how his free-spirited writing became rigid and boring when he became a politician. Consciously writing to reflect the society may not necessarily bring about the changes that are desired, as much as the free-flowing ones do, he says. Krishna Udayasankar who writes with an inspiration from Indian Mythology, says that mythology is used as a lens through which socio-political impact is seen, along with looking at how it can change. Samit, on the other hand, uses time travel as one that helps him keep a safe distance from the controversies of today.

That brings us to the question of social engineering. Could science fiction also help in social engineering? Could it actually bring about changes in society? In regard to this, Shenoy recounts an incident from the past when a college Vice Chancellor accused an SF writer of slacking off, and not coming up with more otherworldly writings, and that lead to Project Hieroglyphic. Sterling accedes to the fact that SF writers are often expected to bring exaggerated ideas in a world where dystopian SF literature is assuming popularity. He also speaks about how he doesn’t want SF to lie, but be one which can use its brainpower to bring solutions.

As much as we speak of the society and it being influenced by SF, do works imbibe and reflect the fears and anxiety of the society, Shenoy ponders and provides examples of movements such the one on the Handmaid’s Tale. Samit denies; in a country such as India, it is very hard to internalize something on those lines given the existence of many realities, and the uniqueness of each of them. He mocks when half of what we read like the news itself is fictional, how would a fictional piece assume such impact? However, Krishna says that the power of the familiar is one that is largely important. It is enough to entertain the thought of an alternate possibility.

When speaking of sci-fi, can it also help teach science? When Shenoy quotes examples of many scientists writing sci-fi pieces, Sterling opines that the trend is not really a healthy one. It is an oxymoron to have scientists who propagate truths to go ahead and write fiction. Good science fiction comes from anthropologists who can indeed understand the culture of a society and therefore can write pieces that take back messages into the society its stems from.

Shenoy moves on to examine the superhero culture as well. A rather interesting set up of Superman fighting the Nazis or a Black Panther fighting the Ku Klux Klan, Shenoy indulges in a conversation with the writers to understand how they work in the backdrop of the society. Superheroes today are modern myths and the ideal immigrants. Their presence is rather live, and keep the story alive, they say. However, Basu jokes, a superhero in India is considered one only when he fights in the west!

This genre, however far and distant it may seem, is integral to the society, as society is to it. Science fiction writers have risen to a level where they have become advisors and their words have become ones that have considerable weightage.