Made in India – Milind Soman and Roopa Pai with Mariam Begg 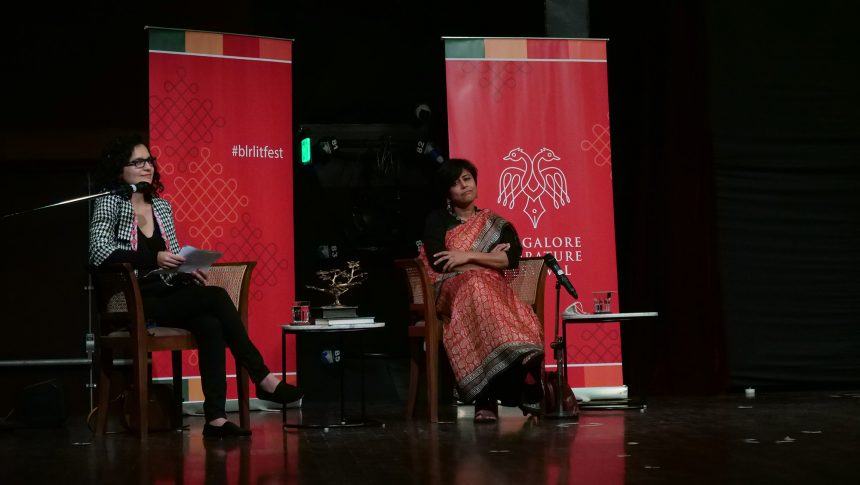 “To me, writing the book was an experience, the articulation was a reaffirmation of my decisions in life” – thus said Milind, at the start of a very interesting conversation with Roopa Pai and Mariam Begg on his memoir, ‘Made in India’, written by Roopa.

Miriam asked Milind how he manages to obsess to excel yet not let his obsession take over.

Milind said he is an explorer and an obsessive personality with an eye for detail. These help him involve as well as detach; he protects his peace of mind at all costs.

How did you decide Roopa will write your memoir?

Milind narrated that Penguin had been following up with him on his memoirs. He came across Roopa’s short stories on Facebook during the Commonwealth Games. He was impressed and decided to go with her.

Roopa admitted that she initially had misgivings, however, she took it as a challenge since she loves exploring diverse topics.

Roopa said she expected to be overwhelmed and was not prepared to take on ‘celebrity drama’. However, she was in for a pleasant surprise; Milind was aware of his celebrity status, yet not burdened by it. Roopa narrated how they would meet in coffee shops where many would want to take selfies with Milind. He would patiently oblige, though only after the person did ten pushups!

She also mentioned that Milind would be unpunctual, but once he came, he gave unadulterated and time as promised.

Milind added that he is not much on social media, limits his time to an hour a day, focuses on one thing at a time. Milind revealed how competitive sport from a young age helped in being focused.

He added that Roopa is an interesting conversationalist and they got along very well.

Mariam was curious to know how Milind imagined Roopa versus her reality.

Milind responded that he had the most interesting conversations with Roopa, which took him into the past and was a wonderful exercise. He quipped that Roopa should look at a career in counselling.

How was Milind’s response to the book?

Roopa remarked that Milind read only a short extract on WhatsApp, did not read the book for a long time. Milind responded by saying that his family’s reaction is more important; they loved it, they are a finicky family.

Roopa let out a fan-moment when she said that Milind is a pan-generational celebrity; her daughter thinks he is good looking, and her grandmother likes him!

The Book Launch and Milind’s Promise

Roopa had a tinge of regret that they could have only one book launch due to COVID-19. Yet she was thrilled that Milind fulfilled his promise of having another launch at her home exclusively for her friends. She spoke of how he converted it into a fundraiser; they were able to raise one lakh, Milind matched it and the amount was given to charity.

The conversation shifted to movies and Mariam quizzed Milind on what he got out of movies.

Milind admitted that he never had a plan to get into either modeling or movies. He studied engineering and hated it, got into modeling when somebody gave him an offer.

He went on to say that he did not aspire for too much fame, since it would restrict him from being able to lead the life he wants. He expressed thankfulness on having a balance.

What is the reason why the Standard Chartered marathon runs throughout the book?

Roopa remarked that she discussed with Milind and found that the Standard Chartered marathon had been a greater challenge for him whereas he found the Iron Man challenge easy.

Then came a question on fitness, a topic close to Milind’s heart. His mother’s fitness is amazing at the age of 81. Milind replied that it is important to be fit for life and have a positive impact on everyone around you, rather than doing just a physical activity. He explained how his mother started trekking at the age of 60, went to Kilimanjaro. His message was to take it one step at a time.

Was there any other choice of title for the book? No, replied Roopa and Milind in unison. Roopa thanked her friend, Vidya Mani, for suggesting the title.

Roopa’s learnings from this journey?

Roopa reflected on how she discovered herself since she found Milind echoing her thoughts many a time.

How did Roopa choose and pick what to leave out from the memoir?

Roopa remarked she was a memoir writer and thus did not have the responsibility of talking to various people associated with Milind; she just had to pen down what he chose to share. She said he had a bad memory which made her job easier! Milind did take care to leave out what could impact other people.

The last question was – if you go back in time, how would you write the novel differently? Milind quipped that the next book would be ‘Secret life of Milind Soman’. Roopa mentioned that she would complete the book faster.

On this note, Mariam thanked Milind and Roopa for the inspiration and bringing out a wonderful book. The takeaway was: listen to your inner voice, celebrate your identity.

This last session of the Bangalore Literature Festival at the auditorium ended with a message to take care, stay safe…until next year!