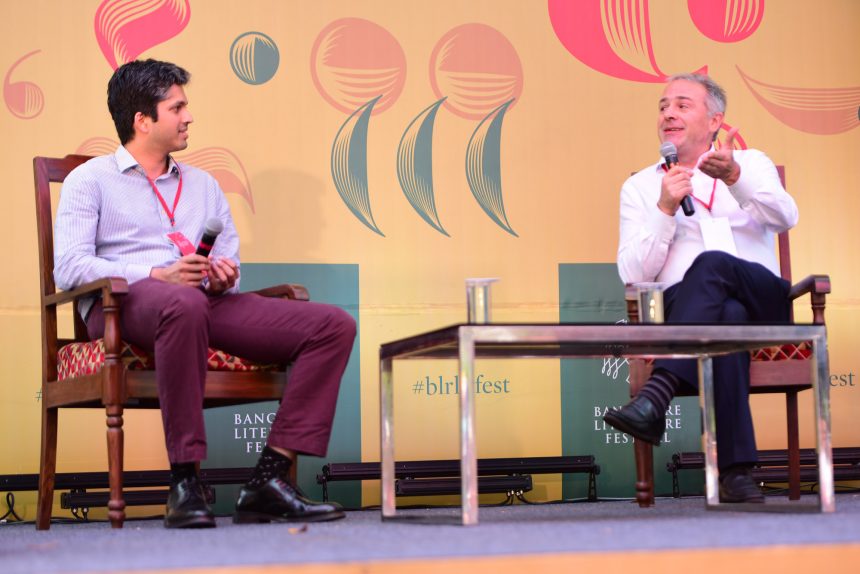 An uninhibited conversation of Edward Luce, an English Journalist and Financial Times chief US Commentator & Columnist with Writer and Editor Keshava Guha.

A conversation about Trump today is so on trend that you do not need to build up, you can get straight to the point and everyone follows, and that is exactly how Mr. Guha led the discussion this morning. Kicking off the session he quite pointedly asked, what is the significance of Trump and his actions today and will any of this be significant 30 years from now, or are we all just stressed about something that may not have a greater impact.

Mr. Luce jumped straight into it. He said without any reservation that what the American citizen is going through is TDS-Trump Derangement Syndrome. He was of the opinion that Trump believes that there is no such thing as bad publicity and plays on it and the average citizen is being played. He was quick to add, “Trump has not really done anything yet of the size of the disaster of the Iraq War, but is capable of something bigger and that is what he believes should be the cause of worry.” He assertively declared that Trump is a symptom of a greater underlying problem in America, not the disease everyone is trying to cure. He went on to add that the common citizen is feeding into the idea of pluto-populism and that Trump is basically a plutocrat.

Mr. Guha next delved into the comparisons and contrasts that can be drawn between Prime Minister Modi and Trump. Mr. Luce replied that Trump is not a threat to the US liberal democracy, Modi on the other hand with his core ideologies, might be. More importantly he says, “Trump is the least popular leader in the world right now, he is seen with an eye of disapproval and has a serious chance of being impeached in a few days. The Indian Prime Minister however enjoys huge approval at home and all over the world. He reflects on how this difference of perspectives speaks about how the people of the world see these personalities and their world vision. Where this contrast could lead us remains to be seen.”

They spoke about the upcoming US elections and how it will be less of a Democrat vs Republican fight and more of a war of populists, the left-populist or right. Mr. Luce was of the opinion that the Democrats have always needed a leader that they love and in that context, Joe Biden may be ahead of the race. He went on to comment on Biden’s election campaign being based majorly on an anti-Trump pitch. He said that Biden is trying to drive home the point that if they can get rid of Trump, America’s problem is solved. He believed that it may not be true and went on to say that this may not be the narrative people need right now. it also overlooks key issues that exist in the country. He then added that Elizabeth Warren with her liberal ideas was more of what America needed but not what they wanted. He reiterated that the symptom that Trump embodies needed to be dealt with.

Bringing the discussion to an end, Mr.Guha finally asked, “…how will the US accept the election result whichever way it goes?.” Mr. Luce remarked that in either case people will be left polarized and we are looking at a time when the western world is already as polarized as it can be. He concluded by saying – “What it will take is a Modi like personality to win the US election. It is interesting times we live in”.