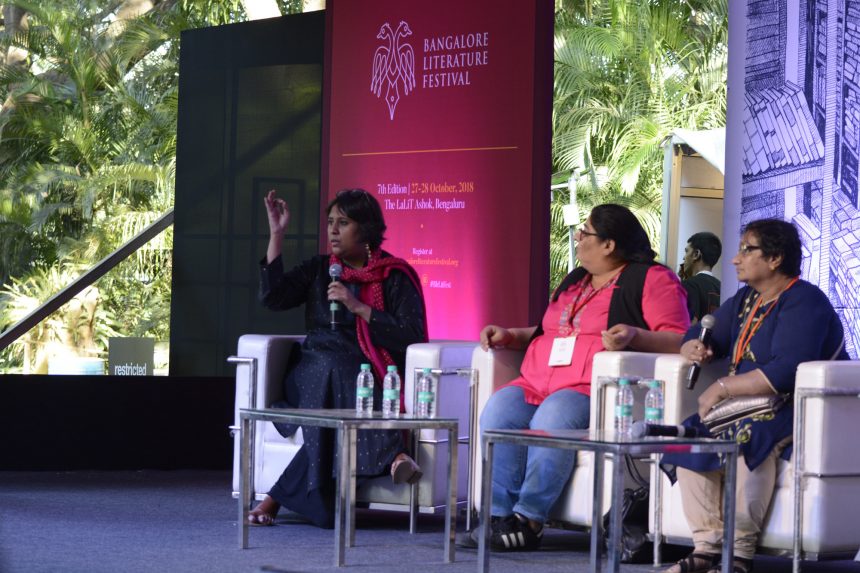 The wave of #MeToo swept the coast of Hollywood and toppled many of those in power. Moguls like Harvey Weinstein, beloved entertainers like Bill Cosby were brought to their knees. It heralded in a new age, that unveiled the pretence, went behind the shadows and gave voices. Finally, the movement has come to India.

Literature, since time immemorial has kept with the times, responded to the times and even went far beyond when it was necessary. So, how can the 7th edition of literature festival not salute the ushers of #MeToo wave in India- Sandhya Menon, Sister Jesme, Tushita Patel and Vinta Nanda. Their voices were once again unleashed, this time by Barkha Dutt, to the aspiring authors, bards and visionaries present in the audience.

What these women had in common, apart from the violations they endured, was the wavering courage with which they continued to work, live and laugh despite. The men they exposed, be it the sanskari, the veiled wolf or the one at the helm of the state, have no chance to affect their life now. Their recounts explored how the trauma of suffering in silence had stifled their lives and lent power to the perpetrators. However, when they decided to speak out, the power shift and the relief they experienced was immense. Hearing it from them, made it sound all the more real. Their words hanging out there in the open, waiting to be digested by the audience. There was a general atmosphere of anxiousness and exaltation.

In the coming days of #MeToo wave, many of more will come out, some voice will fail to echo, some will find its liberty and many more will fade. However, the sense of liberty, release that speaking out offers is worth all the horrors. That’s what the panelists of the session drove through the session.