Modern Perspectives on the Mahabharata – Krishna Udayasankar and Madhavi Mahadevan 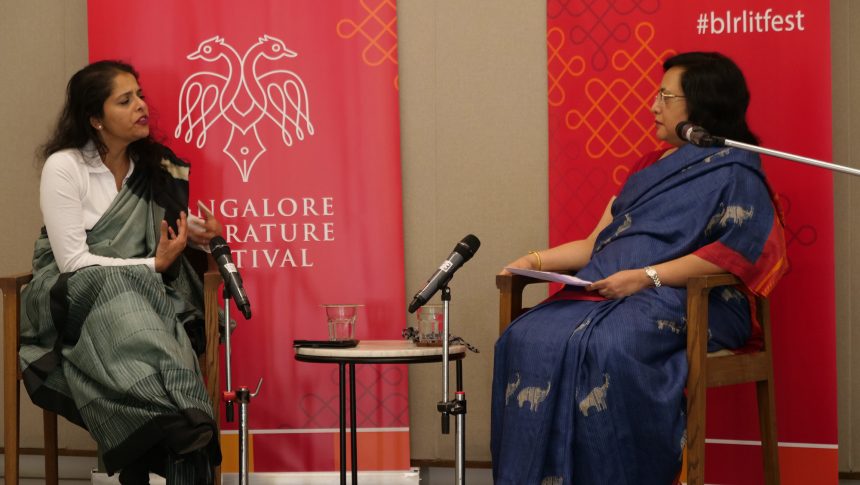 Mahabharata, the Indian epic, has us all intrigued for ages with various questions about life, karma, dharma, and bhakti. The writers on the stage here, Krishna Udayasankar and Madhavi Mahadevan were so intrigued that they have written books about certain characters on their journey to unleash the answers about the Mahabharata.

On the first day of the Bangalore Literature Festival 2020, we have two writers on the stage, Krishna, a renowned author of the ‘Chronicles of Aryavarta,’ and several other books; and Madhavi, a book critic and writer of children’s stories and short stories. She has written two books based on the characters of the Mahabharata. These ladies talk about their take on Modern Perspectives on the Mahabharata, that is, how is the 2000 year old epic relevant now?

To this, Krishna answers that people don’t change throughout ages. She further explains that the socio-technical perspectives change, times change, resources change, but people remain the same. Like the canvas of the painting changes, colours change, but the characters stay the same. To which Madhavi agrees. Madhavi further adds that because Mahabharata is so honest and presented the way it is, it is widely accepted. It is not like the characters are entirely right or entirely devil. There are greyed characters too, neither black nor white. Madhavi feels that Mahabharata is an aid to questions like, Who am I? What is my purpose? And what is the right thing to do?

Krishna now asks Madhavi what drew her towards writing on the mythical tales around Mahabharata? Madhavi graciously answers that she came across women characters that stood their ground in a man’s world who did not give up on their self-worth and fought for what is right. These women characters, often called ‘Pancha Kanya’, inspired her and drew her towards writing about Mahabharata. The five women referred to as Pancha Kanya are Kunti, Draupadi, Ahalya, Tara, and Mandodari.

Krishna now answers why she was driven towards writing Mahabharata. She says that she first attempted poetry in her starting days of writing, and it turned out that she was terrible at it. Later, she tried to write a satire on the Mahabharata and stumbled on the character Govinda (Krishna/Vasudev). She says that the personality of Govinda wasn’t easy to decipher and write about. This is where she pushed her boundaries, explored more, and wrote the chronicles on Govinda.

Madhavi asks how it was to explore a male character and write about a divine persona. Krishna elaborates that in her books, Govinda is no divine and is a normal human being. The books are a narrative of how an average person turns out to be so extraordinary. And that gender hadn’t got anything to do with her style of writing.

Madhavi presents her take on it as it was somewhat challenging to write about women characters because it was an age of patriarchy. She was overwhelmed with the Pancha Kanya that they had so much endurance and perseverance towards achieving what they believed in.

They concluded their discussion that the Pancha Kanya and the men of Mahabharat are relevant even today. Not just the characters but the acts of violence against women, injustice, and many other things are relevant today. Amongst this, it is paramount to draw one lesson: to look at the larger picture always, just like Govinda looked at the revolution of justice that they were creating even at the cost of blood spillage.