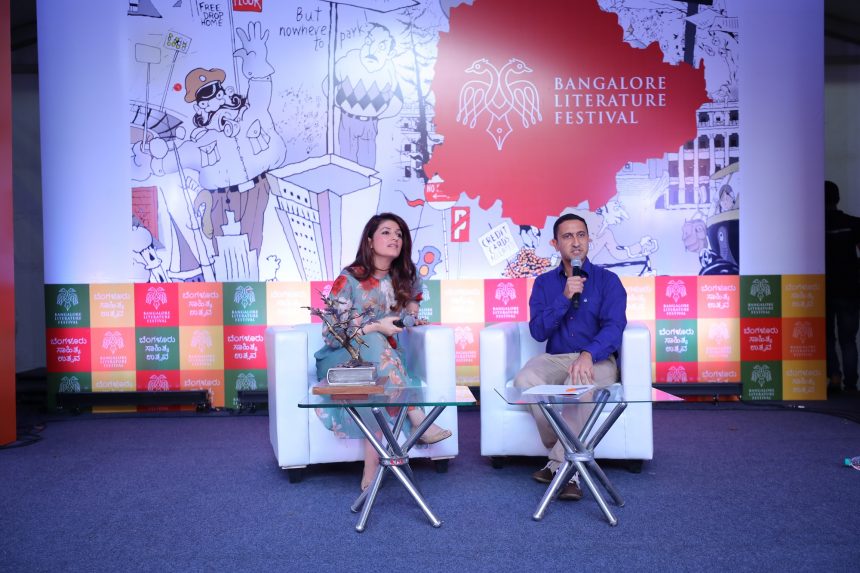 “Twinkle Twinkle little star
I am going to hit you with a car.”

Yes, Twinkle Khanna did say that, very eloquently in fact. To an unfortunate man in the audience who drew her ire by cracking jokes on her name, she responded in her funny fashion (no pun intended). Welcome to the session reigned by Mrs. Funnybones. The one takeaway from this session was that Twinkle Khanna is funny not only in her name, Funnybones (not Twinkle, please note) but also in her persona. Oh, I almost forgot to mention that she also agreed to endorse an audience’s book on Motherhood. We hope you haven’t forgotten it, Twinkle Khanna, because we haven’t.

Twinkle Khanna’s Legend of Lakshmi Prasad won the popular choice award for the best book that was given by Atta Galatta. Her acceptance speech highlighted how this award might go a long way in allaying the guilt that every mother has when they devote even a nanosecond to any pursuit other than family. Her guilt and her wish for multiple hands were actually one that helped to see her as a woman like any of us. It also led me to think that maybe the reason why some Indian Goddess have multiple hands is that like Twinkle they might have needed it to sauté the chicken with one hand, feed the children with one hand, and pour the gin to their husband by another.

During the session, Darius Sunawala was ever ready with his wittiest questions to draw out her humorous self. I particularly liked her honesty when she said the primary reason she will always treasure this award given by Atta Galatta is that she got it after beating 5 other popular male authors. She also later clarified that she would love to be known primarily as an author, not just as a ‘female’ author. This shows how the issue of the label is something that even an empowered women like her struggle to shed every day.

Her anecdotes about her family were well appreciated by the audience. She narrated how she used to write poetry on madness when she was a child, which her mother has blissfully forgotten now and romanticizes it by saying that Twinkle used to write poetry on mangoes, not madness. In another instance in her speech, Twinkle narrated what happened when she scored 97 in mathematics. Her mother responded to it by saying that her marks now match her weight. All these anecdotes did seem funny at first, but when I reflect on them, they seem a little sad. However, her other lines like ‘equality was a right with which she grew up and not a privilege’, sheds another light on her. She herself admitted that it was only when she was 35 that it dawned on her that not all women see equality as a right.

Her views on BJP regime is not something that we are unaware of. When asked about where she gets her sense of humour, Twinkle replied that she got it from her Gujarati grandfather. She was quick to add that Gujaratis actually have a sense of humour, which people might not believe looking at the BJP there. At another point in the session when prodded by Darius Sunawala to comment on the state of the present government, Twinkle’s reply was that if Asian Paint launches new paints according to seasons, then in this season orange would be the new black!

The session saw a large audience, even sitting down or standing sandwiched between people. I even had to brave the crowd pushing me north, east, and west while I was running to attend her session. The main reason people and I love her is because she refuses to play safe. In a country where writers are silenced just for speaking up, I hope she triumphs. In that triumph, many more writers will take birth. That’s the beauty an empowered woman writer can bring about.