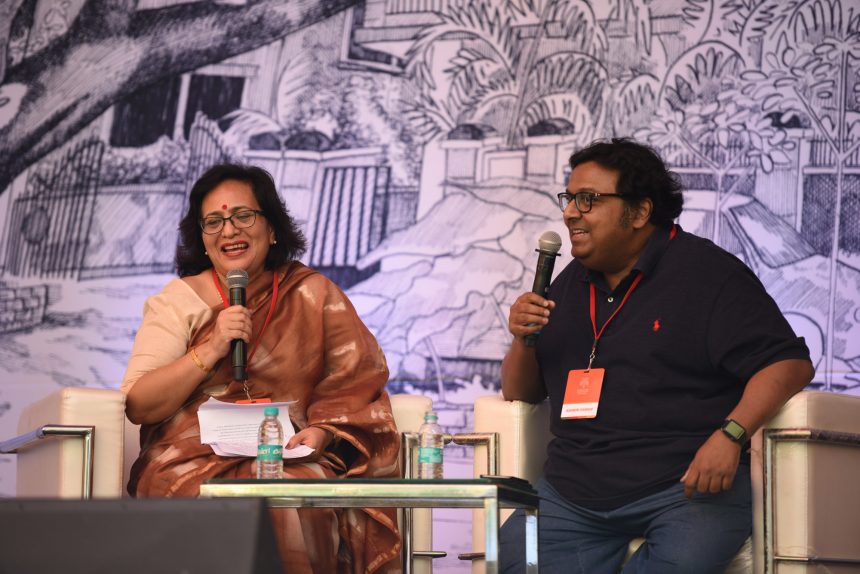 Yet another two days of bards, mystics, words said, unsaid and all that’s left in-between. A forum where ideas clash, entwine, peak and attain a crescendo without any censorship, save that of the mind. The 7th edition of the Bangalore Literature Festival was a welcome to the year-long monotony. The sun shone brightly on the bright-eyed aspiring authors as they rushed to occupy seats near “Naale Baa’ – the venue earmarked for a session presented by Ashwin Sanghi and Madhavi S Mahadevan. Ashwin Sanghi, one of India’s highest selling fiction author and Madhavi Mahadevan, an author, bookseller, editor and advertising copywriter.

‘Keeper’s of Kalachakra’- the latest offering from the pen of Ashwin Sanghi was the backdrop of the session, though the discussion, for the most part, revolved around the twin concepts of Mythology and History. Mythology, as expressed by Sanghi has a kernel of truth from which various other stories spring out. He defined History as a body of facts, someone else’s facts at that. This definition itself explains what Sanghi prefers. Anyone who has glanced at a copy of Ashwin Sanghi knows that his novels are abundant in Mythology. During the session, he reflected back on the innumerous retelling of Mahabharata, which he tells is the best example of what mythology can do – provide a source of inspiration for others to borrow and dip their own pen. Thus, he treats Myths as a treasure trove, from which he borrows heavily in all his characterization and plot. However, this should not be taken to mean that his novels are purely mythological. As told by Madhavi Mahadevan during the session, there is a perfect mingling of ancient and modern elements in his novels. For instance, his novel Chanakya’s Chant, the protagonist Gangasagar Mishra is spurred by the principles of Chanakya’s Arthashastra, a testimony to the hues Sanghi fuses in his novels.

The session also presented Ashwin Sanghi’s view of himself as an author. When he quipped, ‘Lying and storytelling go hand in hand, he managed to elicit a few laughs from the audience. He expressed how he takes liberty in mixing facts and fiction in his novels. Sanghi also presented a brief into how his stories are crafted. His days in business had taught him the art of organization which he now metes out to his writing. He relies heavily on Excel to organize his research, timelines and stories. Looking at his novels, one might not think of its craftsmanship in such a methodical fashion. Such is Ashwin Sanghi’s novels- full of contradictions.

About the author: A wanderer at heart, Vibhuthi is the author of Rainbow, an anthology of poems that was published in 2009 by Nishaganti Publication. She treads through life, by twirling with words, reading into pauses and looking for meaning. She currently writes for Bookstalkist.