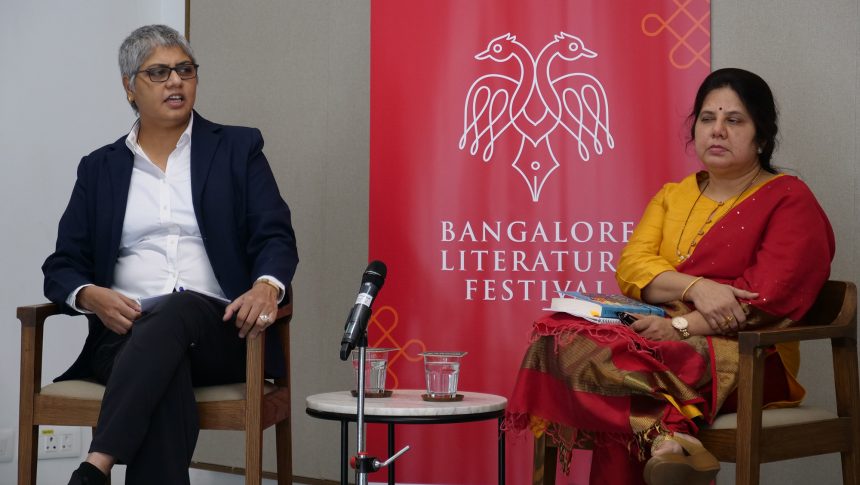 Mythology is long-lived, and its retelling is spread across in various formats, from poems to fictional novels. Today is the second day of the Bangalore Literature Festival 2020, and we have a panel of women writers who have written around mythical characters and stories.

Mani Rao, an author who featured in the Oxford Companion to Modern Poetry, is the moderator. In the panel, we have Madhavi; she’s a book critic and writer of children’s stories and short stories. She has written two books based on the characters of the Mahabharata. Next, we have Samhita Arni, known for her books ‘Sita’s Ramayana’ and ‘The Prince.’  Then we have Rashmi Terdal, journalist and writer, well known for her translation of ‘Uttara Kaanda’ by S. L. Bhyrappa.

Mani starts the conversation by asking the ladies what led them towards writing around mythology and mythical characters.

Madhavi responds that she has heard the stories since her childhood, but it’s only now she realizes how bleak they are. She feels these tales not only need a retelling but a reinvention from a women’s perspective because the role of the women is undermined in the epics. She gives an instance from one of her books, the central character named Madhavi is a surrogate mother. And this story dates back to the Mahabharata times. It was an incident of commercial surrogacy, which is a huge business now.

Samhita shares her view that she has always heard mythical stories that glorify only men’s achievements. If we want to challenge our system for a change, both men and women should join hands and not just either of us. Thus, it is essential to bring forth victories and stories of women from the legacy to influence the future and current generations.

Rashmi gives her take on this that the versions of the Ramayana and Mahabharata that she has read are abbreviated and subdued from a women’s perspective. The female voice is kept submissive and mellow, whereas the men’s heroics are glorified. She points out that even in the Valmiki Ramayana, the narrative doesn’t focus on women and their thoughts. These things drew her towards writing on the mythical stories from the perspective of the women characters.

Mani goes forward and asks the panel if their being women influenced their writing and if it would be different for a male writer?

Madhavi says that her being a woman has definitely helped her get to know her book’s character, ‘Madhavi’ more precisely. Samhita says that she is subconsciously driven since she is a woman even though she doesn’t want her gender to be influential. Rashmi adds to her previous point that Ramayan has always been obsessed with the duties bestowed upon women. She gives an instance where king Dasharatha reminds Kaushalya of her priorities (husband, children, and kinsmen). Then she jumps to another example where Sita leaves the Dharma-Sabha where her exile’s decision took place. Ram was disturbed after Sita left and expressed his concern to his minister, which is highlighted in the book ‘Uttara Kaanda’. She appreciates the writer for giving Sita the voice she deserved and that we need more such writing.

They conclude the session with a note that Sita was liberated when she left the Dharma-Sabha, and this is just one character from the mythology. There are great stories of women who rose above everything that needs to be told and written about.