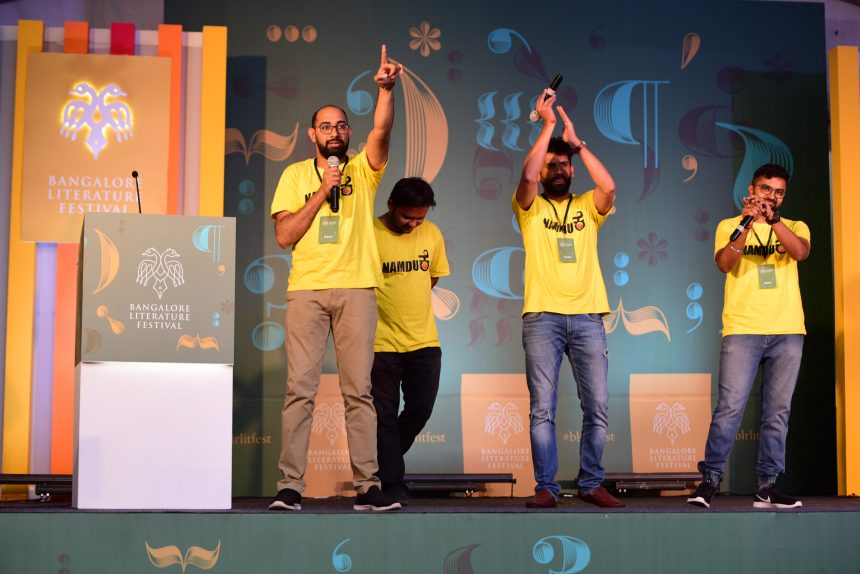 Namdu K is a YouTube entertainment Channel that features Kannada comedy online and offline. Namdu K channel has 73 YouTube videos and 26K subscribers with 11K followers on Instagram. Namdu K was started in 2014 by Shravan Narayan who was working with Infosys. The team also does stand-up comedy in Kannada. The team also does a professional comedy show called ‘One and Half’. Along with the Namdu K team, we also had a team of filmmakers of the upcoming Kannada movie ‘Kannad Gottilla’.

Namdu K team intends to teach Kannada language for non-Kannadiga’s who stays in Bangalore. They wanted to teach at least the Bangalore Kannada for them. The speciality of Bangalore Kannadiga’s is that they will know at least 5-6 languages. That’s because a Kannadiga should speak in different languages to different people in his daily routine. Suppose if you wake up in the morning and go to a salon, you should talk to your hairdresser in Hindi. When you go to the office you will talk in Telugu or Tamil since most of the co-workers speak those languages. In the evening when you go to chat centre for snacks, you should speak in whatever language the seller speaks. Hence it’s mandatory to know 5-6 Languages. Non-Kannadiga’s don’t have this problem. Their life is simple because they manage everything by saying just 2 words which is ‘Kannad Gottilla’.

But the word Kannad Gottilla is wrong. It is Kannada Gottilla. Non-Kannadiga’s remove the last ‘a’ from Kannada and add it in ‘Dosa’ where it is actually Dose not Dosa. The team understands that Bangalore is a Cosmo Politian city but they don’t want the disappearance of Kannada. Also if you stay in Bangalore for 5 to 10 years you are treated as Kannadiga’s. So, non-Kannadiga’s has to take little steps to learn Kannada. Learning Kannada is very easy. Learning Kannada will help you to save your money as well. Suppose if you go and ask an auto driver, “Sir, I want to go to Kormangala”, he will quote Rs. 300. If you ask “Sir, Kormangala bartira? “, he will quote Rs. 200. If you say, “Anna Kormangala bartira?”, he will say Rs.150. That’s how learning native language helps. In Bangalore, the distance is measured in terms of time. In Bangalore, the culture change from door to door.

The team explains how to learn Kannada and asked the audience to acknowledge that we all are Bangalore Kannadiga’s and we will learn the native language. The team believes that the survival of a language is based on the experiment that it does on the art form. The team played a short video of 4 Minutes about Bangalore Kannadiga’s. The team also did a stand-up comedy to bring a little extra laughter in the audience.

‘Kannad Gottilla’ is an upcoming Indian Kannada language thriller movie written and directed by Mayuraa Raghavendra making his debut. The director Mayuraa Raghavendra showed the trailer of the movie and explained the movie is based on the theme of Kannad Gottilla and wishes to encourage all non-Kannadiga’s to learn the native language Kannada. The movie will be screening in theatres on Nov 22nd and requested all the audience to watch and support the movie.

About the Author: Swapna Patil is an author of adventure travel and romance. “Why stay at one place and talk about it, when you can make your whole life more interesting by travelling and narrating those stories in words” is the motto she lives by. She is also a trek leader and flirts with words on the top of mountains and chooses poetry over prose. She currently writes for TheSeer.