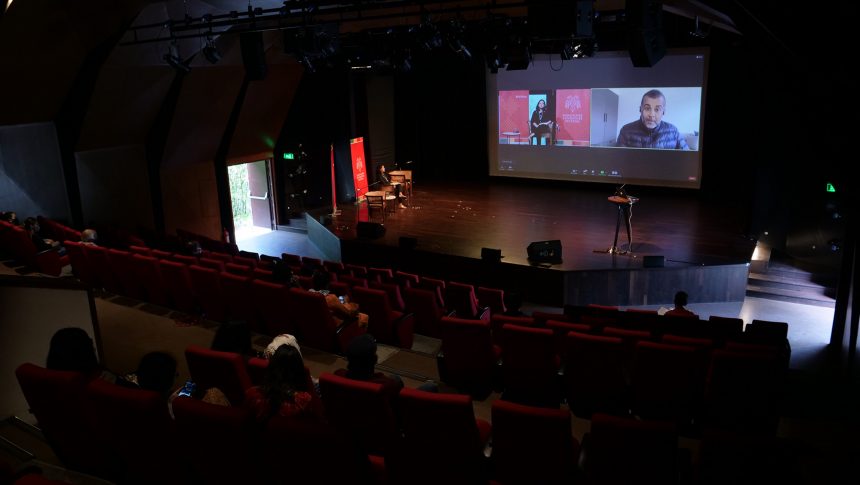 This conversation on Chetan’s recent murder mystery started on a light banter between Chetan (who joined virtually from Delhi) and Shrabonti, who, Chetan remarked, has done too many interviews of him; he feels she is his therapist!

From Love Stories to Murder Mysteries

Shrabonti quizzed Chetan on the setting of his book and his transition to writing mysteries. Chetan started by saying that he wrote love stories for 12 years and is now moving into murder. His previous novel, ‘The Girl in Room 105’ was an initial part of the transition. This latest book, ‘One Arranged Murder’, is set in a Punjabi family about a murder that happens on the night of the ‘Karva Chauth’ festival.

How challenging is it to write a murder mystery?

Shrabonti added that alibis must be created, the murderer’s identity should not be given away till the end. Chetan responded that it is a different ballgame to write a good mystery, there is a lot of craft in it. He studies authors such as Agatha Christie and Alfred Hitchcock to get various techniques for use in his stories. To that, he adds in Indian flavors, since readers want to relate to the Indian middle-class context.

Chetan referred to a ‘nerd-like precision’ he aims to bring into his stories; his background in engineering and banking is helping here. Chetan revealed an interesting trivia – that he uses spreadsheets to write! This helps him bring in precise endings.

Shrabonti digged into why Chetan chose this festival as the setting for the murder. Chetan referred to a newspaper article he read about a lady at Gurgaon who was pushed to death from her roof on ‘Karva Chauth’. He also said that a beginning which makes us ask, “How did it even happen?”, “Why did it happen?” forms an amazing start to the story. It sets the stage for an intriguing murder plot.

The ex-banker revealed that he brings in a number into each book title – e.g. ‘2 States’, ‘Revolution 2020’. He considered having ‘Chauth’ (the 4th day of the moon) in this title, however dropped the idea since this festival is not celebrated in all parts of India.

Shrabonti spoke about how protective Indian families are; which makes a family member an unlikely murderer. Chetan replied that it is a façade. He referred to how people put up only happy and good pictures on Instagram; the not-good moments are hidden away.

Chetan added that he aims to give his readers insights into the Indian family system, not just a murder puzzle. Shrabonti commented on how people related his murder plot to Sushant’s case since the book was released around the same time as Sushant’s death.

Chetan clarified that he wrote the book last year; its launch got delayed due to Corona and it happened that the book’s publicity period was in August when Sushant’s case was in the news. The case was so gripping that he was quizzed on it during every interview and every channel projected only those responses.

He reflected that, given the right mystery, India can get gripped; hence he believes he made the right switch from romance to murder.

Shrabonti pondered on whether the obsession with unexplained death is manufactured by media.

Chetan referred to it as ‘drama’ and went to say that drama is what engages people. He expressed his concern that news channels often cross the line while looking for drama to compete for viewers’ attention; “this is dangerous for the country”, he added. He also questioned why viewers should look for drama in the news and said, “this is a reflection of who we are as people”.

His take on ‘Love Jihad’

Chetan said that the term, ‘Love Jihad’, is a terrible term, since currently, ‘Jihad’ is a term that one closely associates with terrorism. He questioned why it was finding resonance among people.

He went on to talk about conversions. He said that conversion should not be done under duress and said, “I don’t know if conversion is a great recipe for harmony”. Chetan stressed on the need to have a proper discussion on conversion between various religions instead of ultra-right or ultra-left debates.

The first question from the audience was on his path to transition from romance to murder. Chetan responded that it was a big challenge; a murder plot needs a lot more structure to make the suspense satisfying. The second question dwelt on politics – “Should we discuss politics at home?”. Chetan quipped that WhatsApp groups are the worst place to discuss politics. He explained that most people get emotional and hurt in such conversations, hence it is not wise to discuss political topics on such a forum. He observed that the politicians of opposing parties do not fight; in fact, they wish each other on their birthdays!