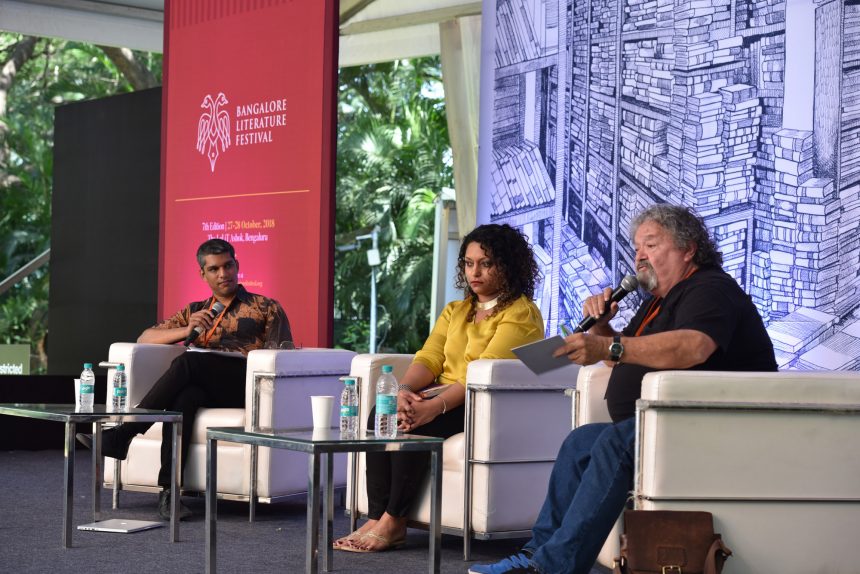 Rajith Savanadasa started the session at ‘Adjust Maadi’ venue by asking the audience how many of them had been to Australia to unpack the idea of Australia and there were quite a few.

He asked Roanna Gonsalves who grew up in Mumbai about her ideas of Australia before she visited the country. She said before visiting as an international student she watched the Bodyline series on TV and she knew that there were people who were called aboriginal people somewhere in that country. However, she had zero clue about the history of colonisation between India and Australia. “There are many ways of being Australian just as there many ways of being Indian,” she said.

Rajith spoke about his idea of Australia. The idea of Australia according to him was beautiful green plants and river flowing through but there was also the idea of outback, which seemed harsh and inaccessible. Philip McLaren who is from Redfern, Sydney said that he was always curious about aboriginals of Australia. In my opinion Haki Pikis are original people of Australia. In 1960s, all these aborigines lived on the fringes of cities and they had to get out of the city before dark. Now they all mostly live in the central desert part. They are very dark people. This area where they live is called Abek. In fact, they have been living in Australia for more than 17000 years and have seen two ice ages.

When asked by Rajith about how his minister calls them Paranoia, Philip replied, “Yes , it goes back to the date when James Cook first set his foot in Queensland, Australia and put a flag of England, claiming it was their land. He did not even consider these aborigines as humans. That is how it was then as King George sent these men to claim whatever land they step on to.

Later Roanna read out an interesting story from her collection where she used rhythm and reputation instead of character and plot. The story was about Indians going to Australia and the perceptions of indigenous people.

Philip McLaren mentioned that when he was writing his second or third book, he heard about mining in the northern part of Abek. Mass and mass were dug and he wanted to see the same. “It was just horrible when I saw it from top. I was outraged. I wanted to include a deity of aborigines and I chose Lightning Brothers, a character which is typical of that land as the highest number of strikes of lightning happens there compared to anywhere in the world.”, he added.

Rajith asked him about his two books getting released in India. Philip spoke about a character from one of these books who is an artist of aborigin. This young man wants to go to Paris but he has never seen a city and does not know good English but knows four aboriginal languages otherwise. The session ended by provoking the audience to visit and discover Australia.