Paro to Priya: Namita Gokhale in conversation with Mita Kapur 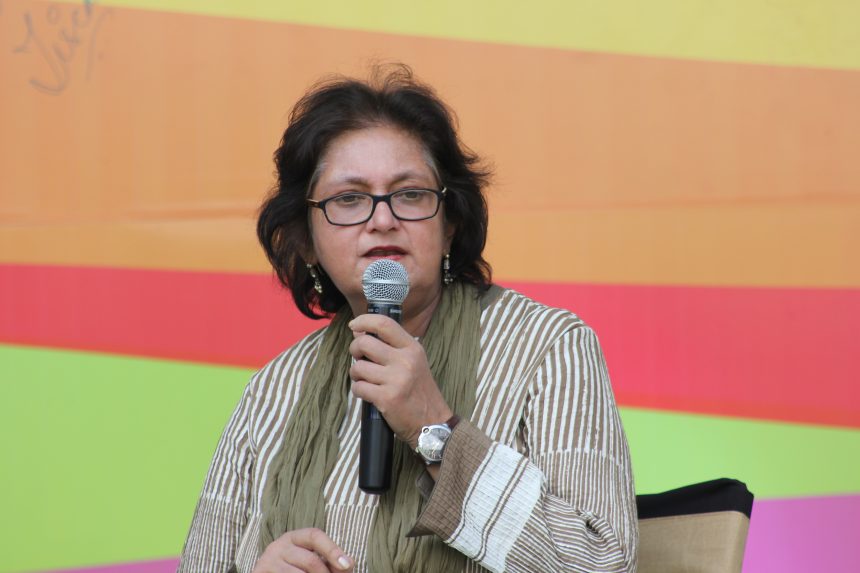 The conversation began with Namita responding to a question about her quest as a writer: “The process of writing is a quest in itself; a journey of self-discovery,” she proclaimed. “A writer’s first book is usually biographical in nature, related to his or her personal experiences. Writing is directed at returning to one’s own script.”

Next, Namita forayed into sharing the details of her early days as a creative writer, about writing her acclaimed debut novel Paro: Dreams of Passion. While the kind of reception Paro received outside India was initially overwhelming for a college dropout like her, Namita was very surprised by its poor reception in India due to the work’s sexual tones. Even though people commonly assume Paro is a version of Namita herself, the author begs to differ. She clarified that the character was actually an amalgamation of two to three women whom she knew. Namita’s role was merely that of a narrator. Moving on to her roles in print and electronic media, Namita found instant success with her film magazine Super. She was later approached by Doordarshan to do Kitabnama. She agreed to it, given the massive outreach a platform like DD provides. Namita stresses that her enjoyment in doing the series was derived from the opportunity to leave an indelible imprint on the Indian literary scene.

The conversation then shifted to Namita’s work which exudes heavier themes, such as The Book of Shadows. She credits the personal trials that bombarded her life at that point as the inspiration for this work – being diagnosed with cancer and losing her husband while she was still in her thirties. Experiencing a certain proximity to death, Namita wanted to capture its essence in her literary works. Interestingly, she observed that The Book of Shadows disappeared from bookshelves soon after its release while her first work, Paro, was still having a good run.

Another work, Shakuntala, is known for its vibrant vocabulary. Namita found writing the Hindi version of Shakuntala to be much easier vis-à-vis writing in English as she could express the emotions in fewer sentences. Namita disclosed that she intends to make Shakuntala into a film.

When the talk turned to In Search of Sita, Namita referenced empathy for Sita’s quest for self-assertion and the many ordeals she had to face during the course of her life. Countering the incredulous reactions abroad to the many versions of Indian mythology, Namita notes that myth is never static in India. Namita reflects on her days growing up in a Kumaoni Himalayan town in Nainital as one of the most enjoyable phases of her life. She admits to using a lot of her childhood experiences in her work. Coming from her part of the world, psychic experiences were nothing new or extraordinary. She also credited Ipshita, a psychic she met, as her inspiration for some recent work. Namita views herself as skeptical rather than rational.

The session concluded with Namita’s thoughts about freedom of social expression, emphasizing that we live in a time of heightened sensitivity. She maintains that she doesn’t like to confrontational about issues that people care about, but by the same token, she will not hold back from speaking her mind about issues that matter to her.