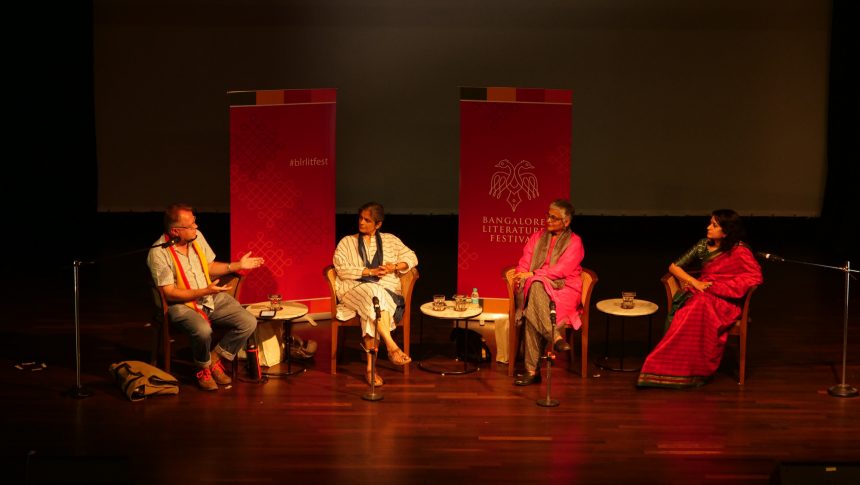 The conversation began with Zac, who resides in Bangalore, narrating an incident in which he stopped a man trying to throw garbage into Sankey tank. He was rebuked on being a foreigner who cannot question a native of Bangalore. This led to the first question.

What defines a permanent resident of a place?

Usha Ananda Krishna mentioned that it is only something which we currently think is permanent, a ‘permanent address’ column in a visa form. Usha KR added that the idea of impermanence is built into how a government perceives its citizens, referring to the ‘present nationality’ and ‘original nationality’ columns in a visa form. Home is a place of comfort; however, it is a bubble we leave as we grow up and venture out. According to Aruna, home is a place of belonging, where you are accepted for what you are. She grew up in Bombay and has now moved to Bangalore. She relates to Bangalore as her home now; she cheered for her ‘home’ team RCB in a match against Mumbai Indians and can relate to native jokes.  She referred to Robert Frost’s quote, “Home is the place where, when you have to go there, they have to take you in”.

Zac compared Bangalore with Shanghai and Athens and mentioned that this is a city where a lot of people from other states and even foreigners stay, it is also multi-lingual and very homely where your landlady gives you ‘idlis’ when you are unwell.

Zac spoke of how Gandhi discovered how Indian he was when he lived abroad; Usha Ananda Krishna and Usha KR agreed with him. Aruna had a slightly different perspective and mentioned that, for teens, the first home outside the parental home represents freedom and a first sense of individuality.

Usha KR felt that an essential part of growing up is to experience other cultures – language, music, food, art, literature. Aruna’s book, Mango Cheeks, Metal Teeth, draws inspiration from her summer vacations at her ancestral home. Cousins from various cities used to converge at their grandparents’ big home and transition from bland, urban kids to discover a different version of themselves.

Usha Ananda Krishna remarked, “I thought your house was a place to park your soul”.

Usha KR spoke about one of her characters, a boy brought up in a cocoon who falls in love with an unsuitable girl. His family comes down hard on him for this; he realizes that home is comfort only if he plays by the rules. Zac narrated about how Lord Buddha was constantly travelling once he stepped out of home, headed back to his parental home when he became 80, only to die of food poisoning on the way.

“Bangalore is a setting, organic to my novels”, remarked Usha KR. She referred to how changes in the city influences the character, as in her novel, Monkey Man. It said it brings out the transition of Bangalore from a pensioner’s paradise to India’s Silicon Valley; some people feel they are losing out in the race, while others like the transition.

Are you a rooted writer?

Zac posed this question to each of the panelists. Usha Ananda Krishna is not; for her, home is wherever you think you are stimulated and hence can change.

Aruna, on the other hand, said she is rooted. Home for her is a mixed bag of laughter, conflicts, and sorrow. She referred to her book, Monsters Still Lurk – wherein home becomes a place of sorrow for the professor when his wife falls sick and he stays in office.

Usha Ananda Krishna’s response was – “…you can have a home yet be homeless, if you don’t identify with the values”. She went to remark that not all of us want a home, we are wanderlusts.

Usha KR took this perspective further to say that the concept of home changes as you grow. Aruna elaborated – “first it is your parental home, then the home you share with your partner, later your parents come and live with you and finally you go live with your children.”

Zac spoke about how his quest ended once he read R. K. Narayan’s Malgudi Days. Through fiction, he realized that he belonged in Bangalore. Aruna reminisced about the fictional home in Enid Blyton’s books, how she yearned to know what ginger ale was.

Jane Austen, with social concerns and humor in her books is the inspiration for Aruna KR. She also spoke of a book that has inspired her, Penguin’s Song by Hassan Daoud. The book is set during a war in Lebanon yet does not get into a description of the war. It is about a deformed man who watches the city changing. Something that is understated draws her attention, she said.

The discussion had been so engrossing that it was soon time to conclude. In summary, the thoughts expressed by the panelists converged on the point that a permanent address is impermanent and changes as we journey through life.