Putting the ‘Science’ in Science Fiction 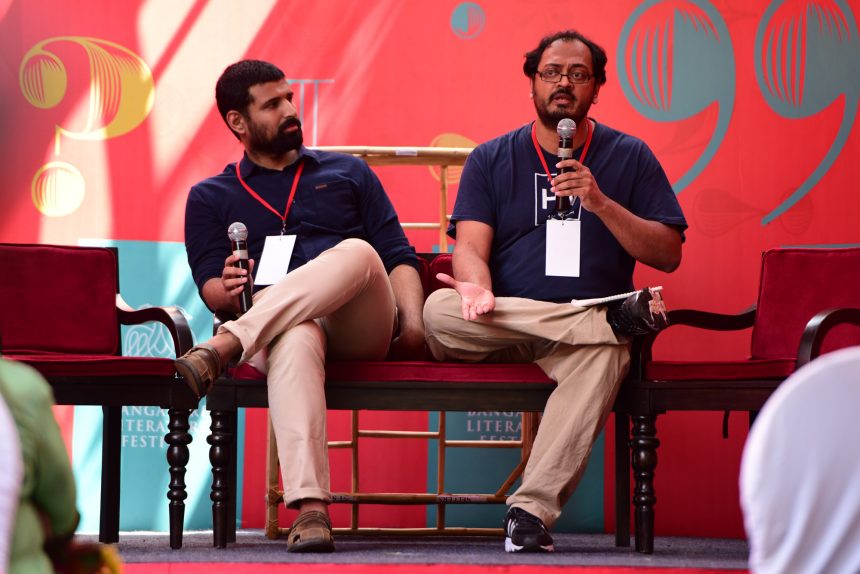 So what if it was a peak afternoon in Bangalore at the Literature Festival! At 12:30 PM, the Red Couch was brimming with audience awaiting the interesting conversation between the SriLankan science fiction writer, Navin Weerarante and the award-winning playwriter Thomas Manuel.

Navin opened the conversation by comparing the audience to that he would have expected in Sri Lanka, that is just a maximum of 1/10th. (By a show of hands, it was evident that while the audience had five-six scientists, most were science-curious population.)

Navin spoke about how he got excited by science fiction in his early childhood at around nine years of age when his dad once gave him the third book of Odyssey by Arthur Clarke. A book with no picture, no gun, and no clear bad guy. It had a place called Europa and it made Navin extremely curious. The concept of a human as a small speck in one little speck of dust in the solar system intrigued his curious little brain.

Navin holds on to the belief that reading something about the future that could be real is very fascinating to a human brain. When you write hard science fiction you make sure its factually right and at the same time, you add a predictive aspect to it too. He beautifully explained how homo sapiens that have been around for 300,000 years were the first believers of fiction. Our children and the next generation will create the next set of humans who will be nothing like us. This is the future we are rushing into. Artificial intelligence and technology are making things happen. Climate change will destroy the present. We need to be ready for it and curious enough to bring changes.

On the other hand, Thomas brought in a different perspective to hard science fiction and the science within it. He doesn’t think of it in terms of usefulness. To him, hard science fiction is interesting because science is one of the few ways of knowing. It is the language of learning and being curious. He sees no reason to assume that someone who designs computer science web applications will also be equally inquisitive about the universe and it’s working. Different things will interest different people. Personally, Thomas said his interest in science fiction comes from his interests in other things like art, science etc. and to know what happens if we change one aspect of this being. Thomas made a statement which got audiences applauding, “We come for the robots but stay for the humanity!”

Navin continued the conversation while assuring that he doesn’t want to come across as a hard science fiction snob. He continued explaining that the reason he was compelled to write his book “100-gram mission” was that he is terrified by the current climate change. He spoke about Syria and Libya situations and how they are warnings of what is in store in the future.

Thomas very clearly articulated that hard science fiction stories can be considered to be of two broad categories. The first kinds are those that Navin writes. An example would be the book ‘Martian’ by Andy Weir. The most exciting part of this category writings is the realism of problem-solving. The second kind of stories are more fiction oriented and they create a sense of wonder, like “Three-body problem’ by a Chinese writer, Cixin Liu. A detailed narrative of this book was unveiled to bring out a key point that scientists might find no realism in them. But criticism is not what will help. These stories have their role to play. They excite people in a different way. It gives a feeling of vertigo that this is something very novel.

It was interesting to see two aspects of science fiction writing. One that demands and brings across legitimacy and second serve the purpose of creating a sense of wonder and awe. Navin expressed his trouble with understanding how are we tolerating this world where people are bragging about their ignorance of environmental changes. He left the audience with daunting questions. He added that science fiction writers have a responsibility to make people see the wonder and make them curious, inspire people to think about science.

The authors also agreed on the importance of soft science fiction and social science fiction genres. The session ended on a lighter note that there are no bad genres but only bad writers.

Navin and Thomas also helped the audience understand how they can self-publish their science fictions on amazon and join Facebook groups and not let the gatekeepers keep you waiting. Our only chance to survive with our current living standards is the need to marry science and technology responsibly.

About the Author: Nehal Agrawal is an expressive-impulsive woman with the halo of positivism and energy, a smile that emanates from the heart and wants to reach out to the world. She loves books, children, rawness, originality, and nature – not in any particular order. A budding poet and a writer under the handle #fursatkealfaaz on instagram. She currently writes for TheSeer.