When All is Said: Nayantara Sahgal and Ritu Menon in Conversation with Sunil Sethi - Bangalore Literature Festival (BLF)

When All is Said: Nayantara Sahgal and Ritu Menon in Conversation with Sunil Sethi 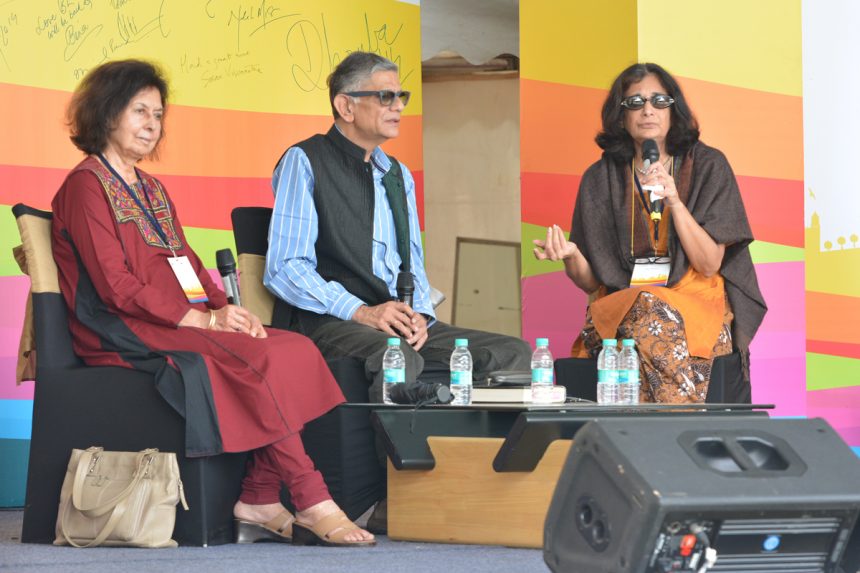 – Ritu Menon, Biographer, Out of Line

Nayantara Sahgal, born into the first family of Indian politics – The Nehru family and not the Nehru-Gandhi family, as she firmly reiterates, is most known for her commentary on the Indian political scenario from the late 1960’s and beyond. She is also equally well known for her vehement and extremely vociferous opposition to Indira Gandhi’s policies leading up to the Emergency in 1975. This, she says, was a very trying time as people were censuring her for criticizing her cousin, whom she had been quite close to till then. Yet, steadfast in her beliefs, Nayantara continued her rally against Indira Gandhi and her autocratic rule. Sahgal felt it her duty to carry on Nehru’s ideals and legacy.

At this juncture came another tumultuous period in her life when she left her husband and moved in with Bunchi Mangat Rai, a civil servant, whom she lived with openly ‘in sin’, as it was referred to at that time, she recollects.

Perhaps it’s not understood well enough or widely enough that women fall in love with their minds, feels Nayantara. “I fell in love through my mind and found a like-minded person with whom I could share my personal as well as my political views,” she says, summing up her much debated relationship with Mangat Rai.

“Nayantara’s marriage broke down because she departed from the script and in that departure found herself through her writings,” explains Ritu Menon while discussing the profound emotions that the deeply moving letters exchanged between Nayantara and Mangat Rai induced in her.

These volumes and volumes of letters not only chronicle Nayantara’s personal life but also the political and social situation in the country for over a quarter of a century.

“So, how did political life shaped her writings?,” asks moderator Sunil Sethi.

“Two horrifying events influenced my work. One when a Hindu, Mahatma Gandhi, was shot by a devout Hindu and then the killing of Muslims by Hindus. In between, the country managed to shake free from the shackles of political bondage and rise to a new dawn,” says Nayantara, also explaining how her love for fiction writing was interrupted by her personal life which led her to switch to non-fiction in order to make a living. Commenting about the state of the country today, Nayantara finds comfort in the strong foundation laid by our forefathers and says that all hope is not lost with the unshakable promise of democracy in the country.