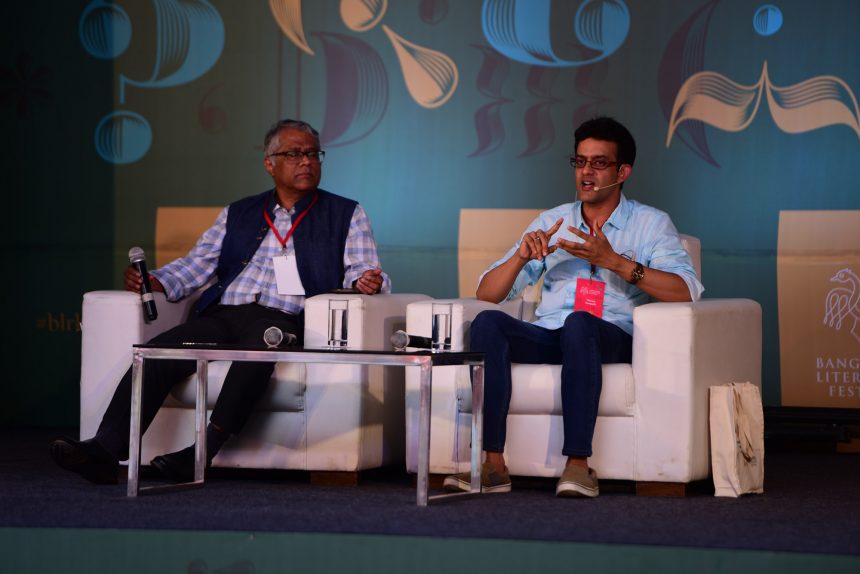 Vinayak Damodar Savarkar commonly known as Veer Savarkar has attracted renewed academic interest in the country thanks to the highly successful biography by Author and Historian Vikram Sampath. While Savarkar has always been a device for shrill disputes in our country’s polity, this rare academic revival brought him and his biographer to the festival. Vikram Sampath, who is one of the founders of the festival was deftly interviewed by veteran Journalist and SwarajyaMag’s Editorial Director Mr. R Jagannathan.

Mr. Sampath while replying to Mr. Jagannathan said, “The proponents as well as opponents of Savarkar know very little about him. He is discussed during every election for political gains and to some extent both the so called Left and the so called Right have misunderstood him. There are many positions that Savarkar takes which will make the current Indian Right uncomfortable. For example, his position on caste system, divinity of cows are things that today’s Right might not like. Also, a bulk of misunderstanding comes from the history books written by the Left historians.” Mr. Jagannathan went on to ask about the ensuing debate after the demands of Bharat Ratna upon Savarkar. “Ofcourse, this was done with an eye on the elections. In fact, Uddhav Thackerey set the cat among the pigeons in his book launch. Thereafter, the BJP picked it up. Now, both parties have together won the elections, so it remains to be seen what happens of the demands. Also, it is true that these awards of national importance have been the preserve of one particular ideology and family. Our freedom struggle has been narrated in a monochromatic way which is not true. So, maybe it will be some kind of recognition for him. Although, even if it is not bestowed, it won’t make any difference to him or his family.”, Mr. Sampath answered.

Mr. Jagannathan asked several other questions pertaining to Savarkar’s shift in his outlook from when he wrote about Hindus and Muslims fighting together in the first war of Indian independence in 1857 to his idea of Hindutva and also his time in the Cellular Jail at Andaman. Mr. Sampath went into detail and explained how Savarkar was actually the one to start the first secret society in India called Mitra Mela which was later called Abhinav Bharat to create disaffection in the armed forces. For his book on the 1857 revolt, Savarkar spent five years in London, researching in libraries. He understood the Indian perspective of the mutiny and reinterpreted it as the First War of Indian Independence. The book was so popular and effective amongst the revolutionaries that Bhagat Singh got the second edition published. Similarly, Rash Behari Bose and Netaji Subhash Chandra Bose too got the book republished.

Savarkar was somebody who spoke of different communities being rainbow on Indian sky and in Mr. Sampath’s opinion, two particular events – first, his experience at the cellular jail where the British played the game of divide and rule and got the Muslim jamadars to convert the Hindus and second, Gandhi’s role in the Khilafat movement to mobilize an entire community to fight for a movement thousands of miles away that resulted in riots across the country, affected his positions and ideas. During the Moplah riots, Gandhi praised the rioters as great warriors fighting for their community and addressed Abdul Rashid, the killer of Swami Shraddhanand as his brother. Savarkar thought that Gandhi needed an intellectual counter and a small book called ‘Essentials of Hindutva’ that he wrote from Ratnagiri jail should be read. Mr. Sampath also stressed that the allegations of him being a coward because he wrote mercy petitions were unfair to him. Petition was a legitimate legal recourse available to the prisoners then and even Gandhi himself on requested for help by Savarkar’s brother, asked him to write a petition and wrote one himself. Also, the petitions were for the prisoners and Savarkar was ready to stay in the jail if others were released at his expense.

The discussion was brought to a close with Mr. Sampath explaining many points where Savarkar’s views would differ from the current Right of our country. There on a subject like caste system, his ideas were more like those of Ambedkar and not Gandhi. Savarkar believed that the cow must be treated as a utility animal and not a divine being and his idea of Hindutva was more cultural and nationalistic where allegiance to the country was the only identity marker. With a couple of questions from the audience members, Mr. Sampath explained the inclusive nature of Savarkar’s Hindutva and his idea of ‘equality for all, appeasement of none’.

About the Editor: Abhishek Jha is the Founder Writer and Editor at TheSeer.