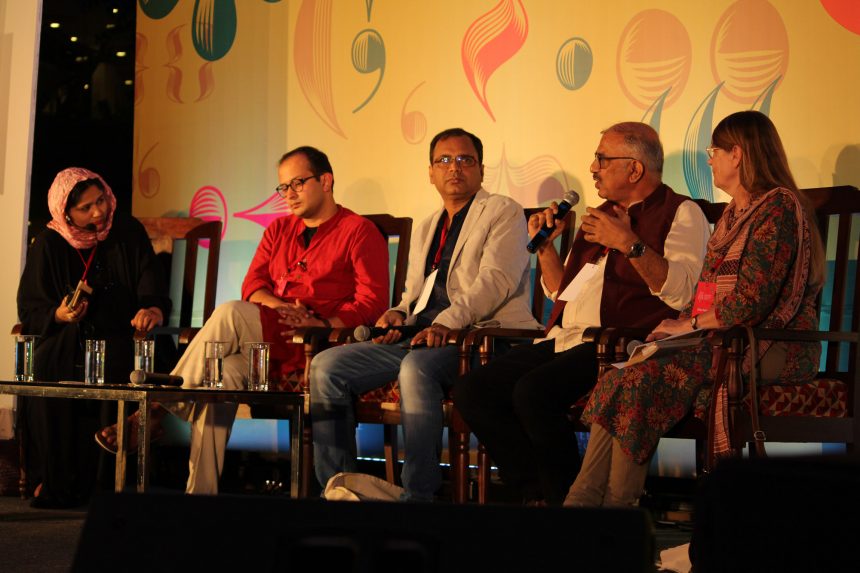 Small town, is not just a matter of small town but big dreamers who come out of that with flying colours. Andaleeb Wajid, a Bengaluru based writer who has authored several books on different topics like food, relationship etc. has herself made a confession that she never lived in a town. She couldn’t imagine on being a part of town as she grew up in the city of bengaluru.

The discussion began with Abdullah Khan who has written ‘Patna Blues’. A man has grown up in a small village from northern part of Bihar where there was no electricity and other basic facilities. On his first visit to the capital city ‘Patna’, after seeing the river Ganges, has a question in his mind which he asks his father, as to whether ‘this is an ocean?’. Table fan was a luxury during his times. His feelings towards his own town and usual aspirations of middle class town people led him to pen this book.

Tanuj Solanki, who has lived in Muzaffarnagar, felt that the soul of a country actually lived in various social media like whatsapp and facebook. He agreed that small towns do play a big role as he had lived in Muzaffarnagar for 17 years. He mentioned the communal riots and tensions that big districts or cities have which are unusual in towns even today.

Parimal Bhattacharya, another speaker told the gathering that he hadn’t actually grown up in a town but moved to Darjeeling in his twenties as a teacher. But only after 15 years of returning from that place he wrote the book ‘No Path in Darjeeling Is Straight: Memories of a Hill Town’. He also said that Darjeeling is very different from other towns or villages where different communities live peacefully together.

Gillian Wright, a translator and writer said that there was something that broke us apart from towns to cities, but there was some continuity also in terms of culture, poetry etc. She feels and says big voices come from small places.

Small towns may be a nostalgia for people who are obsessed with cities and its pollution.