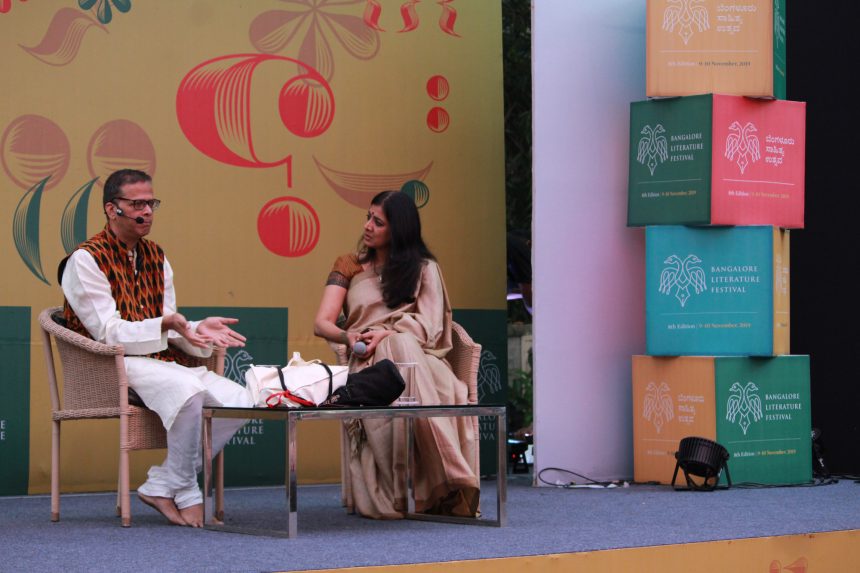 What happens when you put a fiction writer in conversation with a poet and if both of them are very good old friends? You experience a very fulfilling, light and informative Sunday morning conversation.

Arundhathi Subramanian, an award-winning author of twelve renowned books and Jerry Pinto, an equally renowned writer and a journalist, got into a conversation about their works and inspirations.

It was an informal session that commenced with Arundhathi asking intriguing questions to Jerry and Jerry responding with very insightful answers.

Arundhathi expressed that her early impressions of Jerry were that of an irrepressible storyteller. Jerry would throw a cheerful malice and had a sheer delight of spinning a yarn. She specifically asked him about his book “EM and the Big Hoom”. What took the book so long? Jerry explained that he wanted to be sure and ready before launching something so close to his heart. He expressed that if he hurried into writing a book he might be turning his family into caricatures and that was not his intent. He wanted to convey the love of the family for each other and how it is not always an easy path to tread. But nonetheless, one has to embrace the thorny painful journey. Finding the tone for the book was the biggest challenge for Jerry.

Jerry then openly expressed that he felt like he was being naked while telling his story and how his old persona was catching up with him. He confessed that sometimes a writer strives to be witty in their writing, so that the audience accepts and focuses on it more than the content. He expressed how he has realized the importance of going bare and raw in his writing.

Arundhathi then brought up an important aspect about how one handles and negotiates family’s sensibilities while writing a personal story. Jerry agreed that he cares about it and no book is worth hurting a person you love. But an interesting question to ask would be if you make yourself a part of that family? Do you respect your own feelings and hurting them in the process? There is no sure shot formula of predicting the outcome of sharing a story of your pain. He said that he wishes well to all the writers who want to write about their stories and encourages them to go ahead.

When asked if Jerry is different today and if the impulse to tell stories has changed over time, Jerry said that there is a difference impetus today. The urgency is much less. He thinks it is very useful for a writer to be silent and listen to other people’s story and record them. He learnt a lot about being an empathetic listener. To carve out a space where words and stories are important. To be heard is to be loved. It was endearing to hear this view of his experiences. Jerry said that he loves to relentlessly slide to his old self, the unfilled unnourished self when he is amidst his close people.

Jerry also said that he believes there is a moral responsibility to tell stories. One has to care about the past to weave it into a story. He feels that his stories are driven by the need to be an ambassador who could be behind a teddy bear, a dancing superstar or a Dalit character in a story. Infinitesimally one has to bring the shift.

After this refreshing take on stories, the conversation shifted to Arundhati.

Jerry introduced Arundhati, knowing her long enough, as a very fine cultural journalist having done very fine pieces on dance and theatre. Arundhathi has to her credit some magnificent prose books like “The Book of Buddha” and “Sadguru, More than a life”. Jerry also strongly recommended her book “Eating God”, a wonderful reminder of what Hinduism can be.

When asked her reason to choose poetry as a central mode of expression, Arundhathi did not give any particular one. She admitted that her poetry rather sells modestly. On a lighter note, she also quoted that researchers claim that poets die sooner than writers. As a child there was an impulse to tell stories. An excitement about theatre and enacting stories – the performative element. Poetry seemed like a place where one could have a vertical engagement with oneself. That verticality of going deep but also reaching heights is the excitement of poetry. How vitally poetry and dance are connected. The capacity of language in poetry to leap from one place to another. She expressed beautifully that a pause on a page of poetry really means something. She wanted to come out of those blank spaces and poetry was her medium. Poetry came with much less anxiousness and much perforated to Arundhati over the years.

She said that her aspiration in life is to attain poise without tension. The conversation ended with a mesmerising narration from Arundhathi’s poetry book “Love without a story”, dedicated to Avviayar, the legendary Tamil poet.

About The Author: Neha Agrawal is an expressive-impulsive woman with the halo of positivism and energy, a smile that emanates from the heart and wants to reach out to the world. She loves books, children, rawness, originality, and nature – not in any particular order. A budding poet and a writer under the handle #fursatkealfaaz on instagram. She currently writes for TheSeer.