Tere Ishq Mein: Looking for the Divine in Music 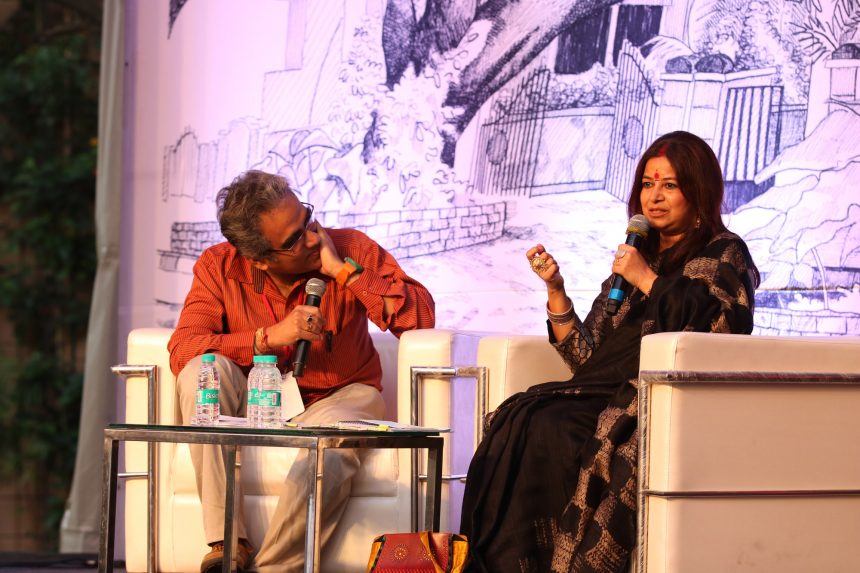 When the sun retires after a blazing day, and the temperature drops, nothing else can make it more magical than soulful music from the accomplished Rekha Bharadwaj, and the mystical acoustic guitar player Mayukh Sarkar. Shantanu Ray Chaudhuri, the author and editor of HarperCollins, was the voice of the audience, requesting beautiful songs, and helped Rekha share her musical ride. Through her many melodies, Rekha traces her journey from when she was singing for herself, and in pursuit of divinity through Sufism, until recently when music directors requested for her voice.

Rekha acknowledges that her voice is not the conventional, high pitched ones that are allegedly the norm for new age singers. Hers is a soulful one, that when mentioned by music directors initially, she knew she wasn’t going to be shortlisted for a song.

As someone who practices religiously, Rekha’s talent was first pursued by her husband, Vishal. His hand in practice, and understanding the technicalities of the music industry played a vital part in her rise. Her song from Chachi 420 materialized after the actor Kamal Hassan insisted on her version of the song, even though the director was considering a different singer.

Ishqa ishqa was the song that brought her the recognition that she very well deserved. So does, Namakh, a song that was casually recorded on Vishal’s phone, eventually made it to the chartbuster list! Rekha’s magical voice, coupled with the fantastic notes from the guitar of Mayukh, was not only divine, but a refreshing medley of a struggle that saw the light of day, and the gradual progress in the unplugged tunes that ranged from soft Sufi melodies to peppy Russian inspired music.

About the Author: A believer in the subtlety of magic in everyday living, Shobhana seeks the same from the books she reads and the poetry she writes. Immerses herself in music, literature, art, and looking out the window with some coffee. She curates her poetry, and occasional verses in her blog Thinking; inking. She currently writes for Bookstalkist.