The Business of Sex 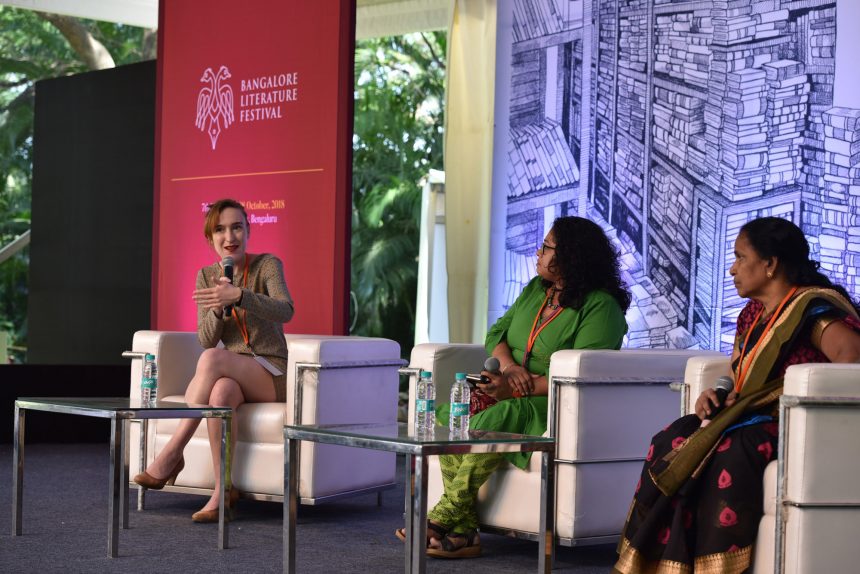 Modern India is very forward when it comes to debating and coming to a resolution on any topics that might have raised a few eyebrows before. Not so much when it comes to the business of sex. The taboo around sex workers is sadly not going down anytime soon. This is mainly because society cannot see clearly the point where exploitation has ended and empowerment has begun. The session, ‘The business of Sex’ brought two authors to the forefront: Nalini Jameela and Nora Bossong. Nalini Jameela, a sex worker from Kerala is the author of ‘The Autobiography of a Sex Worker ‘and Nora Bossong is a noted German author. The moderator of the discussion was Reshma Bharadwaj, who is also the translator of Nalini Jameela.

The session began with Nora Bossong shedding light into the decriminalization of the business of sex in Germany. Though at the surface this might seem like positive news, it had the impact of dividing feminists on the issue. On one side is the feminist who applauded the move for the agency it gave to the sex workers and on the other hand are others who see it as a normalization of prostitution, which is further associated with the breakup of monogamy, contributing to trafficking and exploitation of woman. She further expressed how Germany became Europe’s hotspot of prostitution soon after this.

Another point that was stressed upon by Nora Bossong, later echoed by Nalini Jameela related to how in the business of sex, a person who buys the sex operates under the notion that they have bought the person. They fail to understand that it is the service that their money has bought them and not the person offering the service. This failure to demarcate contributes to exploitation and stigmatizing. Jameela further explained the issue of stigmatization. According to her, this stigma is not only in the eyes of the society, but also persists in the mind of the sex worker. The perception of sex business as something wrong feeds into the general perception of sex workers. Jameela also pointed to the importance of ensuring that brothels are managed by a sex worker. The idea of an outsider as an owner, a person managing the finance, time of a sex worker would negate the whole idea of empowerment of a sex worker.

To the question whether writing would bring about change in the life of a sex worker, Jameela replied, ‘Said words are fleeting, what we write cannot be changed or altered by anyone. My autobiography would present the realities- it would be a testimony to the way we are treated and can be used as an argument or as a defence by a sex worker’