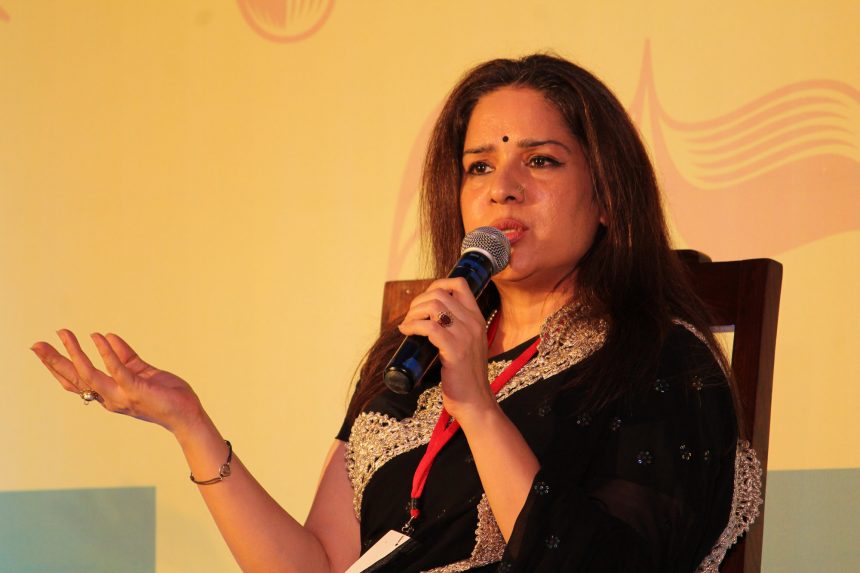 The enlightening talk given by Manjari Chaturvedi covered the works of her initiative, Courtesan Project. The motto of her project, to acknowledge the ‘Tawaifs’ (female performers at the kings’ courts) as she states in Urdu “unko unki wajood de” was well justified.

We would find around 1000 male ghazal artists dated back to a century on the internet but barely a woman ghazal performer’s name. Manjari feels this is due to the lens of gender by which we have seen an art form through centuries. She narrated a story of an artist, Zareena Begum who worked under a pension scheme from her foundation. This woman who wished to sing on the stage in a banarasi saree wasn’t sponsored for her shows since she was labelled a Tawaif or a prostitute by the society.

Speaking about the North Indian traditional art forms, she strongly feels that these women so-called prostitutes were the ones who kept art forms such as Kathak, Ghazal and Thumri alive.

The reason women performers aren’t documented in our history is due to the patriarchal system. The creator of Sufi Kathak, Manjari took an example of Birju Maharaj, a well known dancer at the court of Wajed Ali Shah and Malka Jaan a female performer at the king’s court whose name isn’t found anywhere in history.

She broke the stereotype of a tawaif’s attire. Their outfits show nothing but their faces, wrists and feet as opposed to the idea of tight cleavage showing outfits with bosom heaving dance moves. This prejudice is amplified by Bollywood that feeds us with this wrong image of a Tawaif or a Baiji.

She mentioned through an example of the All India Radio where female performers were allowed only through the backdoor. But these women were commercially viable for them.

“You’ve taken their art, their attire but snatched their identity by labelling them as characterless hence refusing to acknowledge them,” she states. The contributions of these women to the art forms can only be brought through oral narratives which could be difficult but can be made possible through thoughtful projects such as this one.