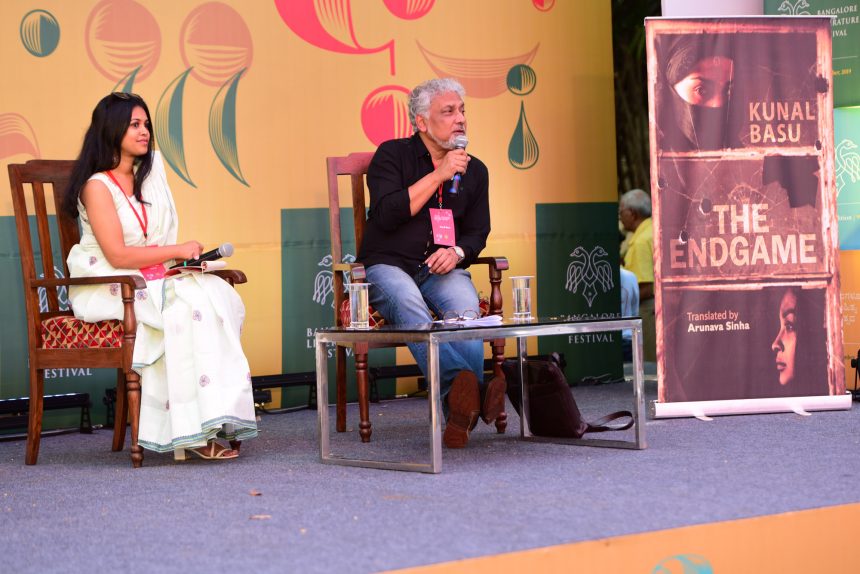 The Yayati stage arena at the Bangalore Literature Festival’19 witnessed a remarkable burst of energy amongst the audience at 12.45 PM as Kunal Basu took over the stage. Kunal, the author of critically acclaimed novels such as – The Opium Clerk, Kalkatta, etc. was accompanied by Teesta Guha Sarkar, the Senior Commissioning Editor at Pan Macmillan India. The session basically revolved around familiarizing the audience with Kunal’s upcoming novel- ‘The Endgame’ which releases this December while Teesta moderated the session.

The Endgame is Kunal’s first novel to be translated from Bangla (originally Tejaswini O Shabnam) to English. However, he did not take up the translation work of his novel. He further went on to narrate how The Endgame as a novel took shape. It started off 2 years back when a Bollywood producer approached Kunal to do a story on the notion of trafficking which he, in turn, wanted to turn into a film. Even though the anguish and rampant about trafficking kept him miles away from writing about it, a small voice from within seemed to call out to him to explore the unexplored. He agreed upon writing such a novel with a word from the producers to get in touch with the trafficking victims from the villages and the traffickers. He narrated how a visit to an NGO that was arranged for him completely changed his take on the entire subject. Prepared with his “toolkit of a writer” he entered a derelict shed where 11 little girls between the age of 14-18 years waited for his questions. “I broke down”- said Kunal. As a result, his gaze into those 11 pairs of eyes melted together to become a character called ‘Shabnam’.

His novel, The Endgame revolves around the tale of two girls- one raised in India and another in New York who ends up meeting in the battlefields of Iraq. Kunal explains his reasons for locating the novel in the context of the conflict by stating that he wanted to see the subterranean connection- war over women’s bodies fought in our country. “Wars never end”, said he.

The 63 years old writer says that he belongs to a bilingual tribe and in spite of being a bilingual writer he kept aloof from translating this novel on his own because he believes going back to translate his own work from Bangla to English is a tedious affair. On his distinctness of style, he expresses his views on making his story the hero of his novel. Coming off the land of Ramayana and Mahabharata, story making he said is fundamental to his outpost. He addressed the audience in this regard by telling them how he needs to think of “a story that would keep people awake at night”. “The writers do not seem to understand the readers’ thirst for stories”, he added.

The session ended with him reading out a portion from the manuscript of ‘The Endgame’ and several questions from the audience to which he responded with his need to engage with imagery to bring a story to life, valuable advice to read a lot and write a lot without restricting oneself to any one particular genre, about how writing a novel changes the writer as it changes the readers. He concluded with another significant advice to budding writers – “Research to fertilise your imagination. Not detailing. Imagination will do the detailing.