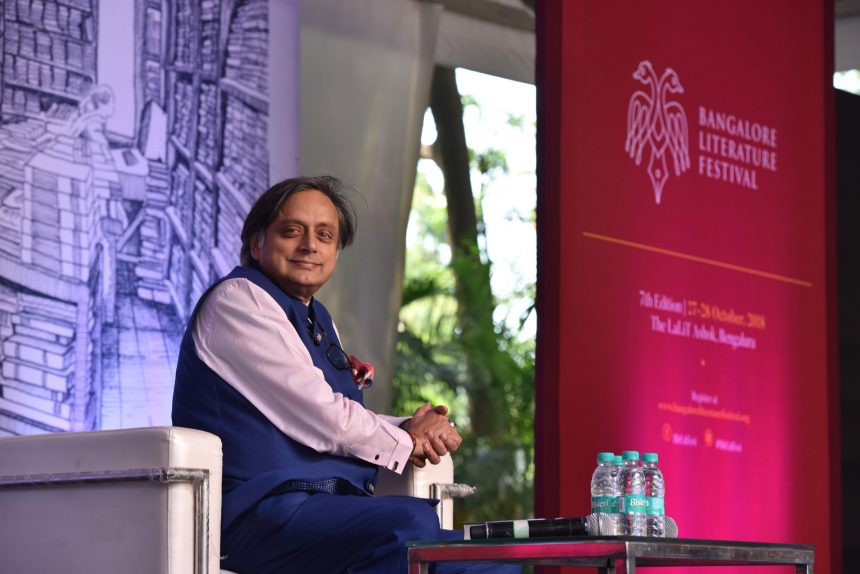 This event comes in the backdrop of the launch of Shashi Tharoor’s new book called The Paradoxical Prime Minister. If you ask why should you read a book by an opposition leader for the current regime, then understand that as Shashi Tharoor calls himself as the one with 30 years of paper trail and certainly a good analysis for it comes after four and a half years of Modi’s rule. Tharoor starts from the beginning of 2014 when Modi came into power and says that initially, he welcomed the current prime minister for he showed a lot of potential for inclusivity with his speeches. He supported him so much so that people accused of him being sold out but he gave two reasons for his initial support to Modi. First, he respected the electorate and the votes of the people and second, with his speeches Modi had created a long yardstick in Tharoor’s mind but he soon got disenchanted. He remembers six months into Modi’s regime, a Muslim techie in Pune got killed by the Hindu extremists and since Tharoor was the spokesperson of Congress at that time, he asked many questions but all they got was dead silence. And that’s when he realised that Modi is resting on the most illiberal elements of Indian society.

Talking about his new book, Tharoor says that there are five sections of his book. The first section is about the profile of Narendra Modi where Tharoor has tried to give an honest account of his life but he is also honest to say that all his sources are secondary but it trails down his entire life from childhood till now.

The second section talks about “Modi” fication of India and the regime. It covers mob lynchings and cow vigilantism. It also talks about Modi’s ‘minimum government and maximum governance’. Shashi Tharoor says that according to the present Home ministry’s statistics the amount of money which the BJP has claimed to own is unprecedented. It also gets scary for it is the amount which is showed and there are questions to be raised. Calling the present regime “the worst of both worlds”, Tharoor says that Modi is running a presidential form of government in a parliamentary setup.

The third section is a fairly serious analysis of hollowing out of institutions like the CBI, the Supreme Court, the CAG, Information commission and finally the RTI. He says there are thousands of RTI applications which remains unresponded and unanswered, as similar to the silence of the lamb.

The fourth section of the book is “Modi”nomics where he covers the disasters of demonetisation and how it was not discussed with the cabinet and the RBI had no option but to follow him. Then a good scheme like GST which was executed so badly that it created more problems than solving it. Finally, a study of the budgets is also present in the section.

The fifth section which according to the Tharoor is the most disappointing part of the Modi regime is about Modi’s dealing with the foreign policies. While acknowledging that Modi has travelled around the world with an enormous energy and has also blown the winds of soft power with an excellent masterstroke of Yoga Day, establishing the culture of India in the global context, there is also the threatening of countries smaller than ours like Maldives and Srilanka and the failing relationship with Nepal. Indo- Pakistan relationship would be a whole new story. Tharoor went on to criticise Modi’s way of dealing with Pathankot attack and how decisions were taken without consulting anyone in the council.He called it ‘whimsical’ in the most Tharoorian way possible. This made him question if Modi has a foreign policy at all.

Admitting that he can’t pretend to be neutral but he has tried to be fair where he has appreciated Modi with his workaholic nature but he cautions this work may not have any direction. Also, he coined a term “Moditva” which is that he is from the Hindutva but has created a personality above it. His masculinity and 56 inches are not only from RSS but his individualised personality.

Lastly,talking about India,he calls it not a melting pot but a Thaali where different regions and communities have tried to put their elements so that one can have a balanced diet but all Modi and his party is doing is to colour the Thaali and eliminate certain parts of it to make it a very bland khichdi. If one thing that can be strongly extracted from this politically charged session is that Tharoor has a great skill when it comes to words, he can play with them and twist them in ways impossible to think.

About the Author: Kalpita is a Bachelor in English Literature. Her ultimate goal is to fulfill the romantic notion of changing the world for better and she is pursuing MA in Development from Azim Premji University, Bangalore. She currently writes for Bookstalkist.