The Snake and the Lotus: On Graphic Novels 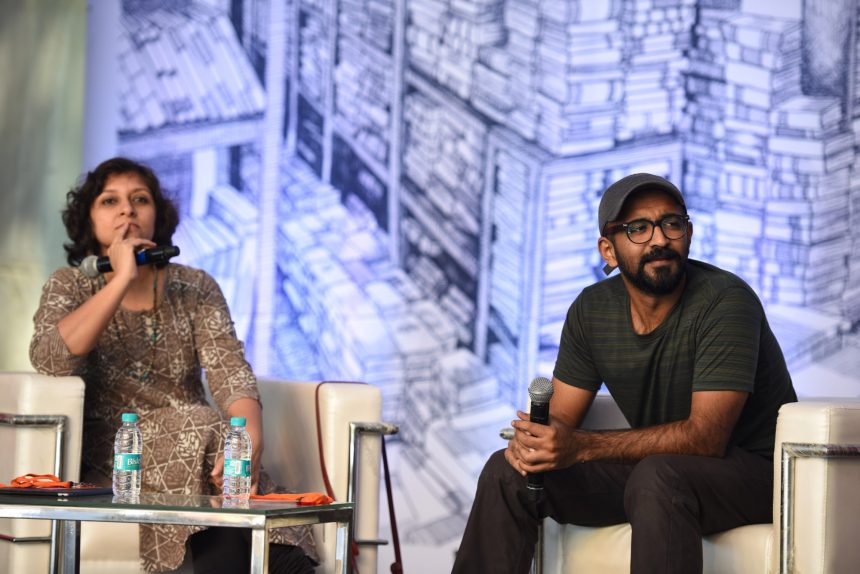 Human excesses, overdependence on machines, a dark vivid world in an alternate time, place, and universe, an uninhibited glimpse into what our futures can look like.

This is the world of Halahala, created by a Bangalore based visual graphic artist, Appupen, a.k.a. George Mathen. Halahala is a world created over a decade, which deeply derives itself from all things human, Indian and current. It takes us through a journey of dark imagery which depicts a fantasy world. This fantasy world keeps you hooked not because of its fantastical creatures and story archetypes. Instead, its innate relatability, grey characters and humour are its heroes. Or as Appupen says, “The story should be the only hero.”

When in conversation with Appupen and VK Karthika, the dialogue explored the birth of Halahala, the medium of graphic art, how superheroes are perceived in the Indian context and the trap of political cartoons.

Halahala was born out of a need for storytelling for the adult youth. With fast-paced action movies, keeping a reader hooked on to vivid visuals was a good way to explore their acceptability. What started as modest updates of a web cartoon, soon translated into the first exploration of Halahala in the Moonward, 2009.

Three books later, we see a new side of this ever-changing planet in the “Snake and the Lotus, 2018”. The plot focuses on a futuristic lotus shaped city with humans living on its fringes and surviving on lotus milk made out of artificial lotuses, the supply of which is controlled by the city itself.
The wacky story plot caters to both science fiction lovers as well as fans of dystopian fiction. The book is a journey which the author takes the reader along on, as a mysterious hero battles the structure of society and questions predefined thoughts.

Appupen’s mysterious heroes aim to follow a different path from the quintessential superheroes of idealism, like Superman or Captain America. In his, opinion, these American superheroes were instrumental in creating a common base of ideas and patriotism. India already had these idealistic role models created through centuries of mythology. We can’t aim to recreate the Western superhero culture. It will only be rivalled by the Rashtra Bhakti that is so deeply rooted in every Indian. Hence his heroes need to be grey characters, more suitably armed to understand and dismantle dystopian societies.

A characteristic feature that helps his novels float above its competitors is the minimalistic usage of words. Sometimes his novels have gone silent altogether! When asked why, he simply answered,” The graphics are a guide to the reader.” The usage of words is completely defined by the idea that needs to be communicated. While a new concept being introduced requires words to explain it to the reader, those visuals which draw one’s personal experiences do not. They tend to narrate a more personalised story, with the images just guiding and keeping you on the story track. He calls it an ‘easy way out’ for him. But, it seems more like a way out, that frees the imagination of not only the creator but the reader as well.

With RashtraMan being his most popular character, he offers political satire online in the Indian context. But he also doesn’t fail to warn creators from falling into the trap of political cartoons. While political cartoons may help catch eyeballs, they seldom allow you to look at other aspects of humanity. The constant cycle of cynicism and political commentary takes away a graphic artist’s freedom from exploring new avenues of interest.

The session left the readers with an appreciation for an unconventional medium of art, and me personally excited to visit Halahala.

About the author: Deepika Aiyer, is an avid reader, crazy kdrama fan and loves to explore the What ifs of the world in her spare time.She currently writes for Bookstalkist