The Story of My Captivity, Survival and Freedom – Hamid Ansari and Geeta Mohan with Chandan Gowda 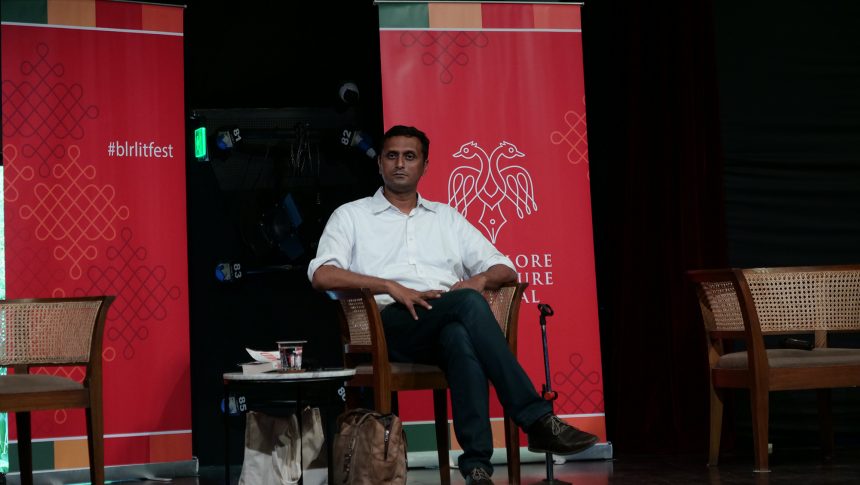 Chandan Gowda is a professor at Azim Premji University and moderated the session. Geeta Mohan is a foreign affairs editor at India Today TV Network and covers international relations and diplomacy. She met with Hamid Ansari at his house’s basement, to work on the book- The Story of My Captivity, Survival and Freedom. Hamid Ansari has previously worked with the Rotary club and has volunteered at the UN. He is presently a visiting faculty at a Mumbai college and is a motivational speaker.

Hamid Ansari had gone to Pakistan to help out a young girl who was struggling to live in a conservative household. The two had met online and Fiza had revealed to Hamid about her painful life. She had begun to see suicide as her only option to get out of her tragic life and Hamid upon realising this wanted to help her out. After reaching out to various NGOs, he decided to go to Pakistan and help her out in person. It is when he reached Pakistan, that his life completely changed. The Pakistani guards suspected him as an Indian spy and put him in solitary confinement at Peshawar. He was at that solitary confinement for six whole years and later was shifted to civil jail. A long and hard battle was fought for him by his mother, and it was because of her efforts, and a few others that he could return back to India. The book was written when Hamid’s case was brought to light, and Hamid’s lawyers had asked him to start journaling his experience at the Pakistani holding.

When Hamid came to India, he was taken aback by the efforts taken by people back at home. He realised that his capture was only half of the story. There was another narrative critical to the story- that of his mother and Zeenat, who went to great lengths to bring him back. Pakistani officials denied Hamid’s capture and his existence on the Pakistani soil. It was his mother’s relentless efforts to keep finding a way out of this horrific mess that had saved his life.

Geeta talked about how establishing the construct of the book was a tough job. The story would not strike someone if it had not been written in first person. Reader’s needed to know how each individual was involved in bringing Hamid Ansari back.

Hamid Ansari’s life in the solitary confinement facilities in Pakistan brought up a lot of discussions. Hamid explained what his life was like in the cell. For six years, he was alone and without any communication. Hamid attributed the divine power and faith in God to his motivation to keep him going. Every time he prayed, Hamid coincidentally received answers from the officials. His case took more and more shape as he prayed. It was his faith, Hamid said, that helped him stay alive. Writing the book was difficult for him because it constantly brought back repressed memories of his mental health in the holding. He started to fight back with the Pakistani officials, when they told him that his words hurt their sentiments.

Geeta was very happy with how their book was received. Answering to Chandan Gowda, she described how the book wasn’t really received in Pakistan unless a journalist has taken it there from India. Journalists who’ve read the book have remarked how it was very nuanced in how Hamid’s case was handled. It also reflected India and Pakistan’s relationship. Even when Hamid faced tremendous torturous situations, in the book, he is very humble about his interactions with Pakistani civilians. People have cried reading the book, which meant that it touched them. This, Hamid thought, was the mark of a successful narrative.

About the Author: Anusha is a final year undergraduate student pursuing English (Hons.) at Christ University. She can usually be found expressing her thoughts in the genres of social concerns and satires, often accompanied with a cup of chai. She currently writes for TheSeer.