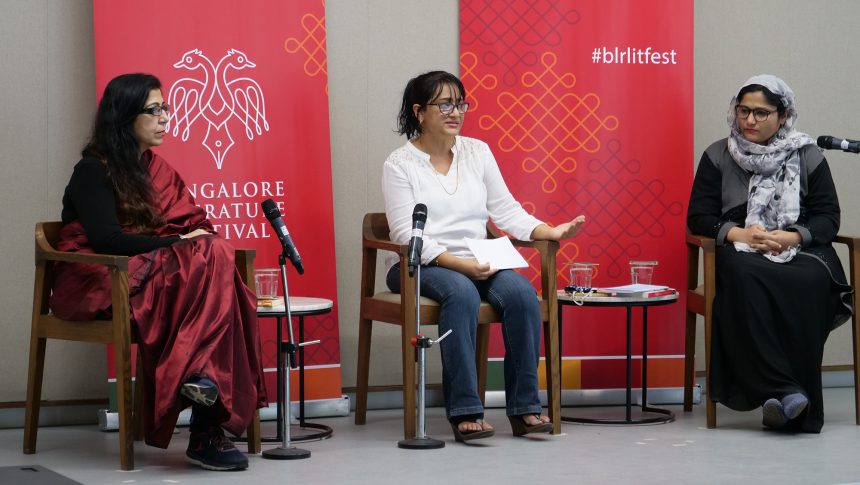 The Day-2 evening session had a discussion on girls as primary characters in books and what it takes from writers to create such stories. The panel had Andaleeb Wajid and Milan Vohra in conversation with Krishna Manavalli. The session reflected the journey of women’s evolution in all the fields. Women aren’t just confined to stay between four walls; they are capable and succeed in every work they take up. Though we are in the 21st century, the discrimination between a man and a woman continues. The session included narratives around these ideas.

The session started with Krishna quoting “Behind every successful man is a woman”. The evolution of the female hero in Indian writing being the main talking point for this discussion, Krishna said that from the times of Draupadi to Kamala Das from the earlier generation, we had fierce and bold women. Also, she pointed out the differences between the lives of women then and now.

Andaleeb Wajid is the author of 26 published novels and she writes across different genres such as romance, young adult, and horror. Milan Vohra is best known as India’s first Mills & Boon author. Her first book ‘The Love Asana’ was an international bestseller. These two women have inspired many other women out there to break the norms and superstitious beliefs through their empowering writing.

The two authors were asked to talk about the evolution of women in their books and share their experiences on the writer’s life they have chosen. Milan Vohra said we evolve as much as the women we write about. She stepped into writing accidentally and one of her works made her win a competition, that was how she started writing characters that reflected the reality. Writing is a form of expression to me and what I wrote was felt by my characters and my feelings were conveyed to the world through books, said Andaleeb Wajid. The common point in both these authors’ writing was women evolving story by story.

Krishna asked the two authors on whom do they look up to as the model to build inspiring female characters in their books? According to Milan, she does not write with a model in mind, she writes the story that she believes in and which is relatable. Andaleeb builds empowering female protagonists by looking into society and the normal way of women’s lifestyle. The session was then followed by the narrations from the works of respective authors. After the narration, the authors gave a quick brief on the plot they read.

When asked about setting a male hero or a billionaire in a story to engage the plot, Milan said she always sets the protagonists equally as both men and women are an important part of society and one can’t do without another. On the other hand, Andaleeb said there is nothing to do with the hero and she preferably opts for a relatable protagonist. Also, the status doesn’t attract the plot, said Andaleeb. The authors also shared their opinions on other characters from other books.

About the Author: Bhuvanashree Manjunath is a freelance writer and a poet, currently pursuing Civil Engineering in Bengaluru. Being an avid reader and book lover, she enjoys working as a Book Reviewer. Apart from literature, her fields of interest include painting, photography, music and teaching. She finds solace in writing poems and blogs. She currently writes for TheSeer.