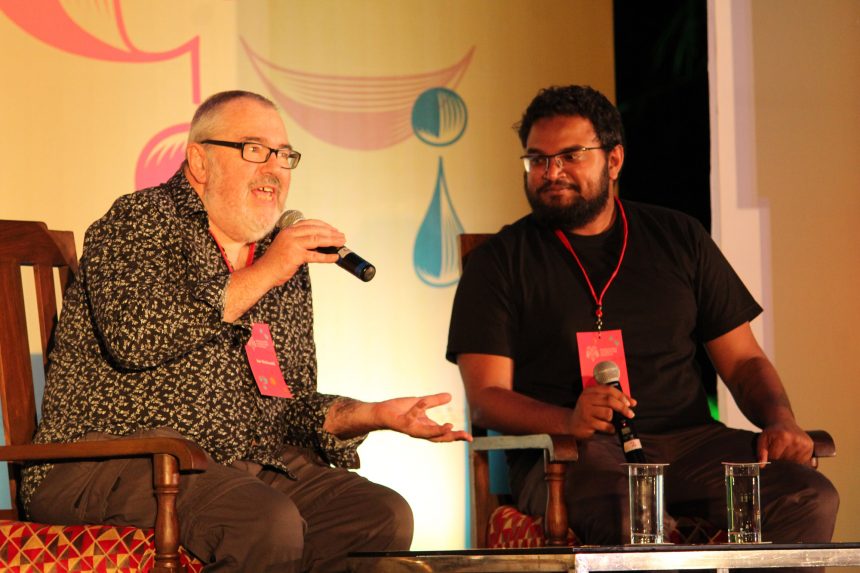 Ian MacDonald, a British science-fiction novelist who won BSFA award for his book River of Gods which is set in mid 21st century India, was talking about Trends and technologies shaping our tomorrow.

Ian’s book themes include nanotechnology, post-cyberpunk settings, and the impact of rapid social and technological change on non-Western societies, and the topic of the session could not be apter.

When asked by the moderator Yudhanjaya Wijeratne is manipulation of the general public through social media dystopia coming true, he replied by saying “yes it is”, and went on to mention that how scary it was that seventy-five per cent of people in the UK were using Facebook to consume news. He also suggested some measures to contain the negative effects of social media. He said that shutting down Facebook or any other social media giant was not a solution but they need to accommodate changes to minimize the negative effects of the social media platforms.

When the moderator asked about his thoughts on urbanization, he said whenever there is development there are bound to be adverse effects along with the opportunities but there need to be proper planning and execution and people responsible need to be held accountable. He mentioned how cars were one of the worst effect drivers of urbanization.

While talking about the development he suggested that authorities should involve local communities in the process and also mentioned how in Afghanistan a local community built their own WiFi network.