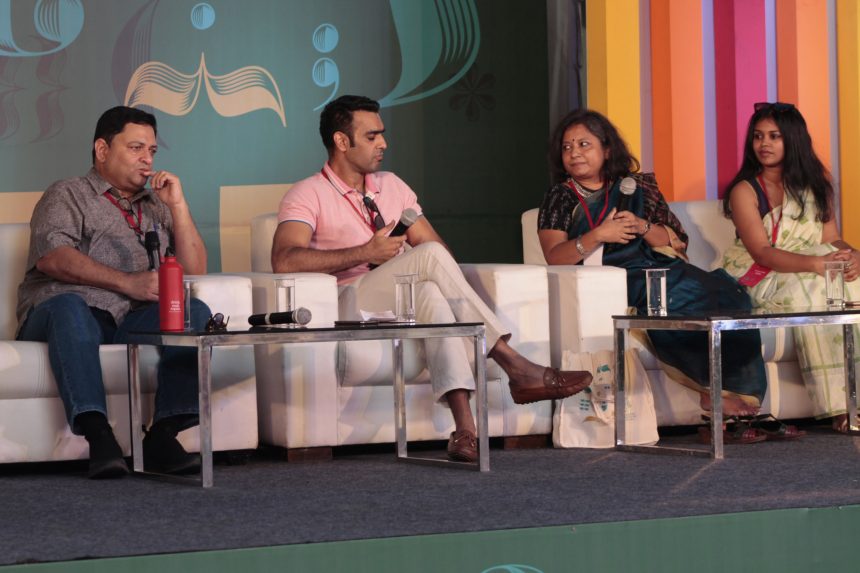 The afternoon session commenced at the Tughlaq stage with Ravinder Singh, an Indian author and a software engineer. Ravinder is a best-selling writer in romantic genre from the state Odisha, with eight successful novels to his name and a publishing house named ‘Black Ink’, which promotes aspiring writers.

He headed the panel discussion that included Teesta Guha Sarkar, a senior commissioning editor at ‘Pan MacMillan India’.  The other two panellists were Himanjali Sarkar, currently an editor with ‘Bloomsbury India’ and Udayan Mitra, a publisher at ‘Penguin group of India’.

Ravinder was excited to be on the other side of the table, asking questions rather than answering. He started the discourse with the statement, “Art of publishing is like a black box”. For the readers, it is all about the end product, the book or the novel, but there is a lot happening behind the curtains. The discussion was engaging with two contemporary Bengali people on either ends of the panel contradicting on various aspects of writing. Himanjali claimed that while currently in India the number of readers are at peak, but judging by extreme population, there is still a room for enhancement. Udayan enlightened the listeners about the print run scenario in India which has grown over the years from 1,000 to 3,000.

Teesta advocated the fact that works of literature may be of high merit to some publishers and of none to some others. The panelists discussed and dwelled upon the aspect of good writing and what actually defines a good write-up. There were a lot of viewpoints about the importance of language and literature in publishing. There were also talks, arguments, and suggestive measures for debut author and aspiring literati.

The author function was well elaborated and guidelines were provided to experiment with different genres and fusing various aspects of literature. An extensive argument was established in favour of Indian authors who have been attempting different genres. Some genres have been totally untouched like the horror and the gothic fiction. The panel also discussed the rise and fall of e-reading. Himanjali touched upon the physical literature aspect. Ravinder spoke about the dynamics of audio-visual format of literature which is now enjoying a fair share of appreciation from the Indian audience.

Towards the end, the panelists also portrayed their significant worry towards the peculiar aspect of readers who tend to love western crime stories but are disinterested in reading Indian versions of crime coverage. They closed by drawing parallels to visual media in India which adores crime stories like “Mirzapur” and “Sacred Games”. They defined the guidelines for a good novel for debutants and had a hearty discussion on the questions put forward by the audience.