Whose Side are You On? - BLF 2017 Reports - Bangalore Literature Festival (BLF)

Whose Side are You On? 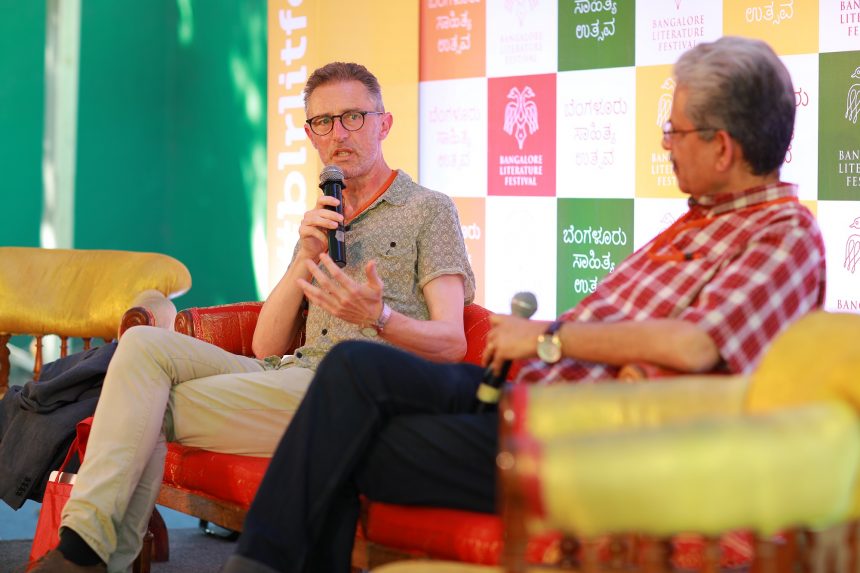 Two of the most prominent sports writers and columnists sat to deliberate on the ever-changing landscape of the game of cricket. As T20s shatter all records of sports viewership and fandom and the International cricket based on the idea of nation loyalties paves way for the domestic leagues of T20s, Gideon Haigh and Suresh Menon discussed the significance of modern cricket dynamics and the future of fandom in the session titled ‘Whose side are you on?’.

When Suresh initiated the discussion with a question on how or why does one support a team, Gideon remarked that the process had become much more complex than it had been earlier. While a few years back, your national team was an obvious choice, in the current age of instantaneous teams and spontaneous fanbase, the process has become more volatile. Referring to a conversation with his friend who is a Chennai Super Kings fan, Gideon told the audience that he was amazed to see that for the 2 years that the CSK was out of action, his friend was just waiting for his team to come back instead of switching his loyalties.

Gideon added that owing to its origins, cricket had an air of gentility and idyllic aspect. It remained untouched by industrialization. However, if one looks at the present situation, Lalit Modi saw that cricket could further evolve to a city level loyalty in addition to the nation or province based ones that we already had.

Suresh remarked that in the times he had started his career, there was a thriving league based following and they were aware of a lot of cricketers which was no longer the case. Gideon blamed the media that is elitist and keeps covering the stars of the game. He also observed that fans too are switching players based loyalty as they move to different teams in IPL like tournaments. Talking of fans, Gideon spoke about a hybrid kind of fan-base of the Big Bash League of Australia that doesn’t hold any allegiance to any team or the game but loves to watch the game on television.

One question that would perhaps never escape such a session is the relevance of Test matches in light of the growing popularity. When Suresh brought up the subject, Gideon mentioned that the Ashes and the Big Bash leagues have their schedules in conflict this time and it would be interesting to see what the fans choose. While the kids belong to the T20 generation, it would be interesting to see if the parents will choose Ashes over the BBL. In the probable absence of Ben Stokes, if the Ashes has a few lacklustre beginning days, things might only get uphill from there. However, when probed by Suresh if it was a bad thing, after all, Gideon quoted Shashi Tharoor who wrote welcoming the domestic T20s that it had eliminated partisanship and chauvinism from the game and it was good to see players of India and Pakistan playing in the same game. However, Gideon didn’t fail to mention that even for the T20s, there is a desire to create nationalistic underpinnings and a latent sense of jingoism does exist.

Though the session ran for only 30 minutes, Gideon and Suresh managed to discuss a wide range of subjects including how all sports were moving into the direction of Formula 1 where companies, investors, manufacturers, and broadcasters would become supreme and cricket probably will be the last thing on anyone’s mind. Gideon while answering Menon’s question on the fan’s response to defeats in T20s said that it was the case with players too. In his interviews with about 20-25 cricketers in Australia, Gideon understood that the losses of the T20 leagues had no major impact on the mental frame of the players and while T20s give great credit for success, there is no great blame for failure. This has also put players in charge of their own career where they can hone their skills suited to a particular format.

Should Tests give way to T20s or should youngsters support tests? The answer took a personal turn here and Gideon explained that T20s had a problem of memorability, Tests have their own way of making a place in your mind. “Tests are the deepest memories of cricket that we can have. A stable base of cricket devotees not only consumes but also contributes. Cricket must have something spiritual and aesthetic about it”, Gideon had reserved his last words for Test cricket.