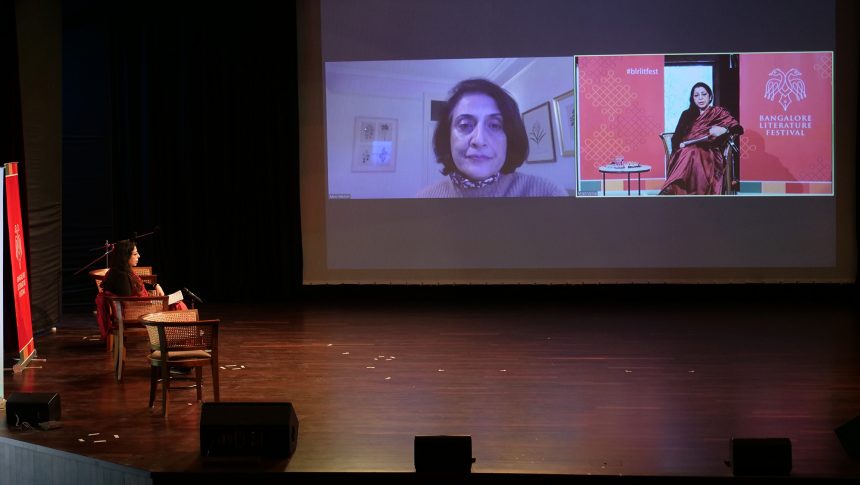 This Day 2 session between the two authors was filled with lighter moments and narratives. Moni Mohsin, one of the wittiest Pakistani writers, currently in London, joined remotely. Milan Vohra, known as India’s first Mills & Boon author, was the moderator.

Milan asked Moni if there is a lot of pressure to be funny in real life? Moni confessed that sometimes there is. She quoted a funny incidence and said that she does disappoint people some time and is taken aback too with their candour.

Milan asked about her journey from the early writings of the satirical column “The Diary of a Social Butterfly” in The Friday times to the book by the same name. Moni explained that earlier the column was her own journey. Later she wanted to write about women’s issues on a lighter note. Her inspiration came by another daily life instance when she heard two women talking. That was how the butterfly was born.

Moni then narrated a piece she had written recently regarding the second spite of COVID. This was about a woman who is stuck at home and goes on with a monologue. The way Moni narrated the entire piece was hysterical and fun to hear.

Milan asked if Moni’s humour affects her real-life relationships. Moni said that it does not. She also confirmed that most people do not place themselves in her satire.

The next question was if westerners identify with the characters in Moni’s book. To this Moni said that while the language and cadences are specific to India and Pakistan, the overall essence of the butterfly character is universal. Her publisher’s view is that living in a bubble of entitlement and privileged is the theme of the butterfly. One finds butterflies in all parts of the world where there are inequality and injustice.

Milan also raised her doubts on the difficulties of using humour in written words without phonetics. But in Moni’s writing, they are enunciated very beautifully. Moni said that her inspiration is fellow Lahoris and Indians she even now meets in London. She spoke about how her mind records everything she observes and sees around.

Milan’s next question was on how Moni knows if her readers will get it since satire is one of the toughest genres. Moni confessed that sometimes writing satire is difficult as readers don’t get it. She quoted Animal farm as an example.

She said that it was an easy journey to convert it into a book, as she already had characters, the plot, the world they operated in, so finding a story was not difficult.

Milan’s next set of questions were on did being an outsider help? Did it juxtapose bringing insider view of the character? Moni confirmed that in contrast, it gave a greater perspective when one is removed from a situation.”It emboldens and permeates your own consciousness enabling you to write with free stance.”

When asked on how does Moni balance the zoomed-in and out perspective, she confessed that she herself is the butterfly. This brought some laughter. She went on explaining that she is an outsider because she is sitting outside. But an insider because she was born and brought up in that class. The class where everyone is worried about their image and appearances.  She tries to bring all of that in the butterfly. She can access their interiorities and see them from outside

Milan asked if it is a struggle to explain too much to westerners sometimes. Moni agreed on this aspect. She elaborated that westerners mostly want books on deeper topics about terrorism, war etc. from our subcontinents. They do not want humour. She also said that to carry this responsibility of explaining your society is huge and difficult.

Milan then asked if satire could be non-political. Moni’s views on this were that while there is a social satire, she thought everything in life is political in nature, whether with the capital ‘P’ or not.

Milna also questioned Moni’s view on satire involving betrayal. To this Moni explained that to write satire successfully, one must expose hypocrisy or injustice or something that you know of and that comes from a place of your close experience. In that way, one betrays one’s circle. But most authors write composite characters that are not recognizable. Moni also said that most successful satires are cruel. She quoted an example of her favourite book “Handful of dust”.

Milan then asked about differences in satire, sarcasm, and parody. Moni explained that sarcasm is a cheap shot. It does not require imaginative feat. Parody is a take on book or film. Milan asked about the new book ‘The Impeccable Integrity of Ruby R’. Moni said the new book was a racy mix of love and politics.

The session ended on a lighter note with Moni mimicking while answering Milan’s lighter questions.