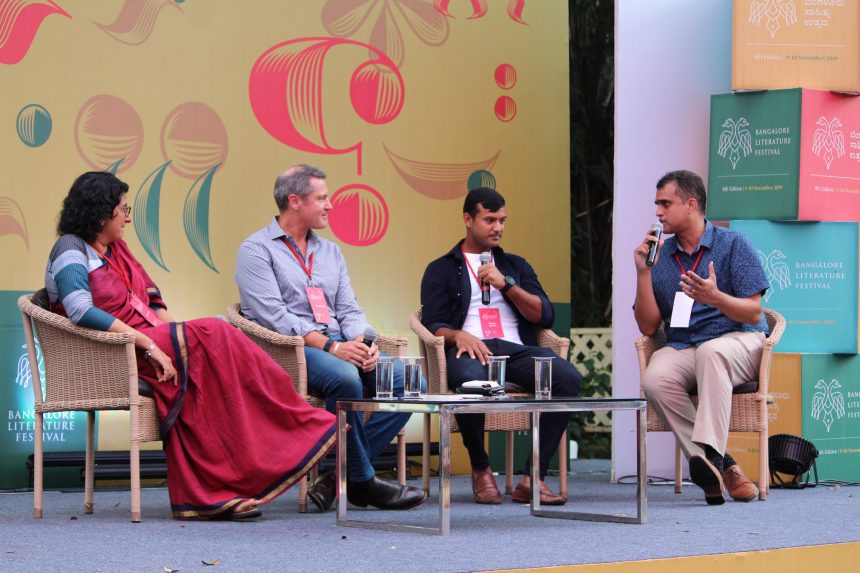 One of the much awaited sessions of the Bangalore Literature Festival titled ‘Writing Sport’, began with an interesting and hilarious joke by Nandan Kamath. He said “a journalist, an umpire, and a cricketer walk into a bar and end up at the Bangalore Literature Festival because it was a dry day” which garnered jovial admiration from the crowd as an ice breaker for a session that was filled with mixed emotions and a constant ebb and flow of seriousness throughout.

It was widely accepted by the panel that sports is a great medium to teach lessons to masses and how sports writing or sports journalism is an important factor in the consumption of media by the populous. The creation of a wing dedicated to sports was extensively spoken about by Sharda Ugra, a sports journalist who spoke about the journey one has to make in order to establish themselves in the field of sports journalism. This journey begins with a flashback to 1983, when India lifted its first cricket World Cup, which interested Sharda into the field of sports writing, as she claimed her ability to play cricket was “rubbish”. She also recalled the situation during the 80s where the concept of journalism was the only option for people attaining degrees in arts, therefore this becoming an inevitable destiny that she has reached.

The conversation briefly moved to Simon Taufel, who spoke about his unexpected journey as an umpire in cricket, which began with his attending a course on umpiring in which he passed and the friend that he went with had failed to do the same. From off the field to someone who performs on the field, the question about balancing cricket and studies was posed to Mayank Agarwal, to which he replied that he’d miss a lot of classes in order to play cricket and that the only reason he had passed ultimately is because he played cricket professionally. When questioned about the circumstances around which Mayank had to adapt himself and accept the decisions, he said that he had to attain a stronger will power and agree that things don’t always go the way someone wants and that one needs to be okay with that.

Speaking of the technological advancements as a boon and a bane, the different perspectives that one has is what was reiterated upon by the panel. Simon interestingly said that “we take a simple game and make it complicated” and that instead of making it a problem, we must embrace it and let it be beneficial for the sport which entirely depends on the perspective one has and this is acquired through experience. Simon recalls the terror attack on the Sri Lankan bus in Pakistan and how he had survived it and that provided a different outlook about life which, in a nutshell, he says “cricket is not everything.” When asked about the state of mind that Mayank Agarwal was in when he wasn’t performing to the expectations of everyone, he spoke openly about the disregard of such expectations and the sheer confidence and dedication he had towards the betterment of his game through practice.

Sharda spoke about the idiosyncrasies that one needs to notice in a piece of news which is openly available in order to provide unique reports and perspectives and how one needs to slowly let go of their fan following towards a specific team in a sport in order to provide unbiased news. The talk consisted of a variety of concepts that were covered which were relevant in all aspects, especially in writing, as the mantra of believing and achieving was the note that the session ended on. This was followed by the launch of a book by Go India Sports! by Sharda and conferring the Wisden Almanack ‘Cricketer of the Year’ award on Mayank Agarwal.