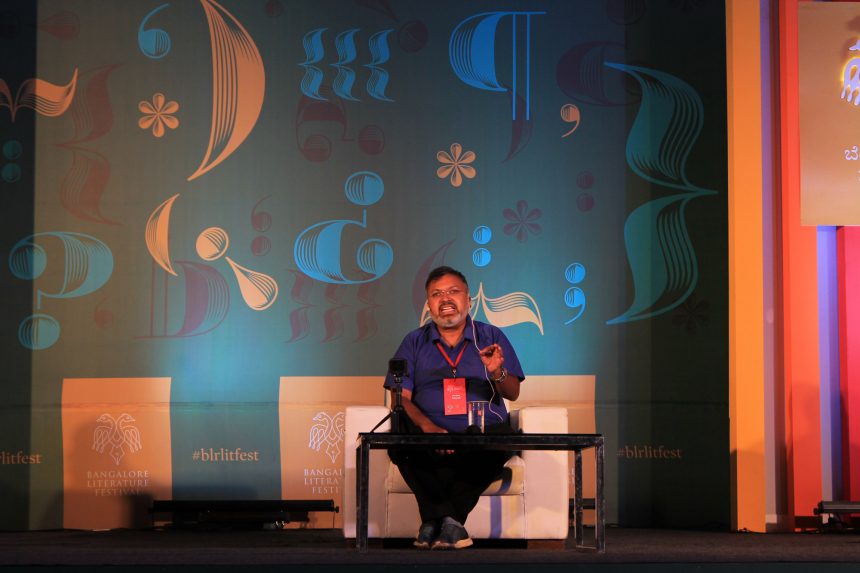 One of the most interesting sessions at the festival was a talk by Devdutt Pattanaik, at eight in the evening which was also the concluding session. A mythologist, speaker, illustrator and an author, Devdutt Pattanaik enchanted the audience with his charismatic personality. As simple as he looks, the theories he spoke of were complex and transcendental in nature.

He began the session by narrating a story of a sadhu to a bespelled audience. The setting of the story is Mount Kailash, which is a snow-covered mountain with no human inhabitation. The protagonist of the story is an ascetic, who is smeared in ash and requires nothing. Pattanaik then described how this man possesses an other-wordly calmness and has no hunger or desire for anything – this is an introduction to Shiva- the greatest of all gods.

Pattanaik conveyed the concepts of human desires and hunger, and its complexities in a simple manner. He said that if there is no hunger there is no desire. In his own words“yadi bhookh nahi hai, to lakshya bhi nahi hai.” He described the world as a bazaar or a marketplace where there is a commerce of give and take i.e. demand and supply. He also explained the distinction between animate and inanimate. The distinction, as he told, lies in presence and absence. Fetching examples from Mahabharata and Ramayana he narrated stories and made people reflect on complex theories.

Further elaborating on the story, he said that Shiva (Mahadev) wants nothing. The conflict in the story is that if someone doesn’t need anything, how can they be invited to yagyashala?  How can you invite the sadhu to a feast as he does not eat?

Devdutt Pattanaik expressed how when you understand yoga in a practical sense, you will outgrow feelings of hunger. Hunger, as he said, can signify anything from ambitions, power, wealth, health, or pleasure. He said that in the contemporary times hunger is celebrated and people are eager to acquire more and more even though they have the needful in abundance.

The author identified Yoga as a way to outgrow the pangs of hunger; it is a way to feel content with what we have and not seek more. He expressed his disappointment at how in India, people in the guise of yogis seem to be making million dollar businesses, which entirely refutes the idea of yogi.

Devdutt Pattanaik is such a dynamic personality that his great ideas conveyed in a short description. His knowledge of mythologies and his ability to relate it to the contemporary times, enhances our understanding of both the past as well as the present. It was a pleasure to listen to a man of great knowledge like him on a topic which helps us to connect to our roots.

Aditi Dua is a Masters student in English with Communication Studies who has a knack for aesthetics and poetry. Apart from being a literature enthusiast, she highly celebrates challenging ideologies and provide disputing ideas of death. Always available for a conversation over good coffee. She currently writes for TheSeer