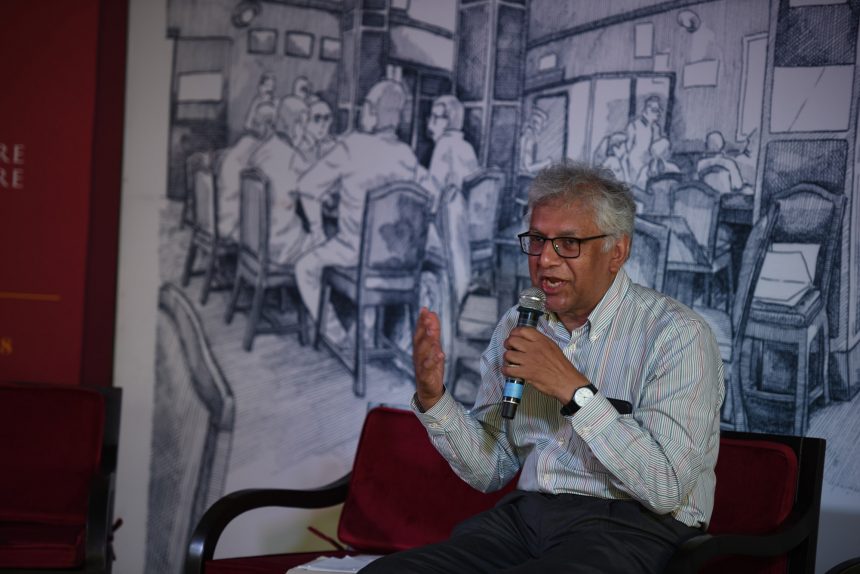 “I don’t dream about my parents when I’m in Bangalore”, Vijay quips. He often dreams about them in so many other places but seems to be at peace when in Bangalore. The Pulitzer Prize-winning poet, Vijay Seshadri mulled over the loss of his parents, and how grief turned into poetry. He caresses memories of his family’s move to the US, the melancholic look back into the death of his loved ones, and the magic of Bangalore. The session saw him go over three poems, all written within the triangle- his parents, heartache, and the life they lead.

The poems linger in the memories of his parents, their tightly woven relationship, thanks to the diasporic loneliness that made final goodbyes one of the toughest things to do. So many elegies later, when Vijay had to come to a hard stop, he penned down ‘The City of Grief’. The poem is a large echo of being solitary, and the feeling of emptiness from the stillness of life post his father’s death. The frustration of being unable to move on, coupled with the lack of significance in anything in the outside world is also rather clear.

Vijay moves on to two other poems on his parents, one of which looked back into the time when his father was transitioning from one phase to another; when the family moved from India to Canada, and then to the USA, triggered by the serendipity of Bangalore’s modernity that Vijay witnessed decades later. ‘Collins Ferry Road’ is a reminder of times when his father pulled along, despite conflicting decisions and challenges.

The one on his mother was when she was still alive, refusing to let go even when death was near. Her determination, the strength to stay and linger comes through in ‘Your Living Eyes’. Vijay’s relationship with his parents is unbreakable, in pursuit of the forever. He attributes it to him taking care of them until the end, while his sister stayed away.

Vijay’s poetry brought out a sense of unfinished, incomplete conversation with his parents, and a need to have them stay for just a bit longer. His eloquence is one that resonates with the crowd, with many a nod at each sentence.

About the author: Shobhana Ramesh is a believer in the subtlety of magic in everyday living and seeks the same from the books she reads, and the poetry she writes. Immerses herself in music, literature, art, and looking out the window with some coffee. She curates her poetry, and occasional verses in her blog Thinking; inking. https://thinkstreaks.wordpress.com. She currently writes for Bookstalkist.