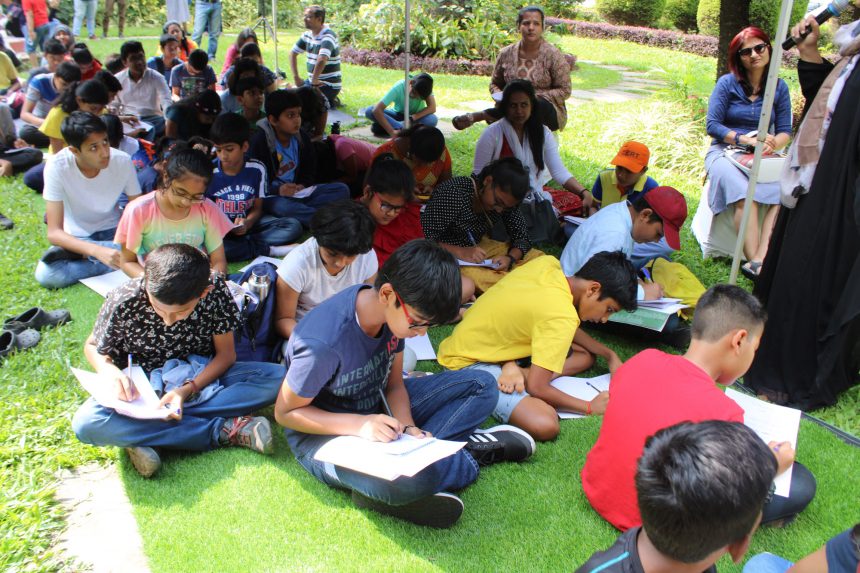 The youngest reporter and blogger on the team, Devaarsh Mehta attended a few of the CLF sessions for children in his age category (12+) at the Bangalore Literature Festival, Day 1. Keep reading to find his take on these sessions that are specially designed for children to have fun and also take home a lesson or two.

Bijal Vaccharajani has written ‘A Cloud Called Bhura’. Bijal is an environmentalist and has written many other books including ‘So You Want to Know About The Environment’.

She was funny and kind.

She asked us many questions and gave a quiz. We made paper planes, wrote letters, and had fun.

How to Write a Book in a Year | Balaji Venkatraman

Balaji Venkataraman spoke all about how to write a book in a year.

He has written books like Pops! and Flat-Track Bullies. Balaji read a few excerpts from his books and gave us six points –

Read for half an hour

Look at the fun side

Give it a title

He also did a few small experiments and gave rewards to those who answered the questions that he asked about the experiments.

Akhshay Gandhi did things a little differently. He did activities with us and told us that most stories start by letting yourself free. The ideas mustn’t be pushed out. They will come in their own. We played a few games and a sort of questionnaire with no wrong answers.

The Lizard of Oz | Khyrunnisa A

She is an animal lover and her book The Lizard of Oz has more than ten animals in different stories. She was really funny. The reason for the book is to show that insects aren’t that bad. She also uses many funny similes and metaphors.

Who Changed the Game? | Devika Cariapa

Devika Cariapa has written 25 Game Changers. She has written about the people who faced discrimination and yet went on to become some of the most famous people. The people who changed the tragic, underdeveloped India to the happy, developing one that we live in today. She gave us a trivia test. It was awesome.

Savio Mascarenhas’ session was a lot of fun. He taught us how to turn Tinkle comic characters into heroes and villains. He took our suggestions to make  Suppandi supervillain. We also learnt many things about comics.

He has written many good mythical stories. He was quite funny. He wrote a double book which is like a book which has two stories in it, one from front to back and the other from back to front. It was a lot of fun.

So Who Wants to be a Space Scientist? | Minnie Vaid

Minnie Vaid is a brilliant author who has written about women space scientists. She spoke about the Mangal Mission and Chandrayan. I loved it.

About the Author: Devaarsh Mehta is a certified bookworm, guitarist (almost), riddle maker, puzzle solver, and earth warrior with a huge collection of books in his personal library. He currently writes for TheSeer.