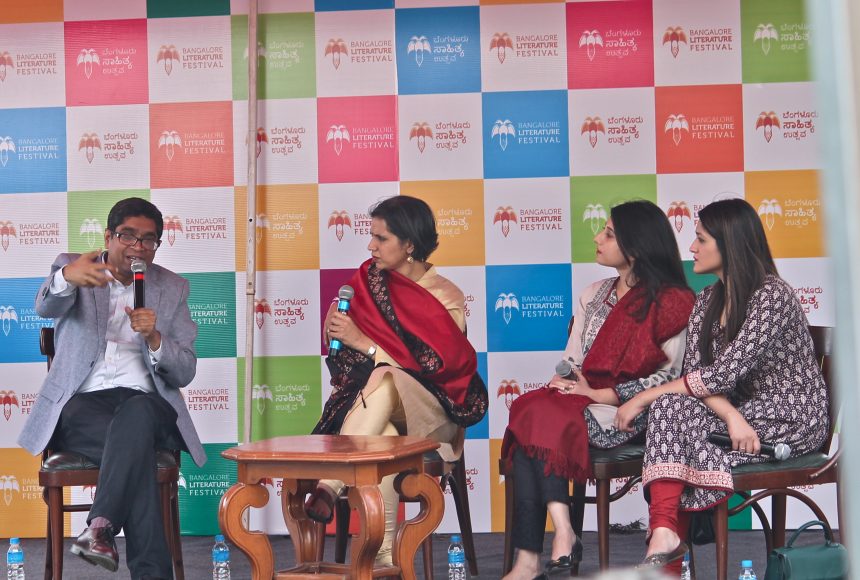 Partition is the defining moment for all the countries concerned. Many many years after the event, it still impacts the countries and its people greatly, especially where the relations between India and Pakistan is concerned – Kashmir is still called the unfinished business. But what should the focus really be on? The angst faced by those caught in the crossfire? Or the nostalgia that the witnesses and survivors still feel? This panel included individuals from both the nations, which helped the audience to look at the issue from perspectives of both the countries. The panel discussion started from history, moved on to the political perspective and ended with personal stories of people affected during partition.

Venkat Dhulipala, professor of history, and the author of ‘Creating a New Medina’, opened the session with the historical blame game that was played politically, before the partition became a reality, with focus on the Congress, Muslim League and the British government and the negotiation and transfer of powers between these bodies. While the man to blame is popularly proclaimed to be the father of the nation for Pakistan – Mohammad Ali Jinnah, the truth is that he never really wanted a Pakistan, he was using it as a bargaining counter for the Muslims’ rights and power.

A closer look at the survivors of partition, instead, would paint us a different story altogether. Apart from focusing on elite figures, it’s important to focus on the experiences and sufferings of those who were affected by the partition. As Dhulipala rightly points out, “Pakistan remains this vague idea. Nobody knows what it is. Millions of unsuspecting indians and Pakistanis face the brutal consequences of the decisions taken by those at the top.” We are an argumentative society. Everything gets talked about and thrashed about – fought over in the public sphere – but somehow Pakistan remains a vague topic. “How is the idea of Pakistan articulated, debated, fought over in the public sphere? How is popular mobilisation happening in pursuit of this goal?” are Dhulipala’s questions.

Dhulipala’s book manages to throw light on these issues for the BLF audience. He highlighted the existence of critiques of Pakistan emerging from muslim community itself. The book captures this intra-Muslim debate over the emergence and existence of Pakistan. “I argue that Pakistan is not a vague idea that happened in 1947. It’s imagined as a new Medina. An ideal islamic state that will be created in the 20th Century, which will not just be a refuge for Indian Muslims but will have an impact on global Muslims.” says Dhulipala.

Co-panelists Anam Zakaria and Aanchal Malhotra had more personal takes to offer to the discussion. According to Zakaria, in Pakistan the partition is seen as a victory, but if you are nostalgic, and you want to reconnect, you could be construed as a traitor. This is similar to what’s happening in India as well. Partition penetrates everything – media debates, education curriculum, et al. “You see it as a victory, or you feel patriotic because of the bloodshed, suffering and sacrifice of lives that happened. Under the larger narratives that have been influenced by the sate, there are these smaller more important memories and nostalgia,” she says. People from Lahore and Meerut want to go back, sometimes, perhaps just to visit. There is a longing but it has been repressed by the state. In India, the space to talk about the nostalgia is more because there’s a sense of loss associated with the partition. But the educational curriculum talks more about wars and bloodshed, instead of taking the responsibilities to talk about the deeper, more delicate matters connected to the heart. This is where the responsibilities of the older generations – walking talking repositories of good memories and nostalgia –  are important

Though Malhotra agrees, she also brought up the stigma attached to the event, that makes it difficult for the older generations to really talk about the episode. “Theres a lot of silence around the partition. It’s unfortunate that we’ve forgotten that there’s a silence. It’s a deep wound that nobody wants to talk about unless prodded. Grandchildren come with a sense of curiosity. The minute you immerse yourself in raw memory, that has been untouched for a while, there’s something beautiful that happens – which is the case with antiquities”, she says. “The memories connected to objects that my father showed me has stayed with me.” Antique objects act as catalysts for these conversations. They are objects that open the doors to memories of the person during migration. “Memories are porous, people infuse their own experiences into these true memories which is what makes these stories about the partition so much more interesting and touching,” she says. The same, however, may not be said about the partition in the east, which according to the panelists is a far more multilayered problem. Wherever Aanchal Malhotra shared stories of her grandfather related to partition, she touched everyone, hearts. Maya Mirchandani, who was moderating the session, also shared a story of her grandmother and how partition affected her.

“So can all three countries ever be one again?” you’d ask, though we all know the answer.

The complexities of that time were different and the generations today and would not be understood today. It’s better to coexist better than wanting a ‘One-ness’. No country would want to feel swallowed back by the other.

By Apoorvah Sankaran and Mohit P