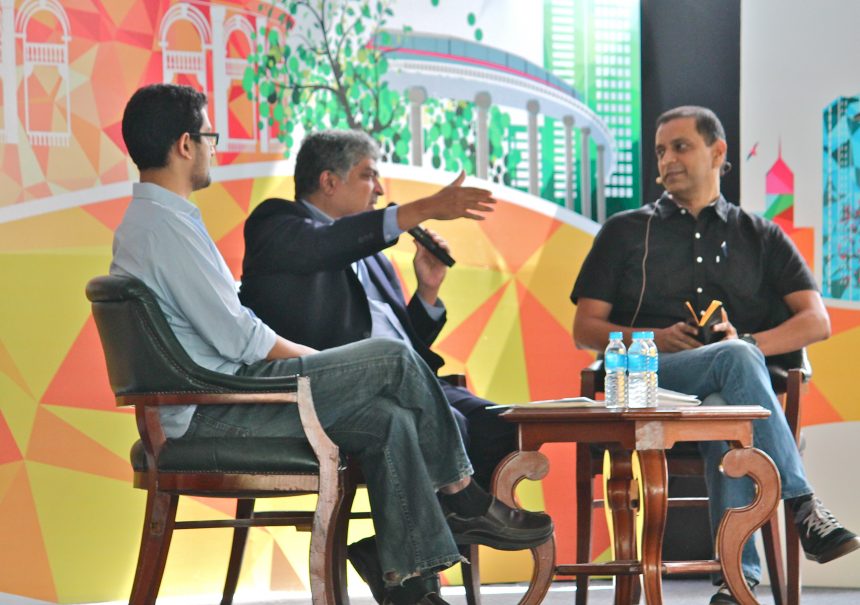 If ever there was a Bangalorean who needs no introduction, it would be Nandan Nilekani. The entrepreneur, bureaucrat and politician co-authored his most recent book titled ‘Rebooting India’ with Viral Shah, the founding partner of Julia Computing. Shah has worked at the intersection of policy and technology at the Unique Identification Authority of India.

Opening the discussion, Nilekani talked about having met very capable people and said that finding people is not a challenge. The real challenge, according to him, lies in the actual implementation of the program. In implementing the UID, Nilekani credited his efficient network of contacts and mentioned the fact that he had dealt with numerous politicians, bureaucrats, and academicians and almost everyone wanted to join them.

The trick was to actually go to the people instead of letting them come to him. Nilekani made it a point to meet the Chief Minister in every state and their secretaries in order to persuade everyone to get on board.

Shah spoke about his experience meeting Nilekani at a conference. Prior to this, he had never worked in governance. When they first met, he asked Nilekani about the ways in which he can contribute to society. Nilekani suggested that Shah attend some meetings and then make an informed choice.

Shah mentioned that the key was to have a goal to focus on. “I was 29 when I joined Aadhar and I would say it was Nandan Nilekani and Ramshevak Sharma’s leadership skills that helped me learn a lot.”

Samar Halarnkar, Editor-at-large of Hindustan Times, moderated the session and added to the discussion with a few facts about the problems faced in Delhi. There are some 60,000-70,000 trucks that pass Delhi during night and contribute to 30% of the pollution for the NCR.

Addressing this problem, Nilekani said that a large part of the trucks pass through Delhi and travel to UP or Rajasthan. He suggested collecting a pollution charge from them, stating that with the help of RFID tags this process would become easier. He further elucidated that the same tags can be used on cars to charge a congestion tax and it can be automatically debited from their account.

Halarnkar asked that if it was so easy, why had it not been implemented yet?Nilekani responded by saying that solving problems with data and software is far easier than doing so with hardware. The poor who depend on government services here face the most number of problems. He noted that mobility is important. People keep migrating from one place to another, and if they don’t vote in their cities, they are going to lose out.

Referring to the intent behind his book, Nilekani said he wanted to talk about the things that he had done. Based on this, if one wanted to extrapolate lessons for the future, that could be done.