Separated at Birth – India & Pakistan at 70 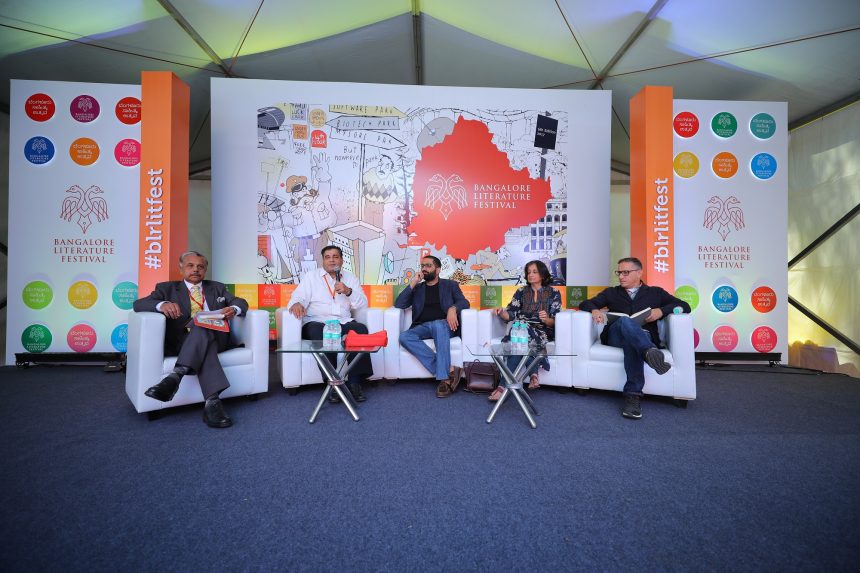 The realization of true ramifications of the partition of India would be perhaps an ever-developing phenomenon and the people of the divided regions would have to look back at the tragic beginnings of the process every once in awhile. When we stand at a distance of about 70 years from the partition, it would serve us well to look back and measure our progress in all the years in between then and now. The session ‘Separated at Birth – India & Pakistan at 70’ was aimed at such an introspection and a measured reflection of the ever vacillating fortunes of the two countries.

Journalist and filmmaker Adrian Levy, Lt. General Kamal Davar who has written ‘Tryst With Perfidy – Pakistan and its Deep State’, Former IFS officer and Indian High Commissioner to Pakistan (2013-15) TCA Raghavan, and feminist publisher and writer who has authored ‘Borders & Boundaries: Women in India’s Partition’ formed the panel with Nitin Pai, the co-founder and director of the Takshashila Institution playing the moderator. Nitin Pai brought in Bangladesh too to the equation and asked Raghavan about what Pakistan got right in the last 70 years. Raghavan began by explaining how the partition was an event that affected not only India and Pakistan but there were about three to four more partitions that took place at the same time. With India and Pakistan, Punjab was divided and also Bengal was divided. The Pathans were divided by the Durand line between Pakistan and Afghanistan. Apart from these, the muslim community itself got divided. This partition did cast a shadow that continues to live till today. Coming to the question of what Pakistan had done right, Raghavan quoted a South Korean Ambassador who once told him that he envied our relationship with Pakistan pertaining to the shared lifestyle and choices. This was because we are doing just fine when compared to South Korea – North Korea. Pakistan and India also worked together on the complex issue of the Indus water sharing.

Pai asked Davar if the Indian army had an admiration for the Pakistani army. Davar admitted that both the armies shared a common root and hence there is a sense of admiration but the attitude from the other side had been myopic and they have harboured a pathological and obsessive hatred towards India. In the same breath, he also appealed to all the political parties that when it came to the issues of national security, they must not politicize them.

At this point Ritu was invited to bring in the Bangladesh angle by the moderator. Ritu said that she was essentially a partition family and life had become a before and post-partition phenomenon in her growing up years. “The partition was being lived by the divided families and not by the army or the government.”, said Ritu. Ritu explained that she had started studying the partition from all the three perspectives of India, Pakistan, and Bangladesh and found out that the the partition study was essentially a preoccupation of the Indians. While Pakistan developed a new nation narrative and Bangladesh developed a revolution centric narrative, they never had a desire to look back at partition. Ritu lamented the absence of any kind of historiography of Pakistan and Bangladesh partition. For her, partition has remained an unfinished business for all the three countries. “Even for the partition of Bengal in 1905 and 1911, no one really knows anything.”, added Ritu.

Adrian joined the discussion from a traveller’s perspective. Since he has travelled extensively on both sides of the border and has not been tainted by diplomacy, he has seen a struggle for democracy in both the countries. He spoke of successive failures of democracy in Pakistan, Nawaz Sharif’s ouster being the latest, and how this was a bad thing for India. On a euphemistic tone, Adrian told the audience that Imran Khan who calls himself a crusader for freedom of speech and democratic values, owns the largest residential property in the protected green belt of Islamabad and the waste water from his wash dumps into the reservoir that supplies water to the city implying that Imran Khan was perhaps doing the same to the country. Adrian also spoke about the role of China and Iran in the equation.

While Dawar admitted to be an unabashed admirer of Indira Gandhi for her role in one of the most crucial victories of the Indian military, Raghavan said that leaders like Indira Gandhi or Bhutto in Pakistan had deeply divided legacy. However, it was also true that the democratic institutions of India have always set a benchmark for the neighbouring countries.

The panelists mutually agreed that India has at times exaggerated its role in Pakistan and Bangladesh. Raghavan said, “Pakistan has 200 million people and is nuclear-armed. What India can do to foster democracy in Pakistan is a superficial question. It is for the people of Pakistan to do it. All we can do is play immediate neighbours.”