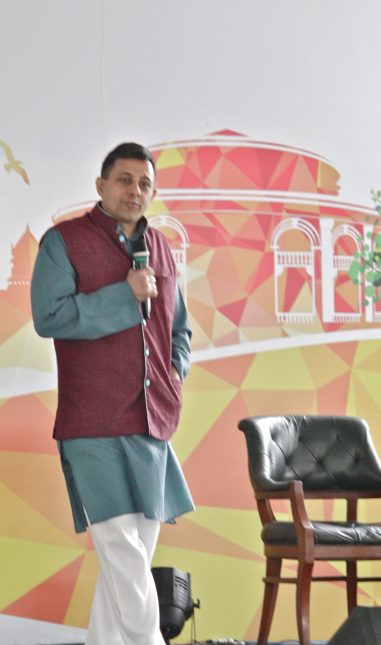 The second day of BLF started with a session which was bound to serve the audience with food for thought, as it was based on an interesting topic being discussed by an expert on the subject.

Despite it being his first literary festival, Anuj Dhar captivated the crowd with his logical and proof-supporting statements. He began by taking everyone back into history, while discussing about Subhash Chandra Bose and how the famous freedom fighter’s manner of death was swept under the carpet and covered up.

He spoke about ‘Mission Netaji’, saying, “In that age and time [2004] it was not possible to capture the attention of mainstream historians or journalists about Subhash Chandra Bose.” He also spoke about the first step of this journey – After the RTI Act was passed in 2005 – when he and a few of his colleagues filed a simple application with the Ministry of Home Affairs, demanding the exhibits related to Subhash Chandra Bose.

He highlighted the setbacks involved, for example, within 15 days of the application, they got a reply saying that these papers can’t be given; some also said that they do not have any exhibits at all.

His hard work paid off when the documents were provided to them after he produced a classified list of exhibits. Yet, out of 220 documents, only 90 were provided. Most of the sensitive data was not given to them.

He mentioned an interesting fact: when the documents were given to the National Archives, 10,000 out of 70,000 papers were provided, which pointed towards the possibility that every family member, close and distant, were being spied upon. Anuj Dhar threw immense emphasis on his belief that there was heavy spying occurring across states; everybody was being snooped on, and this information was being supplied to the British.

He discussed the three conspiracy theories revolving around Netaji’s death, which are:

He substantiated his point by saying that in one of the reports provided to the Government of India, it clearly points towards the fact that Netaji probably didn’t die in the plane crash.

He made another revelation, saying “sacred INA money/treasure was looted” by the government officials. He stressed on the fact that around the time of 1946-47, India and Russia had good relations, yet no one from India asked the Russians if Netaji was really with them or not.

He mentioned that now 33 out of 41 classified documents are going to be released, and that it is going to have a tremendous impact on the government and the intelligence running in this country; it is not just a part of history. Declassification is the need of the hour, and it has to be comprehensive by including papers from the IB, RAW and the ones kept in private custody with the Prime Minister as well. He stressed on the fact that the snooping scandal must be taken into account; a government cannot spy on its own people.

The session ended with a question-answer round with the audience, but looking at the revelatory nature of this discussion, it stirred up a new reserve of questions which have remained unanswered for years now.